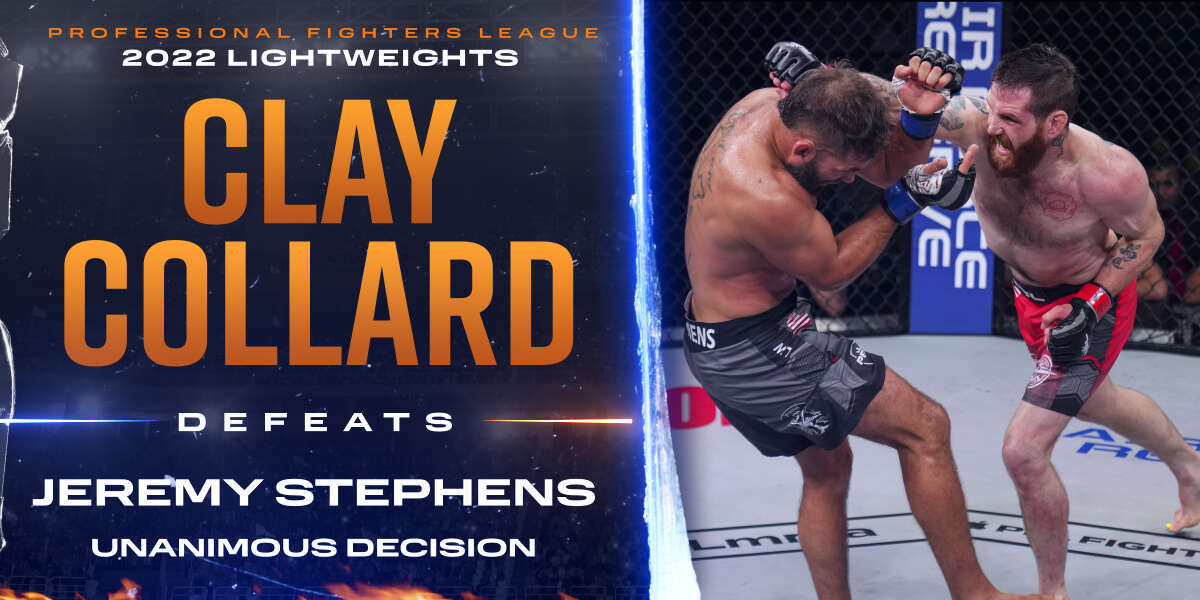 What a main event we have on tap here.  Lil Heathen Jeremy Stephens looks to pick up his first win of his post UFC career and meets the always game Cassius Clay Collard in the SmartCage for his PFL debut.  Notably, Clay spoiled the PFL debut of Anthony “Showtime” Pettis last year and as such is no stranger to taking on big names in big moments.  This one should be VIOLENT folks, so strap in, grab a beverage, and lets enjoy a battle.

The bell rings and both men look to take the center of the cage.  Stephens throws a big right and a heavy leg kick behind it that seemed to bother Collard.  Again, Stephens lands a big right and follows it up with that same leg kick.

Collard, clearly bothered by those strikes, closes the distance and initiates the clinch.  Neither man really gets anything off and they break.  Collard now holding the center well but don’t blink! Stephens lands a bomb of a right that backs Collard up.  All action through 90 seconds as advertised.

Collard lands a big right of his own that draws a big reaction from Stephens.  Collard now starts attacking the body with hooks and he seems to be finding the range.  Stephens might be regretting coming out as hot as he did as he already seems a little fatigued.

MASSIVE exchanges here as both guys land big shots.  Collard lands a big combo with 2 body uppercuts and a lead hook and we have a clash of heads as Collard leaves the pocket.  The ref stops it but we’re good to go and back to the action with 2 minutes to go in the round.

Both guys still throwing GAS here, Collard has a freakish chin!  Stephens complaining about a phantom headbutt as Collard continues to have success going to the body.

Those body shots seem to be adding up as Stephens takes some deep breaths and seems to have a little less pop on his punches.  Collard changes levels but abandons it and throws a nice body kick on the break.

Collard really picking up momentum now and finishes the round with a flurry of strikes and knees.

That round was everything it was supposed to be on paper.  Please sir, may I have another?

We’re underway in round 2 and after about 15 seconds of feeling out, we’re back to both guys throwing bombs.  Stephens catches Collard low early but Collard insists on not using the time.

Stephens lands a nice combo that backs Collard up briefly but Collard gets right back to it with the bodywork.  Stephens lands a HUGE overhand that backs up Collard again but again, he just keeps coming forward like he’s the damn terminator.

Stephens initiates the clinch after another flurry from both men as the pace is seemingly cashing up to both men.  Collard landing big knees and doing a great job framing off the clinch to land knees up high.

Stephens clips Collard again and CCC decides to shoot and gets the takedown.  Collard briefly keeps him down but Stephens pops back up and presses Collard into the cage.  Collard wisely attacks a kimura and uses it to escape.

Stephens looks to be fatiguing hard and while Collard is tired, he’s still keeping the volume up. 4 minutes into the 2nd and Collard has thrown over 200 strikes, just an insane pace put on by both men.  Stephens grabs Collards back but doesn’t seem to have a real plan for it other than catching his breath.

Collard goes for the high crotch and dumps Stephens to the mat and just walks off, one of the swaggiest moves these eyes have ever seen in a cage fight and that’s the round.

Round 3 opens and Stephens is clearly the more tired fighter.  Collard doing a very good job of using level changes to attack Stephens’ body on the break.

Stephens getting back to that leg kick he had success within the first but there’s clearly a lot less power there.  To Stephens credit, he’s still coming forward but again Collard rips quick combos to the body and he’s out of the pocket.

Collard doing a lot more fighting behind his jab in this round as the pace catches up to him.  Stephens lands a nice body shot but again Collard returns with a flurry to the body and a straight to the head.

Collard hits a Muay Thai sweep and just walks away again with no intention of following him to the ground.  Stephens gets back to his feet and swarms Collard, attacking the body and drawing a reaction.

Stephens now changes levels and attacks a double leg and Collard uses that same Kimura grip to get out of the grappling exchange.

With 30 seconds left in the fight, Collard starts dancing a little bit and getting cocky.  Well earned, but he’ll have to be careful with an opponent like Stephens.

The 10-second bell rings and both dudes let it rip. Stephens throws an illegal elbow but nobody seems to really care.  These warriors threw almost 500 strikes between them and delivered an all-action main event. Tip of the cap to Ray Sefo and the big brains at PFL for a delicious bit of matchmaking here. What a war.

And there it is, Collard gets the 30-27 and continues to play spoiler for PFL’s big free-agent acquisitions.  Who cares though, nobody lost that fight and the biggest winners were the fans.