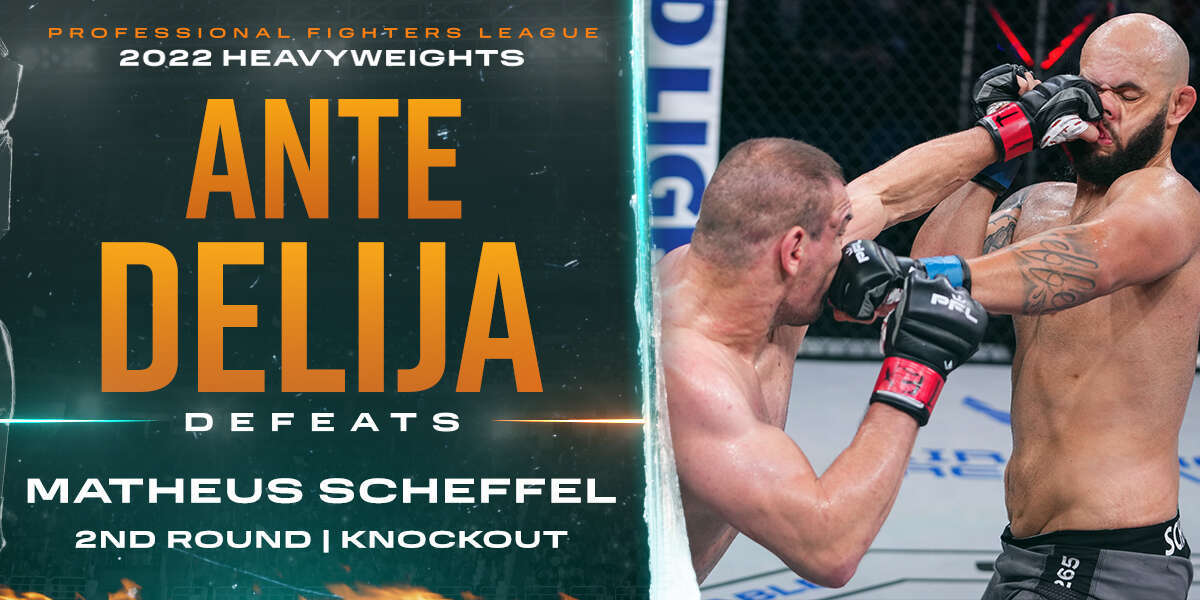 In what is guaranteed to be a fun heavyweight slugfest, 2021 Finalist Ante Delija (19-5) welcomes PFL newcomer Matheus Scheffel (15-7) to the Smartcage. Delija, a Croatian native and Mirko Cro Cop protégé has won 5 of his last 7 with his only 2 losses in that span coming to 2021 PFL Champion Bruno Cappelozza.  Delija’s championship bout with Cappelozza was widely regarded as one of the best fights in all of combat sports in 2021.  Delija looks to add to his 14 stoppage wins tonight, but he’ll have a very game opponent standing in his way in Scheffel.

A 3x Brazilian national muay thai champion, Scheffel brings some very impressive striking credentials into the Smartcage for his debut.  Scheffel, winner of 3 of his last 4, has only fought twice outside of his native Brazil going 1-1 in those bouts. Scheffel comes into the PFL season with the hopes of honoring a promise he made to his late mother to win the title.  It’ll be no easy task in a stacked heavyweight division.

We open with a nice 1-2 from Delija as he controls the center of the Smartcage.  Scheffel very clearly respecting the power of Delija early and not looking to hangout in the pocket.

1 minute in and we only have 4 strikes thrown between both fighters but you get the sense something real big and real violent is coming.

90 seconds in Delija feints a jab and shoots in perfectly on a double, really nicely set up.  Scheffel briefly fights it off, but Delija is able to run the pipe on the single and get it to the mat.  Delija is only able to maintain top control for 20 seconds or so before Scheffel is able to work back to his feet.

Delija is making Scheffel carry his weight against the cage and about halfway through the round, Scheffel is able to turn his hips in, create some space, and circle out.

They reset in the middle of the cage, Scheffel throws a high kick that almost lands flush, and Delija comes back with a left that DROPS Scheffel.

As quick as he went out, Scheffel regains consciousness and is trying to work back to his feet and defending well, impressive to not get finished there.

With about 40 seconds remaining in the round Scheffel is able to get back to his feet but he can’t seem to break the clinch and Delija is heavy on him.

Not a ton of action in that round but the knockdown makes it easy, 10-9 Delija. Have to wonder if missing that chance at 6 points and a 1st round finish will come back to bite him as the season goes on.

We’re underway and Scheffel appears to have his wits back about him.  Scheffel is coming forward and gets his head snapped back with a jab and oh me oh my, Delija lands a big right down the pipe and that’s going to be a wrap.

Delija swarms with ground and pound and the ref has seen enough, that’s a 5-point 2nd round finish for your 2021 runner up as he plants himself firmly atop the heavyweight standings!

OHHHHHH! 1st KO of the night goes to Ante Delija!

He moves on with 5 points in the Heavyweight Standings#2022PFL2 pic.twitter.com/r0gK8yu2SN

Please disregard my questions about whether or not Delija would regret letting that fight get out of the first round.  Ante Delija picks up 5 points with a 2nd round finish, our first finish of the night!