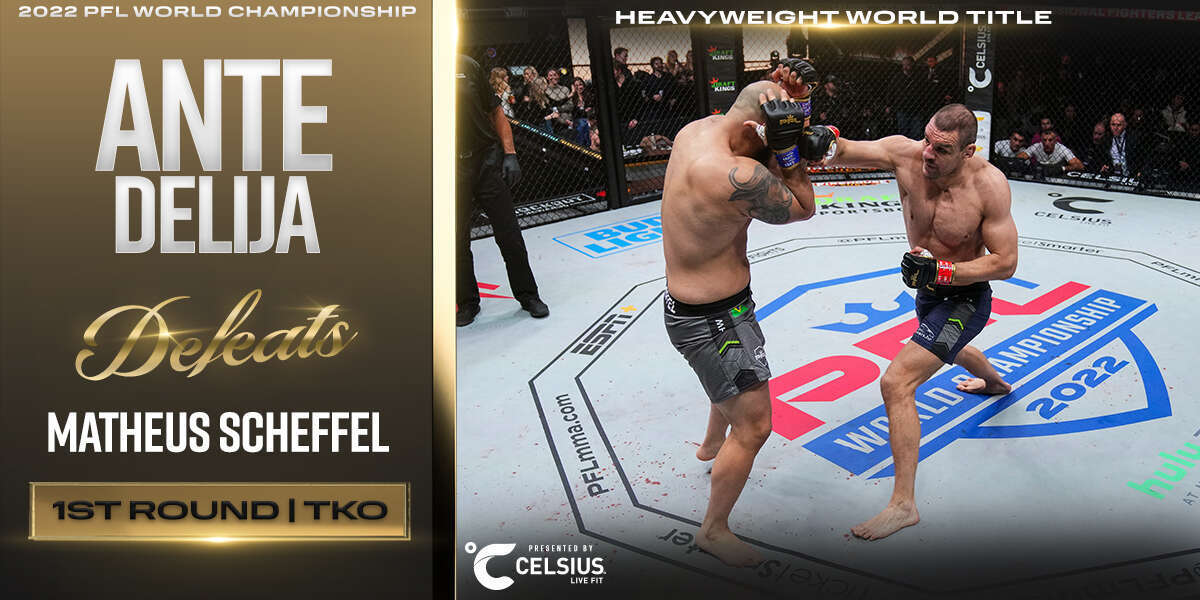 It’s time for the big boys! Mirko Cro Cop protege, 2021 Semi Finalist, and #2 seed Ante Delija (22-5)  will look to repeat a result from the regular season as he meets #5 seed Matheus Scheffel (17-8) who made the postseason as an alternate and stunned the fight world with a unanimous decision over reigning champion Bruno Cappelozza to cap off the regular season before finishing Juan Adams in the Semi Finals. Scheffel is looking for revenge after Delija put him on a highlight reel in their first meeting of the season, and Delija is looking for redemption after coming so close but falling short in the 2021 PFL fight of the year against the aforementioned Bruno Cappelozza in last year's PFL Heavyweight World Championship.

The opening bell rings and there is a clear respect for the power on both sides here as both fighters feel each other out.  Delija strikes first with a nice hook combo to the body and head.

Scheffel begins to look to establish his jab but is having trouble getting inside on the bigger, longer Delija who lands a powerful right hand over the top that briefly staggers Scheffel.

Delija changes levels and looks to implement his impressive judo but Scheffel is defending well so far.  Scheffel attacks and breaks the grip before circling back out to range.

Both men land BIG hooks but it appears Scheffel took the worst of the exchange.  Delija smells blood and opens up as Scheffel tries to stay on his feet but it’s too much!  Delija unloads a barrage of punches and Scheffel hits the mat, the ref has seen enough! Ante Delija is your 2022 PFL Heavyweight World Champion!

REDEMPTION FOR ANTE DELIJA! HE IS NOW THE 2022 PFL HEAVYWEIGHT WORLD CHAMPION!

In a surprise to nobody, this fight doesn’t make it to the scorecards and Ante Delija will be crowned your 2022 PFL Heavyweight World Champion! Croatia has a PFL World Champion and a newly minted millionaire!