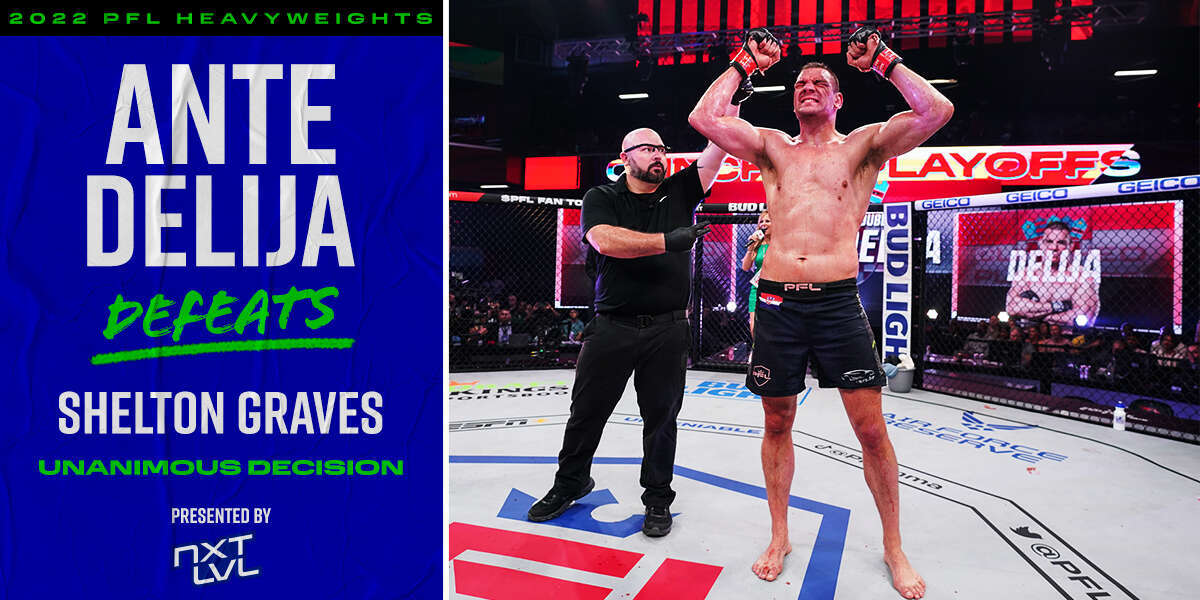 Since a broken leg in a 2015 fight in M-1, Mirko Cro Cop protégé Ante Delija (20-5) has lost only to 2021 PFL World Champion Bruno Cappelozza. Delija finished his first fight of the season in stunning fashion, knocking out Matheus Scheffel in the 2nd round. Across the SmartCage stands PFL debutant Shelton Graves (9-5) who has not fought in 2.5 years and has not won an MMA fight since October of 2018. Graves looks to right the ship and unlike Delija will need an early finish and some help to have any hope of making the playoffs.

In last year’s Heavyweight championship, Delija and eventual champ Cappelozza put on one of the best fights of all of 2021 across all promotions with a back and forth brawl that was nonstop action from bell to bell.  Delija clinches a playoff spot with any victory tonight.

Though Graves luck has been sour of late, he is still well credentialed.  He was a champion in ROC, GPG, and FFC and is a Dana White’s Contender Series alumni.  As previously mentioned, he will need a quick finish to have any hope of competing for a PFL World Championship and 1 million dollar prize.

Delija instantly takes the center of the SmartCage and begins probing with his lead hand.  It’s obvious early Graves respects the power the Croatian carries in his hands.

Graves is throwing but not landing as Delija is able to move laterally and stay out of danger before Graves initiates the clinch, perhaps feeling he is safer in close than he is at the end of Delija’s striking range.

Graves is fighting smart here, wearing on Delija and making him carry the weight, likely hoping to slow him down a bit early in the fight.  Delija pummels for double unders and reverses position but only briefly as Graves circles off the cage only to be reversed again.

Halfway through the round Delija breaks the clinch and starts stalking Graves, using a lot of erratic lead hand movement to disguise his attacks before landing a big straight right that gets the attention of Graves.

With 90 seconds remaining, Graves pushes Delija back with a flurry before landing a flush left hand that Delija seems unfazed by.  With a minute remaining we have an inadvertent clash of heads and the ref pauses the action, but only for a brief moment.

Delija is the much bigger, longer man but isn’t using his advantages much early as Graves lands a jab and Delija fires back a 1-2 that connects.

As the 10 second clapper hits, both men let their hands go and Delija gets the best of the exchange, also landing a shot well after the bell to the referee’s protests.

As the 2nd round begins, Delija seems to be wearing a bit of damage from the headbutt above his left eye. Delija again takes the center of the cage and begins to stalk Graves, patiently looking for an opening.

Graves is a bit flat footed here and seems to be tiring early as Delija lands 2 right hands and clinches, but Graves is able to secure over under position and reverse, winding up pressing Delija’s back to the fence.

Graves is working the body in the clinch here but again gets reversed by Delija who secures double underhooks.  The ref doesn’t see enough action and separates the fighters.  Both men miss before Delija lands another big right hand that gets Graves moving backwards again. Again Graves dips his head as Delija enters and heads clash, this time the referee takes a point from Graves who has now led with his head twice.

The action restarts and Delija once again secures double underhooks and is wearing on Graves against the fence, but not doing much damage.  Delija now changes levels and attacks a takedown but Graves is able to secure an underhook and fight it off before reversing position along the SmartCage.

The 2nd headbutt appears to have really damaged Delija’s nose which could be affecting his breathing and gas tank.  As we hit the 30 seconds remaining mark, Delija lands a small flurry before reengaging the clinch and riding out the round.

With the point deduction, Graves will almost certainly need a finish to win the bout, and he has already been eliminated from playoff contention.

It’s more of the same to start round 3 as the fighters jockey for position in the clinch.  Delija briefly looks for a judo toss but there’s nothing there as Graves reverses position and around and around we go.

Delija breaks and circles off nicely, throwing a big 1-2 that doesn’t land. The fighters clinch again and again Graves leads with his head and nearly catches Delija who appears visibly frustrated at this point.

Delija now has the double unders but can’t do anything with it as the fighters spin along the cage like a carousel and Delija’s nose bleeds profusely from the headbutt.

They trade knees in the clinch and still Graves is leading with his head, getting lucky not to connect with Delija and lose another point.

Graves is still doing a good job keeping this fight in tight and not giving Delija the space he needs to get off big power shots, but he has not gotten off much significant offense of his own.

Delija lands a big left hook on the break and Graves seems visibly exhausted at this point. Delija disengages once again and walks Graves down before Graves attempts a takedown late but can’t finish it. We go to the judges.

Ante Delija advances to his 2nd consecutive PFL Playoffs with a decision victory.