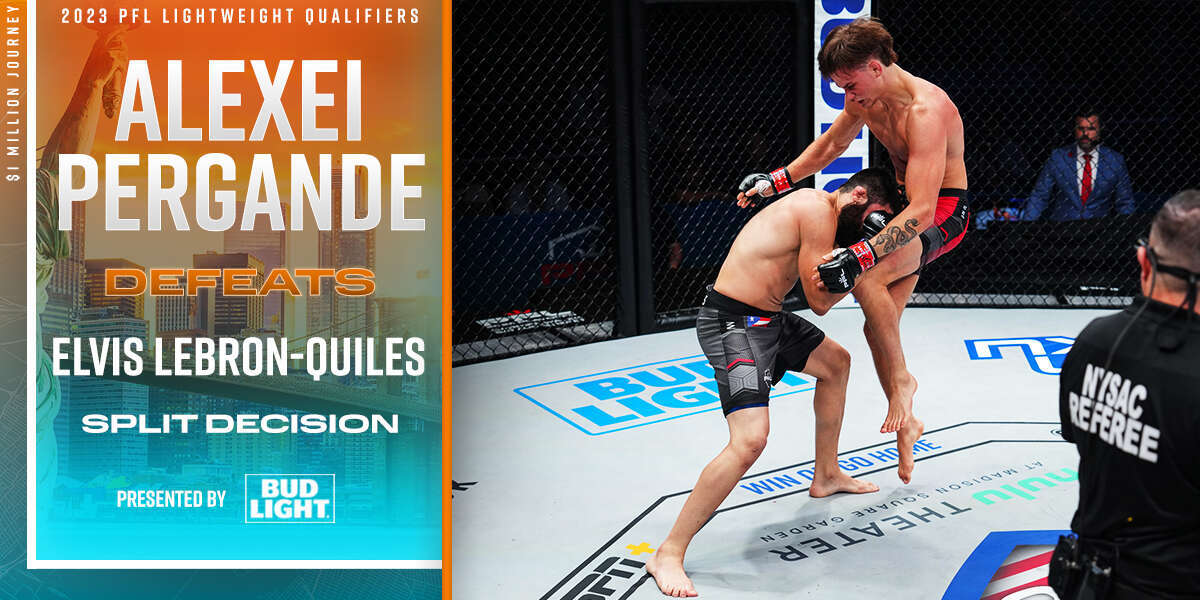 The fight begins and it’s Lebron-Quiles coming forward early, changing levels following a big right hand. He’s unable to secure the takedown but keeps the clinch position, landing a big knee to the body of Pergande in the process.

Pergande pummels for an underhook and reverses position before disengaging but staying close enough to keep the pressure on. Lebron-Quiles tries to move laterally to get away and Pergande is all over him, landing some nice punches and a little flying knee before securing a takedown of his own.

Pergande is heavy on top in half guard now as he fires some short ground and pound and starts trying to attack the neck of Lebron-Quiles. Lebron-Quiles is able to work back to his feet and break before Pergande takes him down again with a trip that created back exposure.

The bodylock is in and Pergande has half a round to work with dominant position now as Lebron-Quiles fights the hands and looks to turn into Pergande and get himself on top. Pergande attacks an anaconda choke and gets in deep but Lebron-Quiles weathers the storm and gets back to his feet, great back and forth bout so far.

Lebron-Quiles throws a big right and misses, exposing his hips and allowing Pergande to secure another takedown and wind up in his closed guard.

With 20 seconds remaining Pergande postures up and fires a big right hand straight down before taking the back to finish the round in dominant position.

Pergande lands a big punch to open the round but Lebron-Quiles will not go down without a  fight, returning with a high kick that Pergande narrowly blocks. They clinch again and this time Lebron-Quiles is able to fight off the takedown attempt but one gets the feeling Pergande is exactly where he wants to be.

This time Pergande shoots and drives through the double leg to land on top in full guard. He’s posturing up and getting off some big shots and looks very calm and collected for a fighter in only his 2nd pro bout.

Lebron-Quiles finds some success with the hands, landing a lightning quick 3 punch combo that forces Pergande to briefly reassess before again engaging in the clinch.  Lebron-Quiles is making it dirty now, getting off some big short uppercuts and hooks in these clinch exchanges.

Pergande is fighting behind his kicks now, beautifully using the teep to find the range before letting the hands fly. Oh! Lebron-Quiles jumps the guillotine and it’s in tight!  Pergande was in danger there briefly but stays calm and measured beyond his experience level, freeing the head and posturing up to do some damage.

As the 10 second clapper hits, Pergande postures up to attempt to put a stamp on the round, landing big right at the bell.

We begin our final round and Lebron-Quiles comes out swinging, exactly what you want to see from a fighter who is likely down 2 rounds.

Wisely, Pergande clinches again to negate the threat and looks to take the fight to the mat where he has excelled all night long. He’s unable to do it this time however as they break and he retreats to the center of the SmartCage. Pergande perfectly times a shot and bowls right over Lebron-Quiles.

However Lebron-Quiles has no quit in him! He snatches an omoplata and uses it to transition to an inverted triangle, but only briefly as Pergande quickly escapes danger and winds up on top before Lebron-Quiles is able to work back to his feet.

At this point Pegande seems content to coast to victory with a dominant clinch position and the onus is all on Lebron-Quiles to make something happen. They separate and briefly return to range before Lebron-Quiles initiates the clinch and attacks a takedown.  He can’t get it to the mat and briefly controls Pergande before being reversed. They break the clinch and Lebron-Quiles lands a nice knee to the body with a right hand behind it!

The fighters exchange a fast flurry of strikes before Pergande again returns to relative safety in the clinch as the round winds down. The round will end in a familiar position, with Pergande peppering knees and Lebron-Quiles with his back to the SmartCage.

Alexei Pergande guarantees himself a spot on the 2023 PFL Challenger Series, showing poise well beyond his experience in only his 2nd pro bout.