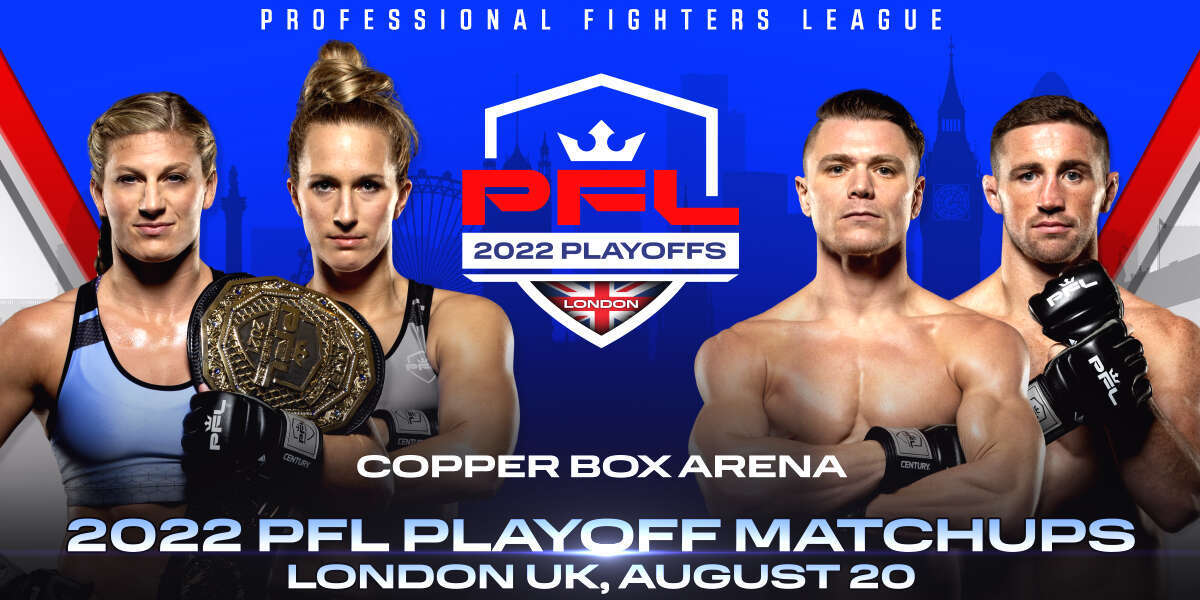 PFL signs top British women’s flyweight prospect Dakota Ditcheva to a multi-fight
contract, she will debut on August 20 in London

NEW YORK (JULY 13, 2022) - The Professional Fighters League (PFL), the fastest growing and most innovative sports league in the world, today announced the finalized 12-fight card for the third Playoff event of 2022 to be hosted at Copper Box Arena in London on August 20 and broadcast on ESPN networks and streaming platforms.

The “Baddest Woman on the Planet” Kayla Harrison will return to the city where she won her first of two Olympic gold medals as she looks to add another piece of precious metal to her trophy case. Harrison has won PFL World titles in each of her two seasons in the league and she’ll put her perfect record on the line when she takes on Czech Republic’s Martina Jindrova in the main event. Jindrova has had quite a run in 2022. It started with a contract-winning performance in the Challenger Series and continued with a pair of wins during her first PFL Regular Season.

Chris Wade may have been overlooked after making the drop down to the featherweight division ahead of the 2021 Season but the Long Islander opened everyone’s eyes when he made a spectacular run to the Finals in his first year at 145-pounds. He’s looked even better in 2022. After outpointing two-time PFL champ Lance Palmer, he made short work of the gritty Kyle Bochniak to secure the top-seed. He’s had his eye on Brendan Loughnane for some time and there is no love lost between these two competitors. The fiery Brit has verbally sparred with Wade over the course of the year and now the two will have their chance to settle it in the cage. Loughnane is especially excited to be returning to the UK after nearly four years of fighting abroad.

There has been a lot of talk about Harrison after her back-to-back PFL titles, but Larissa Pacheco has been nearly as impressive over her three seasons in the league. She has rattled off two first round stoppages to run her streak to four straight first round victories since losing to Harrison in the 2019 finals. While her ultimate goal is to avenge her two losses to Harrison, Pacheco will have to get past Olena Kolesnyk in the semifinal first. The two women fought in the 2021 Season where Pacheco knocked Kolesnyk out. The Ukrainian will seek to avenge that loss and earn her first PFL finals berth.

Ryoji Kudo was a tough luck loser in the first half of the season after an accidental headbutt opened up a nasty cut in his back-and-forth duel with Loughnane. Undeterred, Kudo returned for the second half and promptly dispatched Alejandro Flores in the first round to secure a place in the postseason. He’ll face off with former NCAA Div. I wrestling champion Bubba Jenkins for a chance to fight for the featherweight title and the $1 million that comes along with it.

“Heading to London is huge for the expansion of the League,” said PFL President of Fighter operations Ray Sefo. “We are bringing our brand of MMA to the UK and I’m sure they are going to be as excited as I am to see elite fighters like Kayla Harrison, Chris Wade and Brendan Loughnane compete with so much on the line.”

The final Playoff event will also feature British MMA star Dakota Ditcheva making her PFL debut. Ditcheva, who was one of the most sought-after athletes in MMA, chose the PFL to continue her transition into MMA. The three-time Muay That world champion and undefeated MMA fighter is regarded as one of the sports hottest prospects. The Manchester native is the daughter of World Kickboxing champion Lisa Howarth.

“We are excited to add Dakota to the global PFL talent roster,” said Sefo. “Dakota’s outstanding skillset and ability, along with her natural charisma fit perfectly with the PFL brand of MMA. We believe the PFL is uniquely placed to take her journey forward on a global scale. Coming from a line of elite Muay Thai practitioners, we have confidence in Dakota to go to the very top with the PFL and continue her family’s legacy.”