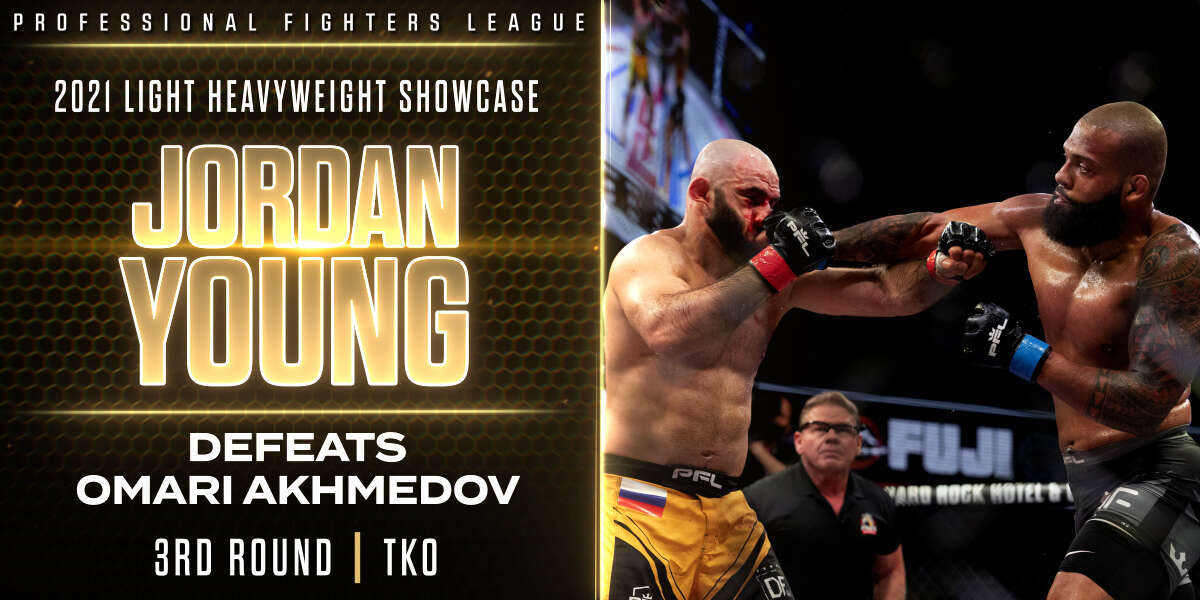 At 9-5-1 in 15 UFC fights, the American Top Team product by way of Dagestan firmly cemented himself as one of the world’s best mixed martial artists throughout his nearly 12-year professional MMA career.

Facing submission ace Jordan Young, Akhmedov looked to make a splash and establish himself as a name to watch under the PFL banner moving forward.

Could he get it done?

Omari Akhmedov vs Jordan Young: Both fighters are in the SmartCage and ready to scrap!#PFLChampionship LIVE NOW
🇺🇸 ESPN+
🌍 https://t.co/WfOt9XBfzk pic.twitter.com/0GnBxBzOYI

Young lands a low kick, and Akhmedov returns the favor to open things up. Now, Akhmedov presses forward, winging punches to close the distance and force Young against the cage. He gets the body lock, but Young’s showing off nice takedown defense to remain upright early.

Young turns and Akhmedov dives back on a double, but Young uses the cage to maintain his balance and avoid the takedown once again.

They break, but Akhmedov is immediately back on the takedown, and this time he gets it, dragging Young to the mat. Young, however, works back to his feet quickly, and they close the round on the feet, with neither man landing anything of significance.

Definitely a feeling-out process early here. Let’s see if they open up in Round 2.

How have you scored the 1st round so far?#PFLChampionship LIVE NOW
🇺🇸 ESPN+
🌍 https://t.co/WfOt9XBfzk pic.twitter.com/CB3b2Te7OT

Both fighters come out more quickly for Round 2, with Akhmedov looking to land on the feet while Young moves laterally and works a variety of strikes. Clearly, Young is looking to stay active and keep moving here, forcing Akhmedov to chase him down.

And that he does. Akhmedov lands a nice low kick that sends Young to the ground, and he pounces immediately, taking Young’s back against the cage. Young defends nicely early, but Akhmedov remains on the back, working to flatten out his opponent.

Akhmedov sees a small opportunity and seizes it, seemingly locking in the choke. Young, surprisingly, is fine, though, and he calmly turns out of the attempt and returns to his feet. Excellent composure from Young, and he now has Akhmedov pressed against the cage.

They separate, and things start to open up with 30 seconds to go as they trade powerful strikes. Some blood begins to show on Akhmedov’s face under his right eye, and Young lands a nice knee as his foe rushes in for the takedown.

Akhmedov eats it, though, and they end the round pressed against the cage once again.

It’s likely Akhmedov will take that round on the scorecards, but Young came on strong in the final 1:30, scoring his best offense of the fight. Let’s see if he can carry that into Round 3.

They touch gloves, and Young takes the center of the cage, looking to pressure Akhmedov. Two jabs land immediately for Young, and he’s looking crisp early in the fight’s final frame. Akhmedov lands an inside leg kick followed by a series of punches up top, but Young is feeling it, moving forward without care and landing his hands at will.

A huge right hand lands, and Akhmedov is stunned. Two more rights land, and Akhmedov shoots for a takedown. It’s not there, and they separate, Young continuing to land.

A massive uppercut floors Akhmedov, and the comeback is complete. Gary Copeland’s seen enough. Young needed a finish, and he got it.

DON'T CALL IT A COMEBACK! Jordan Young gets the KO in the 3rd round!#PFLChampionship pic.twitter.com/v6OyH9VCLq

And that is the beauty of MMA, ladies and gentlemen. A fight is never over until the final bell sounds, and Young just proved that point emphatically at the 2021 PFL World Championship.

That’s a huge win for him and a massive bounceback from his disappointing finish in the 2021 PFL Regular Season.