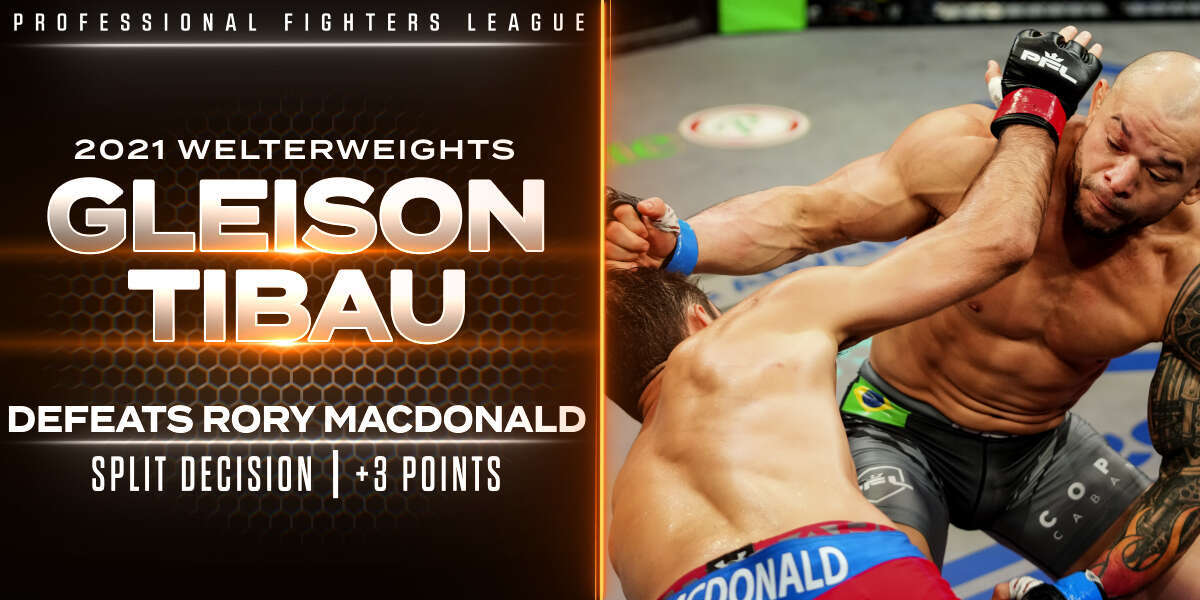 Ahead of the bout, MacDonald looked to be the clear-cut favorite, as he earned six points in the Welterweight standings with an impressive first-round finish of Curtis Millender at PFL 2, 2021 back in April.

Tibau, meanwhile, lost his 2021 PFL Welterweight debut against Joao Zeferino at the same event, giving him a goose egg in the standings and putting him in a must-finish situation against the talented Canadian.

Who implemented the better game plan and delivered on fight night?

MacDonald shows off some fancy footwork early, keeping Tibau at range and firing away with push kicks and punches. Tiabu, meanwhile, looks for the one-hitter-quitter, but nothing’s landing for him just yet.

MacDonald lands a straight right, changes levels, then reset and lands a 1-2. NIce short left from Tibau finds a home on MacDonald’s chin. As expected, it’s MacDonald controlling the distance and the pace early with a measured, calculated approach.

An eye poke from MacDonald garners a strong reaction from Tibau, who immediately yelps in pain and tumbles to the mat. Tibau blinks repeatedly and is getting checked out by the cageside doctor, who clears him for action after a brief pause.

Tibau’s eye is showing some redness, but it does appear he can open it without issue after the reset. Left hand from Tibau lands at range, and MacDonald dives in on a quick single. They separate, and Tibau explodes with a flurry of punches, which MacDonald largely avoids. After a brief clinch, they return to range to strike it out once more.

MacDonald with a slick entry to the takedown here, straight to the back of Tibau. He briefly searches for the rear-naked choke, but it’s on the chin, and Tibau survives. They separate, and the round concludes, momentum in the Candian’s favor.

Rory closes out the 1st round in dominant fashion!#2021PFL5 pic.twitter.com/QwtW85JCZP

MacDonald explodes out of the gates and drags Tibau back to the mat in the flash. Tibau works back to his feet along the cage, and the two separate after a brief clinch. Body shot from MacDonald lands, and Tibau shakes off a takedown attempt.

Head kick from MacDonald lands, but Tibau eats it well and continues pressing forward. Another takedown attempt fails from MacDonald. Tibau slips a right hand from MacDonald and counters with a nice uppercut that finds its home.

Two minutes to go in the round, Tibau needs a finish if he wants to qualify for the Playoffs. That said, there’s little urgency on his end, as he appears content to strike at range with MacDonald. It’s a struggle there for him, as MacDonald’s constant feints and level changes have proven difficult to crack time and again.

Tibau lands a series of hard punches late in the round, but it’s too little, too late, and the fight moves on to the third and final frame. With that, Magomed Magomedkerimov skates into the 2021 PFL Playoffs.

This third round is now a formality, as MacDonald is already in the Playoffs, while Tibau cannot advance.

Still, the two throw leather early, with MacDonald connecting on a crisp combo. Failed takedown from MacDonald, and the two have a quick conversation, seemingly about eye pokes. They separate and resume their stand-up chess match.

Oh no. Another eye poke from MacDonald, and Tibau is both momentarily blinded and angry. They split, Tibau recovers, and the action resumes. There’s a little more urgency from each fighter now, and MacDonald lands with a nice combination before threatening the takedown.

Tibau flashes a front kick that misses the mark, and MacDonald dances at range, looking for his opening. MacDonald pumps a jab, keeping Tibau at bay. A strong left hand lands for Tibau, but MacDonald largely shrugs it off and gets back on his bike.

Ten seconds left, and Tibau wings a jumping kick that misses by a mile. Fun fight, but likely a win for the Canadian here.

It doesn’t affect the Welterweight bracket one bit, but it does leave fans, critics, and media members alike confused after an otherwise strong and controversy-free night of judging.