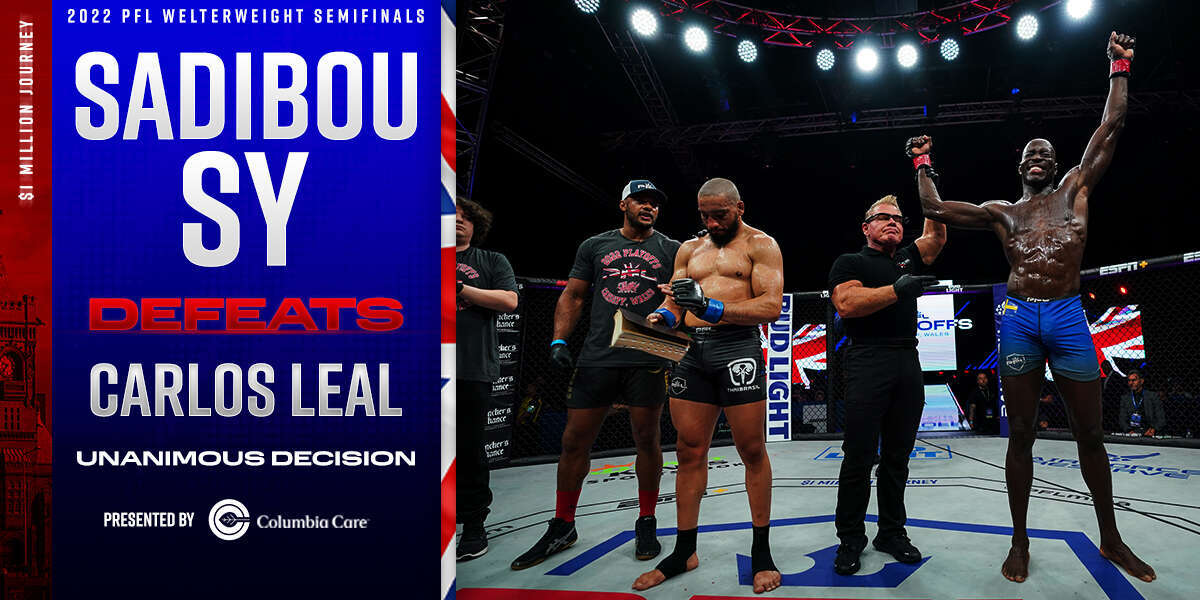 In our first Playoff bout of the afternoon, #2 seed Sadibou Sy (11-6-2) takes on #3 seed Carlos Leal (17-3) to determine who will be competing for 1 million dollars and a PFL Championship!  This is no unfamiliar spot for Sy, a 3x PFL Semifinalist making his 4th Playoff appearance. Sy comes into this bout following an impressive win over #1 Seed Rory MacDonald and looks to finally breakthrough to the PFL Championship.  Leal on the other hand won two bouts on the PFL Challenger Series this year, enough to earn himself a spot as an alternate for the PFL Regular Season.  Leal made the most of the opportunity, thoroughly dispatching reigning champion Ray Cooper III.

No touch of the gloves and Leal rushes to take the center of the SmartCage, firing a low kick which many consider to be Sy’s signature.  Leal is doing a good job pressuring and staying inside the kick range of Sy early, a gameplan that should serve him well.

Leal changes levels and looks for the takedown but Sy is doing a good job fighting him off, eventually pushing off and disengaging.  Sy fires a front kick to the body of Leal but Leal is still coming forward, well aware of the danger Sy carries in his kicks.

Leal lands a nice left hand over the top and it’s clear the gameplan is very pressure heavy to negate the kicks. One gets the sense Leal is stalking here early, walking Sy down and waiting for an opening for a big shot as he lands a nice uppercut as Sy dips his head.

A nice 1-2 gets home for Leal as Sy is really having trouble finding the range but Sy returns fire and partially lands a high kick before working to establish his jab, landing a small handful and temporarily halting the forward pressure of Leal.

The jab is doing some damage to Leal’s face as he is already bloodied but Leal lands another big left hand that briefly knocks Sy off his balance.  Sy is eventually going to need to fight off his front foot here as it seems like Leal is the one landing with more power early.

Another left hand for Leal! He’s having a ton of success with that big left cross early, setting it up with a probing jab and then firing it over the top.  Leal now engages in the clinch again briefly as the round winds down in a competitive one.

Leal again begins the round with heavy forward pressure, changing levels and looking for an early takedown.  Sy is doing a fantastic job with the defensive grappling, holding onto the wizzer and preventing Leal from finishing the takedown.

Eventually Leal is forced to give up on the takedown and break but he’s keeping the pressure on, landing another big left as Sy finds a home for his jab once again.  Now, Leal changes levels and is able to take Sy’s back on the feet.  Sy however is able to fight the hands and turn in to get face to face with Leal once more.

Leal lands a big uppercut and is really keeping the pressure on now, cutting off the cage, peppering punches, and mixing in level changes.  Leal lands a big hook followed by a knee to the body and Sy just might be in trouble here! Sy seems to be recovering though, landing a nice knee of his own before they reset and Leal lands a big body roundhouse.

It’s been all pressure from Leal so far in this round and Sy hasn’t had a moment to breather with a minute remaining.  Leal almost secures a single leg takedown but Sy is able to escape and retreat.  Sy lands a nice body roundhouse but it’s still Leal getting off the bigger offense so far although Sy has come on strong in the final 30 seconds of the round, finally stringing together some decent offense.  It’s anyone’s fight as we enter the final round!

We begin a pivotal 3rd round with a trip to the PFL Championship on the line!  Leal seems to be planning more of the same in this round as it’s right back to smothering pressure from the Brazilian.

Sy is looking to establish his jab again but isn’t finding a home for it the way he was early as Leal blocks a kick and charges into the clinch.  Leal catches Sy below the belt with a knee and we’ll have a break for Sy to recover.

In a shocking turn of events, the ref decides to take a point from Leal with no warning or prior offense and that changes the entire complexion of this fight.

Leal seems to know it and comes out gunning for a finish, swinging haymakers before changing levels for a takedown. They break and Sy gets back to his jab before Leal gets in deep on a single once again. Sy does a good job working to the cage to stay on his feet and Leal is going to need to make something happen in the final minute here.

With 30 seconds left Leal throws a wheel kick that lands on the shoulder of Sy as Sy returns fire with a wheel kick of his own.  The round ends and it’s going to be quite interesting to see how the judges score it.

Sadibou Sy finally gets over the hump and is heading to the PFL Championship!