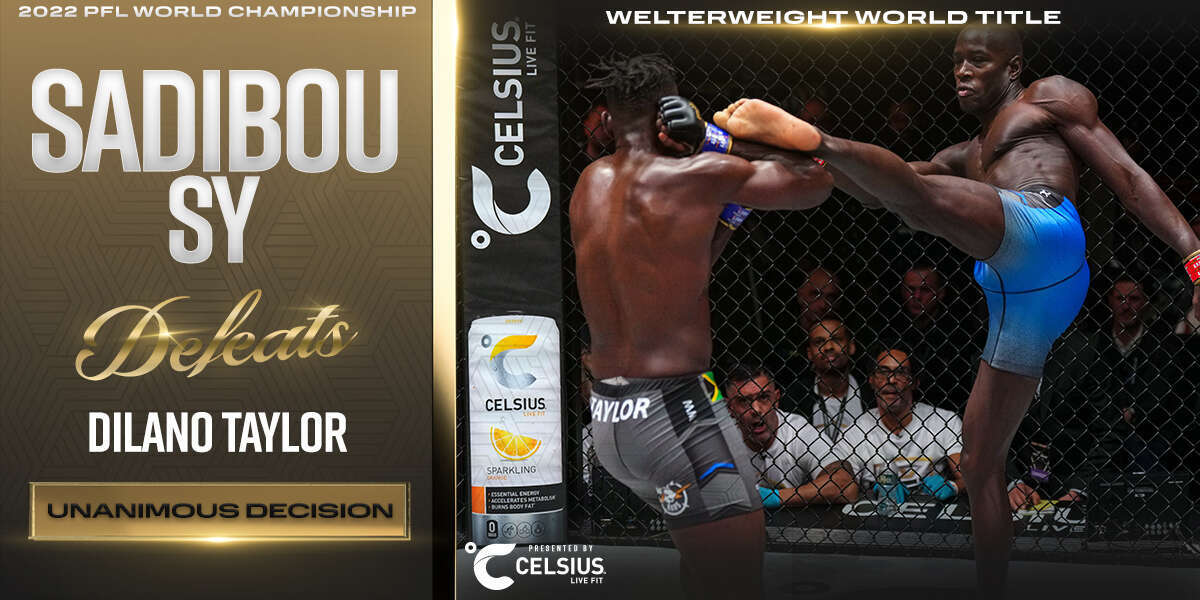 The richest night in MMA continues as rising star and #5 seed Dilano Taylor (10-2) looks to make good on a borderline unbelievable underdog story, going from Challenger Series winner to Regular Season alternate to competing for a chance to win a 2022 PFL World Championship and $1 Million.  Across from Taylor stands 4x Kickboxing and Muay Thai champion and #2 seed Sadibou Sy (12-6-2), who looks to finally capture PFL gold and $1 million after 3 consecutive PFL Semi-Final appearances. The stakes are high as Taylor looks to become the youngest PFL World Champion in history and Sy looks to finally get over the hump!

Both men seem a bit timid to start the fight with each respecting the other’s power and trying to find the range.  Sy lands a heavy roundhouse kick to the body to do the first real damage of the fight.  Sy fires a head kick which Taylor blocks and counters with a left hook in what has been a highly technical striking affair through 90 seconds.

Sy lands a heavy front kick but he isn’t chaining together his attacks, opting instead for heavy one and done shots.  Eventually, Taylor will have to take a risk as the Sy contingent in the crowd makes themselves heard.

Halfway through the land Taylor partially lands a heavy right hand but can’t connect cleanly as he’s forced to retreat out of the dangerous kick range of Sy.  Taylor fires a heavy head kick of his own but Sy is able to evade without much trouble.

Sy fires an inside low kick, one of his best weapons, and lands clean as Taylor struggles to find his range and Sy moves laterally along the SmartCage to get out of danger.

The round will come to an end with Taylor applying some pressure but he’ll need to up the output to stay in this fight.

The “Sadibou” chants continue as we begin our 2nd stanza.  Taylor seems to be making a concerted effort to up the output and aggression, a good adjustment between rounds but he’ll need to stay with it.

Sy lands another heavy body roundhouse and is out of the way before Taylor can fire back a kick of his own, a common theme early in this one.  Once again Taylor attempts to pressure along the SmartCage but Sy has excellent footwork and lateral movement, constantly staying just out of harm's way.

Sy fires another kick and this time Taylor is able to catch it and land a left hook as it seems Taylor is beginning to settle in and find his range, landing a nice hook before Sy can reset.

Taylor switches the game plan and changes levels, digging for a single leg as Sy uses the whizzer to stay on his feet and eventually break off the SmartCage.  Taylor is reluctant to break the clinch however, using it to land some short punches and a nice right hand over the top on the break.

Sy continues to find success with the body roundhouse and seems a step ahead of Taylor in the striking exchanges at range.  Sy goes back to the inside low kick and is in and out before the counter from Taylor gets home.

With 30 seconds remaining, the crowd begins to voice their displeasure at the pace, and as if to answer the New York crowd Taylor connects with a nice high kick to end the round.

Taylor opens round 3 looking for another takedown and gets in fairly deep on a single leg before Sy is able to break and reset.

There is still a lot of feeling out here as Sy lands that same body roundhouse again before landing a heavy outside leg kick.  The crowd may not love it, but Sy is doing an excellent job forcing Taylor to fight his fight and play to his strengths.

Taylor lands a nice front kick of his own before using a level change feint to land a nice short hook, but he cannot capitalize and we’re back to range before Taylor initiates the clinch once again.

Both men trade knees in the clinch in the center of the SmartCage before breaking and returning to range where Sy has dictated the exchanges and that is how the round will end.

For the 1st time tonight, we go to the Championship rounds.

Taylor once again comes out with some urgency, firing and landing his jab a few times while walking Sy down.  Interestingly, Sy decides to shoot now but Taylor is able to stuff him and they again wind up in the clinch in open space.

Taylor just misses a big straight right but follows it up with a nice left hook to the body before landing 2 nice right hands and staying in the pocket.  Taylor seems to be accepting that he may have to take one to give one here.

Sy is impressively comfortable off his back foot with his back to the fence, constantly moving laterally and not giving Taylor any free shots at a stationary target.  The fighters clinch again and Taylor lands a nice knee to the body halfway through the round.

Taylor overcommits on a big right and Sy answers with a left hook before they clinch again.  One would imagine Taylor is starting to feel the pressure at this point.

The fighters exchange low kicks before it’s back to cat and mouse, as Taylor lands a nice body roundhouse of his own.  They briefly clinch but the ref decides there is not enough action and separates the fighters as the round winds down.  Taylor responds well to the 10 second clapper, landing a nice flurry of punches to close out what was likely his best round so far.

Our final round is underway and it remains to be seen if either fighter will sell out for a finish.  Sy is staying busy with kicks but isn’t landing much as Taylor hunts for an opening to land something fight altering.

Sy lands the same body roundhouse he has had so much success with throughout the fight.  They trade punches and Sy shoots for a takedown but Taylor once again stuffs his attempt and breaks.

Taylor is looking to land his left hook off the roundhouse of Sy but seems just a half step slow as the ref calls for more action between the fighters.  Taylor lands a stiff jab but fails to follow it up as the chess match continues with only 2 minutes remaining.

Taylor is finally having some success with his jab but it might be too little too late at this point as Sy is likely ahead on the cards.

With 1 minute remaining, Taylor needs to empty the tank but he just can’t seem to nail Sy down or answer his lateral movement.

With 20 seconds to go Sy again lands the roundhouse kick to the body and the fight will end with both fighters at range looking for a big shot.

Sadibou Sy finally gets over the hump to win PFL Welterweight gold and $1 million!