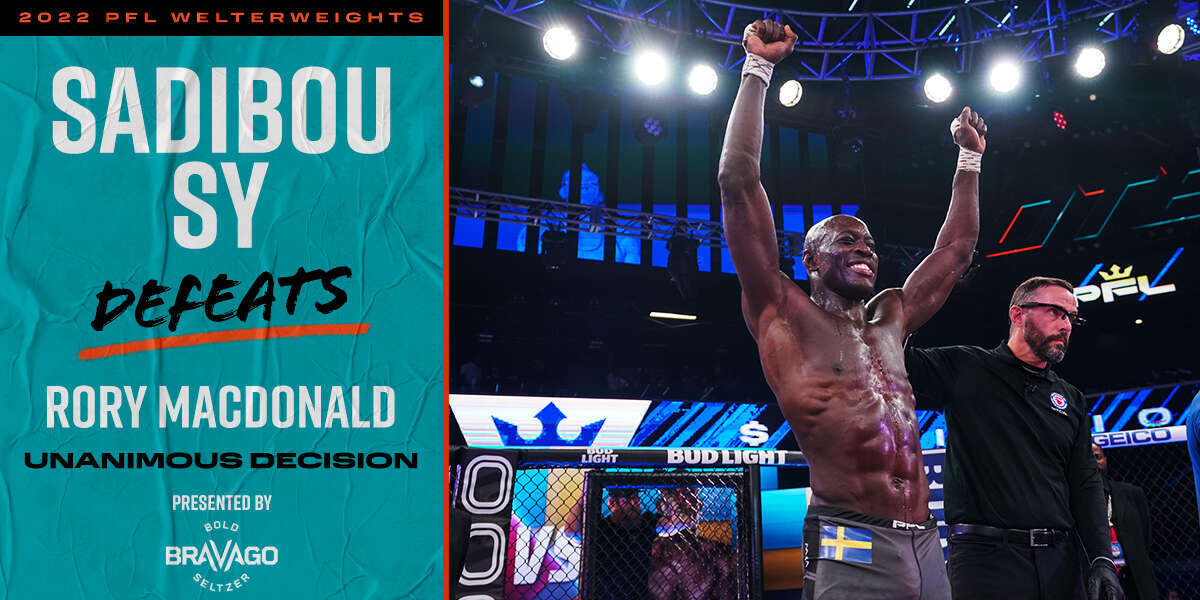 In our co-main event of the evening, “The Red King” Rory MacDonald (23-8-1) looks to clinch the 1st overall seed in the Welterweight Playoffs following a stellar 1st round submission victory in his opening bout of the season. Meanwhile, “The Swedish Denzel” Sadibou Sy (10-6-2) also enters this bout following a win in his Regular Season opener, defeating Nikolai Aleksakhin via split decision to earn himself 3 points.

A former UFC title challenger and Bellator champion, MacDonald looks to build on last year’s PFL Playoff Semifinals appearance by going all the way this time and winning a PFL World Championship.  In his quest to do so, MacDonald changed camps this offseason, moving to Austin to train with John Danaher and Tim Kennedy.  That change looks to have paid off as MacDonald submitted Brett Cooper in only 2:23 in his Regular Season opener.

The path to victory for Sy is clear in this one: avoid the takedowns of The Red King and turn this into a kickboxing bout.  A former Swedish kickboxer and Muay Thai national champion, Sy is looking to make his 4th straight appearance in the PFL Playoffs and will look to do so using one of the nastiest low kicks in MMA. Possessing the fastest KO in the history of the division at just 17 seconds, Sy certainly has the firepower to finish this fight and clinch himself a Playoff spot.

Rory takes the center of the SmartCage and changes levels early, getting in deep on a single leg as Sy attempts to fight him off and create some space.

Rory switches to a double leg but can’t finish it as Sy uses the whizzer to keep himself upright for now, but Rory isn’t done yet as he’s still changing levels and attacking takedowns, clearly believing he has a sizeable advantage should the fight hit the mat.

They separate and Sy throws and barely misses a big high kick before Rory clinches again and starts working for a takedown while landing some nice knees to the body and giving Sy something to think about.  Interestingly, Rory is cut under his eye, perhaps from a clash of heads in the clinch.

The Red King briefly pulls guard in an attempt to get the fight to the mat by any means necessary but Sy is able to get back to his feet quickly as both men continue to jockey for position in the clinch.

The referee calls for more action and Rory fires a knee that lands below the belt. We’ll have a brief pause in the action while Sy recovers.

We restart the action with just under 2 minutes remaining in the opening stanza.  Sy lands a nice left cross as Rory looks to close distance and initiate more grappling exchanges.

Sy fires his best weapon, the low kick and connects before Rory again shoots on the single but cannot complete the takedown.  Sy is able to reverse position and break, getting back to kickboxing range.

Rory lands a nice body kick before punching his way into another clinch exchange.  Rory is now bleeding fairly significantly from that cut under the right eye.

Bizarrely, Sy walks away from Rory and puts his hand up after hearing the 10 second clapper and there’s some confusion as The Red King looks displeased. It appears a short uppercut from Sy in the clinch is what opened the cut.

Sy has impressed with his takedown defense so far, we’ll see what adjustments Rory makes as we enter the 2nd round.

Rory again uses a right hand to close distance and engage in the clinch as the referee gives the fighters instructions along the fence.  Rory lands a nice knee to the body as Sy is again able to reverse position, but Rory holds on to the bodylock and won’t let Sy off the hook easy here.

Rory is grinding on Sy and making this fight ugly as the referee calls for more action once more.  Rory attempts the outside trip but Sy keeps his base strong and is unfazed as they now break and Sy fires a high kick that is blocked and a body kick that lands.

Rory again gets in deep on a high single and attempts to run the pipe but can’t finish, this has to be demoralizing for The Red King as he struggles to implement his gameplan with the 2nd round winding down.

The 10 second clapper hits and Rory fires some short knees to the body in the clinch. Very difficult fight to score so far.

The final round begins and Rory is again pressing the action and stalking Sy, landing a big overhand right that briefly staggers Sy before dropping levels again and attacking the single leg in open space this time.

Once again, Sy is able to fight off the takedown attempt and we’re back to jockeying for dominant position in the clinch along the SmartCage.

They break and Sy lands a nice roundhouse kick to the body before Rory again closes distance and clinches, landing a knee to the body of Sy in the process.

Sy needs to be careful here as Rory has the back for the first time tonight, attempting to drag Sy to the mat as Sy fights the hands. Sy is able to stay on his feet but Rory lands a nice knee to the head before Sy is able to turn his hips into Rory and lessen the danger a bit.

Rory continues to control Sy in the clinch and land that body knee, and in a shocking turn of events Sy lands a takedown of his own! He lands in top half guard but isn’t able to keep it for long as Rory secures double underhooks and pops right back to his feet.

Rory lands another knee to the groin and we’ll once again pause for a moment for Sy to recover. The referee gives Rory a stern warning and another foul will result in a point deduction which could absolutely decide such a close fight.

The action restarts and again Rory looks to clinch as Sy lands a nice high kick with a jab behind it with just over a minute remaining. Rory again punches his way into the clinch before grabbing the Thai clinch and landing a big body knee.  Sy is throwing kicks all the way to the bitter end as the fight concludes.