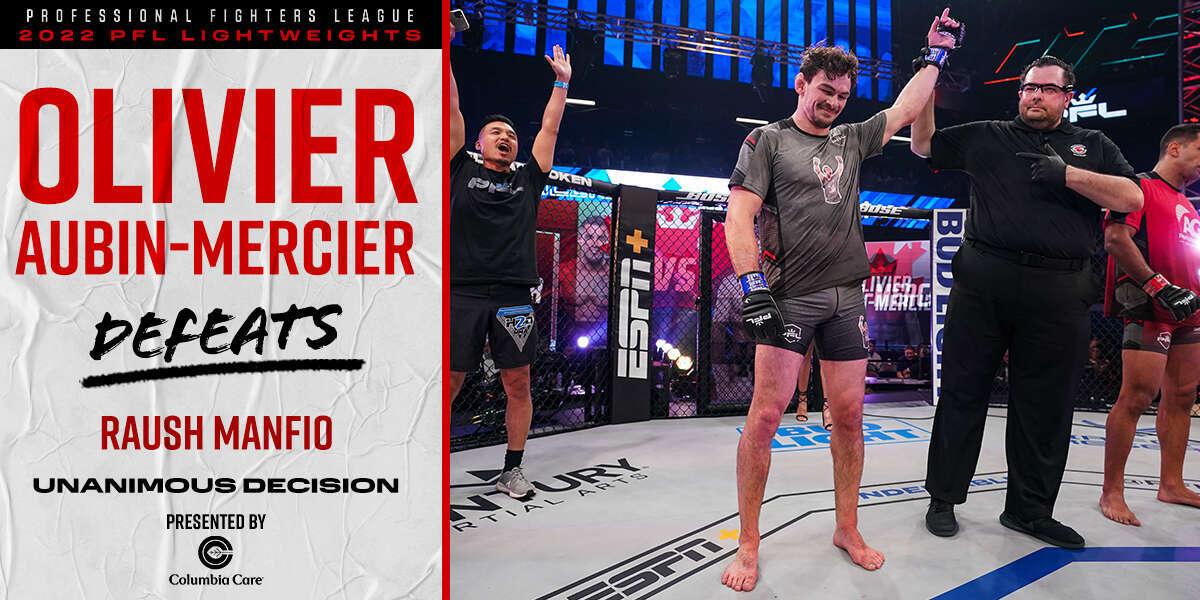 In a bout that feels like it could very easily have been for the PFL Lightweight World Championship, the War Horse and reigning champ Raush Manfio (16-3) takes on “The Canadian Gangster” Olivier Aubin-Mercier (14-5).  Both fighters carry win streaks into this bout and a playoff berth is on the line! According to Fight Matrix, this is a clash of 2 top twenty lightweights in the world with Manfio ranked #10 and OAM ranked #17.

2021 was an eventful year for Manfio who completed one of the greatest underdog runs MMA has ever seen, going 4-0 and winning himself a PFL World Championship and 1 million dollars.  All of this after 3 years away from professional competition and, ironically enough, only entering the tournament as an alternate due to an injury to Aubin-Mercier.  Manfio is now riding a 5 fight win streak and remarkably has been the betting underdog in all 5, just as he is tonight at +125.  A $100 bettor would have netted $865 in profit betting Manfio in each of his fights in the PFL. Manfio currently has 4 points following a 3rd round finish of Don Madge and can clinch a playoff spot with a finish.

A UFC veteran who went 7-5 in his time with the promotion, OAM now carries a 3-fight win streak into his bout with the champ after picking up 3 decision victories in his first 3 PFL bouts.  A decorated grappler, OAM has finished 8 of his 14 career wins via submission and holds a black belt in judo as well as a brown belt in jiu-jitsu.  This bout should be a fun stylistic clash between a well-credentialed grappler in OAM and a devastating striker in Manfio. OAM currently has 3 points after his decision over Natan Schulte to open the season and he too can clinch a playoff spot with a finish.

The bell rings and we’re off! Manfio opens with a push kick to the body as both fighters try to establish range and find some openings.  OAM is doing a lot of hand fighting early, trying to tie up the lead hand of Manfio and perhaps open up the pull counter or level change.

90 seconds in and the output is low so far as both fighters seem to respect the weapons of their opponent.  Manfio again throws that push kick and lands, OAM attempts a roundhouse but Manfio beautifully circles out and fires back the check hook to keep him honest.

OAM is wisely starting to mix in some level changes and feints to keep Manfio confused and guessing what comes next.  After some more feeling out OAM lands a nice lead hook, his most effective strike of the fight so far.

At 1:10 remaining OAM lands a gnarly liver kick that is easily the most damaging strike landed by either fighter so far.  With a playoff spot on the line and either fighter clinching with a win, both fighters have been very risk-averse in the opening stanza. Manfio fires a low kick that lands and the fighters continue to circle and look for openings in a low-volume round.

The oddsmakers seem to think OAM won the first and one would have to assume that eventually Manfio will up the output and sense some urgency.  On that note, Manfio loads up a big right hand that whiffs but he seems to be moving forward a bit more in this round.

Manfio almost seems reminiscent of Yoel Romero, just waiting patiently for his spot to open and then exploding but he has yet to put any significant offense together.

Once again OAM lands that roundhouse to the liver and Manfio is clearly having trouble against the southpaw. Additionally, OAM is doing a fantastic job of negating Manfio’s lead hand with footwork and hand fighting.

It feels as if Manfio is waiting for the perfect counter but eventually he’s going to have to go first.  The live odds grow wider and wider as OAM has now swelled all the way to a 14-1 favorite and the crowd voices their displeasure with the lack of volume.

The round comes to a close and it’s a repeat of round 1, very low output from both fighters with the edge to OAM based on 1 or 2 damaging strikes.  Manfio must go into the final round assuming he needs a finish to clinch a playoff berth and defend his title.

As we begin the final round one would hope Manfio ups the output as he again lands that push kick to the body but doesn’t follow it up.

Can Manfio pull off a second straight 3rd round comeback? We know he has the power but he’s going to have to make something happen here as OAM leads the dance again.

Interestingly, OAM has upped the volume more than Manfio has at this point almost 2 minutes into the round.  OAM again lands that roundhouse to the body which has easily been the most effective strike for either fighter tonight.

Halfway through the round OAM initiates a grappling exchange but is unable to make anything happen.  With 2 minutes remaining Manfio has yet to show a different gameplan or pick up the pace, perhaps he’s content to bank on his 4 points being enough to make the playoffs, but in that case he will have to wait for next week’s bout between Anthony Pettis and Stevie Ray.

OAM continues to grind on Manfio against the cage, wisely negating the dynamite Manfio has in his hands.  Very low volume fight and a likely 30-27 for OAM who will clinch a playoff spot.

OAM clinches a playoff spot with his 4th straight PFL victory, while Raush Manfio will have to wait for the result of Anthony Pettis and Stevie Ray’s bout to see if his 4 points will be enough.