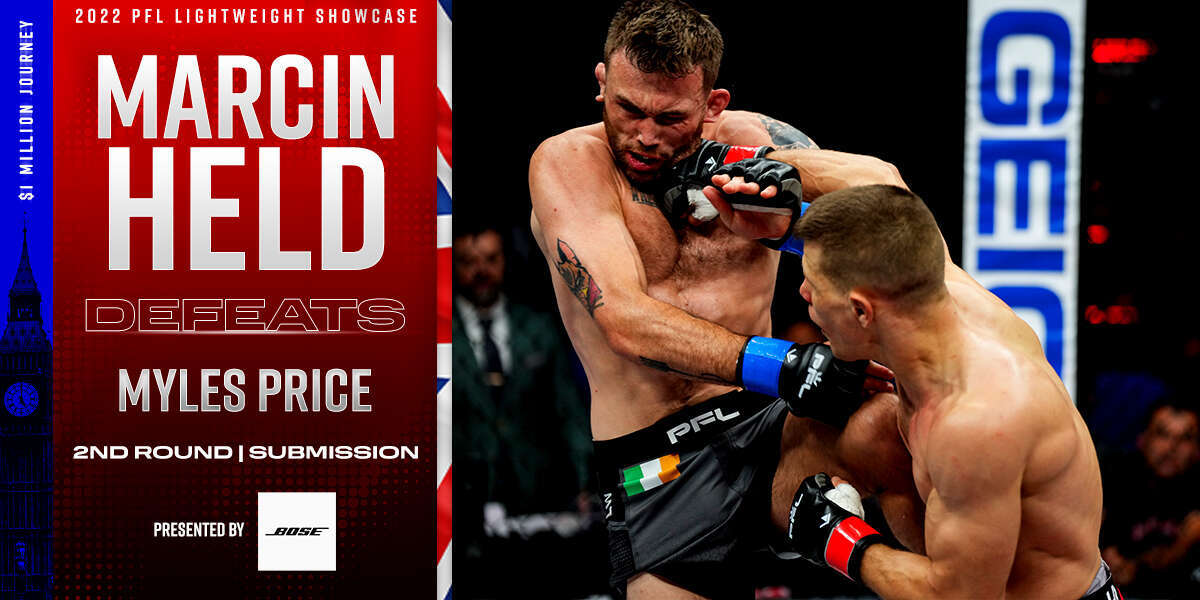 The final bout of PFL’s London tenure will see Marcin Held (27-9) take on Myles Price (11-9) in a Lightweight Showcase.  Two well decorated Europeans who have competed at the highest level all over the world, Held and Price are both seeking their 1st wins of the year following disappointing regular seasons for both men. Despite the rough form of late, Price has acknowledged his struggles and believes many of them are mental in nature and believes he is still improving following a 3 year layoff.  Held made an impressive PFL debut, upsetting former PFL Champion Natan Schulte last year before dropping his next 2 bouts under the PFL banner.

For the final time tonight the opening bell rings and we’re underway in the SmartCage.  Held seems to be the aggressor early, walking Prive down and landing some big shots.

Price throws a body kick and Held counters with a big hook, sitting Price down quickly as Held dives into side control and begins attacking submissions.  Price gets back to his feet and immediately eats a big knee from Held on the break.

Held is doing a good job using short uppercuts in the clinch here as Price just keeps coming forward despite getting tagged on the entry. They break and Price just misses a high kick.  Held is doing a fantastic job of moving laterally and being tough to pin down here as Held cuts off the cage and shoots in on a double leg.

Price however is able to pummel for an underhook and stave off the takedown attempt for now. Price briefly reverses position before Held is right back to digging for a double leg but this time Price is able to break and land a nice left hand as the fighters separate.

They exchange blows in a bit of a sloppy exchange before Held secures the bodylock and rides out the final seconds of the round against the SmartCage.

Price comes out more aggressive to begin the 2nd round, blitzing and landing a few short hooks before Held answers with a big overhand and shoots a double leg.  Price attacks a submission of his own this time, briefly securing a high elbow guillotine but Held defends expertly, quickly negating the danger and again winding up in side control threatening his own submissions.

Held jumps the arm in guillotine but Price defends beautifully, getting a butterfly hook in and creating enough space for him to slip his head out of Held’s grasp.

Price escapes once more but this time Held jumps the guillotine and it’s significantly tighter and there’s the tap!

Marcin Held gets the Guillotine Choke in the 2nd round!#PFLPlayoffs pic.twitter.com/XgrF1I5qwt

Marcin Held snaps a 2 fight skid in a Lightweight Showcase bout to close out PFL London.