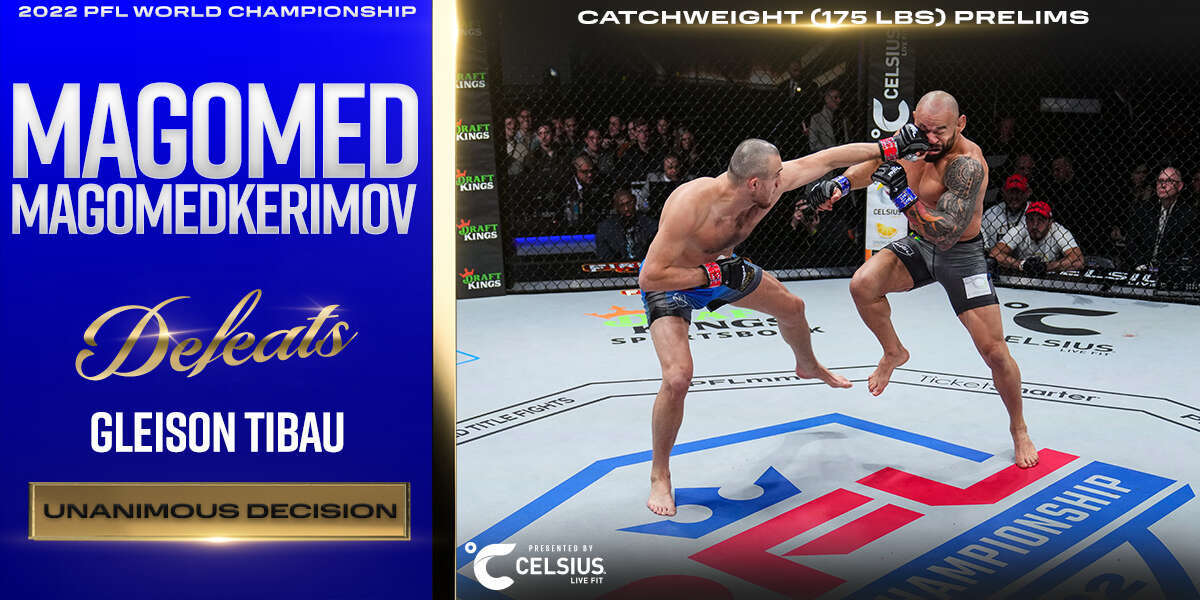 Both fighters are trying to find the range early with Magomed having some success with his jab and eventually landing a nice right hand.

Magomed is using his length advantage well, firing his jab and using straight punches to set up some big hooks.  Tibau meanwhile has struggled to get inside and mount any offense of his own.

About halfway through the round, Tibau shoots hard but Magomed is wise to it, getting low and heavy on his hips and shoving Tibau aside before landing a nice right hand and feinting a level change of his own.

It’s been mostly Magomed so far but Tibau finally lands a nice little uppercut hook combo with about 90 seconds remaining in the round.  Magomed decides to shoot for a single leg but Tibau is able to evade and reset.

Magomed is doing a fantastic job using level change feints to set up punches over the top and Tibau has struggled to muster an answer so far.

The 10 second clapper hits and Magomed explodes for a last flurry of action as the round closes.  We’ll see our first 2nd round of the night.

Tibau wastes no time trying to get the fight to the mat to begin round 2, briefly securing a takedown before Magomed is able to scramble back to his feet and into a dominant position in the clinch along the cage.

Tibau seems to think his best chance against a long range opponent is to grapple, and he may very well be right as he continues to struggle in striking exchanges.

Magomed lands a heavy jab and then goes to the body before firing a big head kick that just misses the target.  Tibau is starting to bite heavy on every feint as it feels Magomed is just waiting for the perfect opening to unleash something big.

Tibau tries to shoot again but it seems Magomed has his timing down now as he’s met with a knee and a quick flurry of punches to ward him off.  Magomed again fires a big front kick up the middle but with 30 seconds to go Tibau lands a big right and seems to stun Magomed!

Magomed quickly recovers however and will finish out the round applying pressure and on the front foot.

How have you scored it through 2 rounds?

Once again Tibau opens the round with a big takedown attempt and again he briefly secures it before losing position in the ensuing scramble and winding up with his back to the SmartCage.

Tibau lands a nice knee in the clinch which Magomed returns before deciding to separate and retreat to the center of the SmartCage.  Magomed continues to use a lot of front foot feints to set up his hands and he’s still landing, though he seems to be slowing down a bit.

Magomed attacks a single leg takedown but can’t secure it.  Both fighters appear content to take a little break in the action before Magomed turns the pressure back up.  With 90 seconds remaining in the fight, they clinch along the SmartCage and Magomed works the body with some short punches followed by a nice knee.

Magomed shoots another takedown but Tibau sprawls hard as we reach the 30 seconds remaining mark.  Tibau takes another shot and Magomed cracks him, landing another big front kick to punctuate what should be a clear decision victory.