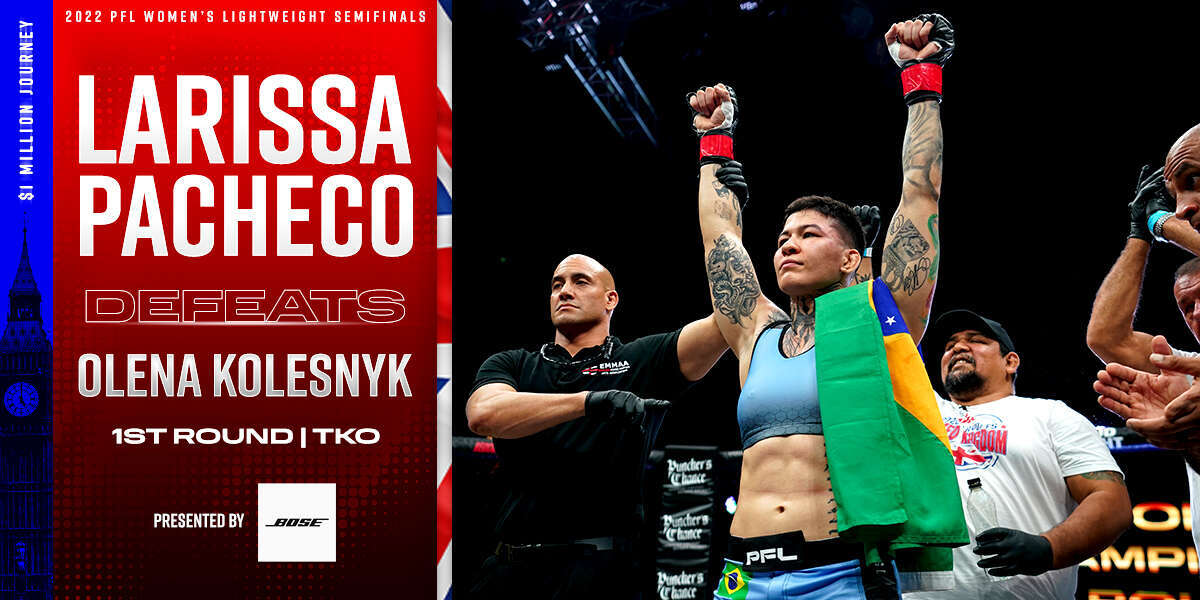 In our 1st Womens Lightweight Playoff bout, #1 seed Larissa Pacheco (17-4) looks to keep her dominant run going against #4 seed Olena Kolesnyk (7-4).  Pacheco has not lost a fight since losing the 2019 PFL Championship bout to 2x reigning world champ Kayla Harrison, riding an incredible streak of 4 consecutive 1st round knockouts in that span. Kolesnyk meanwhile was able to right the ship this season, winning both of her regular season bouts to secure the #4 seed after being forced to flee her home country of Ukraine due to the Russian invasion. Kolesnyk hopes to use the 1 million dollar Championship prize to get her mother and sister out of Ukraine, where her 58 year old father is currently fighting in the army. The stakes couldn’t be higher as these 2 talented women meet to determine who will advance to the 2022 PFL Championship!

Both fighters rush the center of the SmartCage to begin the bout as Pacheho lands a heavy low kick and Olena returns with a nice teep kick to the body.

Pacheco seems a bit more patient than she has in her previous matchups this year, looking for entries rather than bull rushing as she throws a high kick that gets blocked but then lands a BIG overhand right that wobbles Olena!

Pacheco rushes in and Olena is able to slip and land a nice check hook but Pacheho shrugs it off and keeps the pressure on.  Olena again goes to that teep kick to create space and lands another left hook.

Now Pacheco lands big! A big left hook gets around Olena’s guard and Olena is hurt badly! Pacheco keeps the pressure on, unloading a barrage of punches as Olena collapses to the mat where Pacheho pours on the damage and the referee is forced to stop the fight.

Larissa Pacheco is back in the PFL Championship!

Larissa Pacheco extends her streak to 5 straight 1st round knockouts, stopping Olena Kolesnyk with a barrage of punches to advance to the PFL Championship!