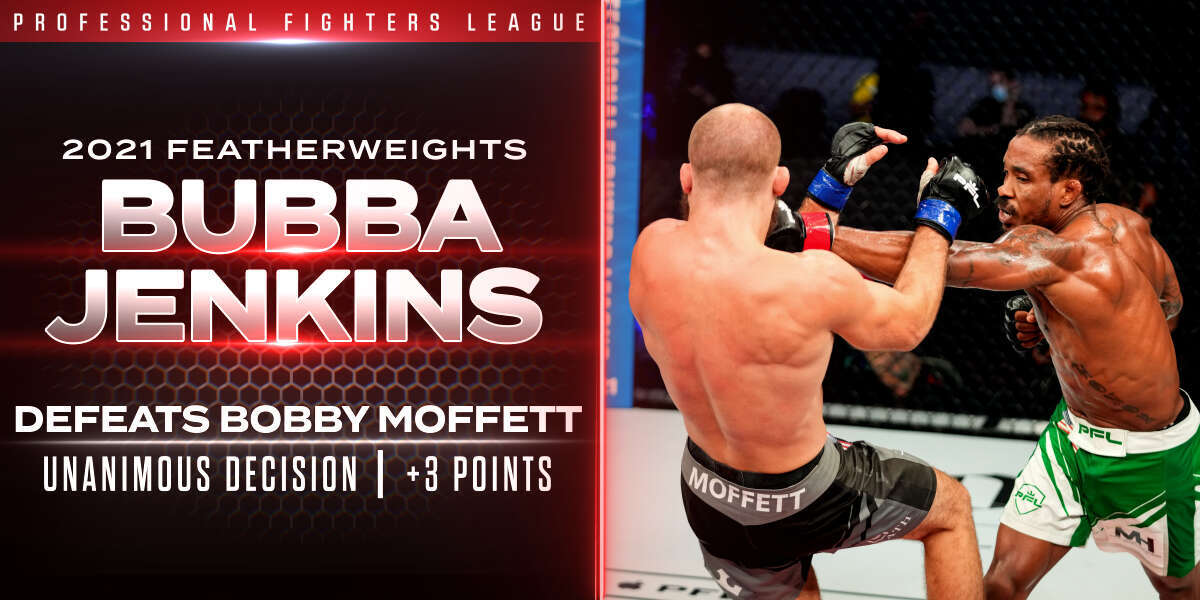 Bubba Jenkins surprised many during his PFL 1, 2021 matchup against Lance Palmer, dominating the two-time PFL Featherweight king en route to a unanimous-decision victory.

Thursday night at PFL 4, 2021, Jenkins looked to keep the momentum rolling against slick, experienced grappler Bobby Moffett. Moffett entered the bout on short notice after Jenkins’ original opponent, Anthony Dizy, pulled out of the fight with an injury.

That didn’t seem to matter.

Jenkins opens up quickly, immediately putting Moffett on his heels and securing a takedown. He goes to work looking for Moffett’s back, while Moffett counters with a ninja choke attempt. Jenkins creates space again and gets closer to taking Moffett’s back, but Moffett again defends. They return to their feet and Jenkins shoots once more. Moffett again turns to the ninja choke, and Jenkins disengages.

They feel each other out on the feet a bit, Jenkins landing a strong left hand and Moffett feeling things out with leg kicks. Some showmanship ensues, as Jenkins taunts Moffett after a combination, only to have Moffett respond with a laugh and some hands of his own. The two close the round on the feet, both men looking comfortable and confident in the process.

Jenkins flies out of the corner (literally) narrowly missing with a knee, which he turns into a takedown. Again, Moffett looks for the choke to defend, and Jenkins pursues the back. Moffett attempts to bait Jenkins into a roll, but he doesn’t take it, content to land shots and work for position instead. Moffett scrambles to his feet, showing some of that slick grappling that’s become his trademark throughout his career.

They return to the standing position, and Moffett presses Jenkins against the cage. While working for the takedown, Jenkins searches for the front choke, but it isn’t there. They battle for position, and Jenkins wins it, separating and landing a hard shot on the break. Moffett teases a question-mark kick, but Jenkins wades through it and gets a quick takedown.

Working from Moffett’s full guard, Jenkins lands some short shots to the body while Moffett tries to set up a choke. Not happening. Jenkins shrugs it off and again lands some shots from top position. Moffett briefly threatens a kimura, but it’s not there and Jenkins punishes him with some strong ground-and-pound.

The round ends with Jenkins on top, raining down shots.

This time, Moffett charges out of the corner and takes the center of the cage. It appears he senses he’s down, and he’s looking to push the pace in search of a finish. Jenkins shuts that down with a quick shot, pushing Moffett against the cage.

Jenkins gets the takedown, but Moffett explodes to his feet, only to be taken down once again. This time, Moffett gets the ninja choke, and it looks tight. Jenkins explodes, but Moffett hangs on briefly, causing a scare before Jenkins finally slips his head free. Jenkins escapes briefly, but Moffett is all over his back in search of another choke. Again, Jenkins escapes, and they return to slug it out on the feet.

Moffett pushes forward, and Jenkins looks a bit fatigued as his opponent rips shots to the body. Jenkins shoots a lazy takedown attempt that Moffett shakes off with ease. More punches inside from Moffett score, but he needs a finish, and the clock is ticking.

Jenkins fires away with a crisp combo, but Moffett eats it and returns fire. He swarms, finishing with a head kick that just misses. Jenkins shoots to close the fight, and the bell rings. Moffett had the momentum and likely that third round, but we go to the judges’ scorecard to determine if it was enough.

As expected, Jenkins took the fight’s first two rounds, and that was enough to earn him three points and a trip to the 2021 PFL Playoffs. To celebrate, Jenkins imitated Baltimore Ravens legends Ray Lewis’ famous dance, a fun nod to the Hall of Fame linebacker sitting cageside.