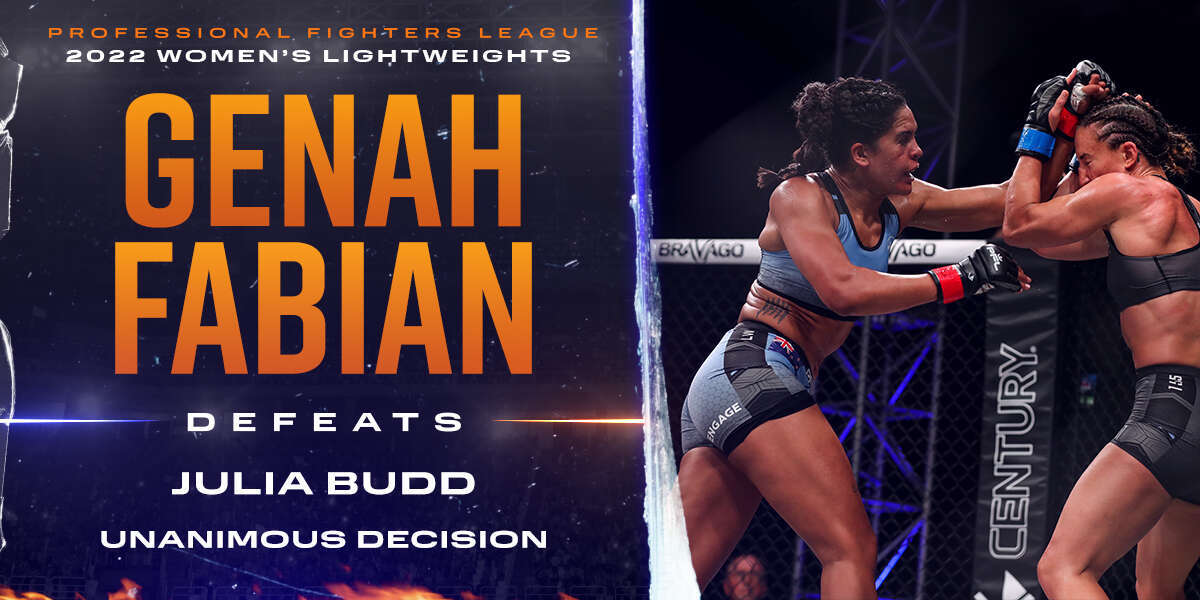 Fabian will not be eligible for points tonight as she missed the lightweight limit and as such will start the season with a -1 in the standings.  Regardless, Fabian is looking to prove she is a worthy contender and told the media at the pre-fight press conference her ultimate goal is to defeat 2x champion Kayla Harrison in a rematch and capture PFL gold and the million-dollar prize.

Budd, one of the most accomplished women in the sport, looks to put a stamp on her first PFL Regular Season bout after a win in a showcase bout last year over Kaitlin Young.  Many are considering Budd the odds on favorite to challenge Kayla Harrison for the championship and she will walk away from this fight with 3 points regardless because of Fabian’s weight miss.  However, Budd is still eligible for bonus points for a finish and would certainly like to plant herself atop the women’s lightweight standings.  With her only career losses coming to Cris Cyborg, Ronda Rousey, and Amanda Nunes, Budd has as good a chance of anyone on the roster to make a title run and demonstrate that there are levels to the fight game.

The fight begins with a lot of hand fighting and searching for range as Julia Budd attempts to figure out how to get inside on the longer Fabian.

Fabian throws a few punches that Budd is able to slip or deflect with her guard before Budd catches a kick and instantly digs in a single leg attempt.  Budd drives Fabian into the cage and transitions to a high crotch but Fabian is able to get wide and attack an overhook to prevent Budd from finishing the takedown.

Budd is keeping relentless grappling pressure here but isn’t having a ton of success so far as Fabian defends excellently.

3 minutes into the round Budd is able to run the pipe and finally gets the fight to the mat and lands directly in half guard.  Budd traps the left arm of Fabian but is unable to get any damage off before Fabian frees her arm and is able to use the cage to get back to her feet.

They’re back in the clinch as Budd starts throwing some nice knees to the body to keep Fabian thinking about different attacks and possibly set up the level change.

After a few knees, Fabian is able to break and the fighters are back in the center of the Smartcage as the 10-second clapper hits.

Not much action to end the round and we’re on to the second, Budd didn’t do a ton of damage but she effectively prevented Fabian from getting off anything significant.

Keith Peterson confirms the fighters are ready and round 2 is a go. After some quick feeling out, Fabian lands a nice left and decides to initiate the clinch herself but gives up the position when she feels Budd starting to reverse the position.

Fabian throws another high kick but the output from both fighters is fairly low so far with just over 50 total strikes thrown 2 minutes into the 2nd round.  Budd seems content to wait for her opening to catch Fabian off balance and shoot but she’s going to have to get some offense off eventually.

Halfway through the round and Budd is able to parry most of Fabian’s strikes although a nice left straight got through clean as Fabian splits Budd’s guard right up the middle.

Fabian is doing very well fighting at kicking range where she seems to have a decent advantage as Budd is looking a little timid so far.

Budd attempts a front kick but Fabian is able to use her length to throw a jab off of it.

Fabian opens up with a nice combo with a minute remaining in the round, causing Budd to turtle up and then shoot a bit of a panic shot.  Fabian fights it off well and gets back to the cage as Budd digs for the high single.  The 10-second clapper goes off and they break with Fabian again pouring on some offense.

Great round for Fabian against the most talented opponent not named Kayla Harrison she has ever faced, it’s once again anyone’s fight going into the final round.

Budd seems to come out with a bit more urgency in this round but she’ll again need some volume and damage if she wants to win the fight.

One can’t help but wonder if Budd is fighting a bit conservatively knowing she has 3 points in the bag because of the weight miss.

Budd again changes levels and starts attacking the single leg, but Fabian is able to muscle her up over the hips and get herself out of danger. Budd continues throwing knees before again changing levels.  Halfway through the round and this much more closely resembles round 1 whereas even if Budd isn’t getting the fight to the mat she’s negating Fabian’s offense.

They break and Budd shoot but Fabian sprawls perfectly and starts throwing big shots from the top, Budd appears to be gassing a bit after all of the grappling exchanges.

Fabian is doing a good job keeping busy on top with small ground and pound as the 10-second clapper hits.  Budd throws up a triangle but it appears to be too little too late as the horn sounds and the fight ends.

Fabian most likely won 2 and 3 but will be ineligible for points in the standings due to the weight miss.

Genah Fabian gets the decision with a unanimous 29-28 but will still be at -1 in the standings because of the weight miss while Budd gets an automatic 3 points.