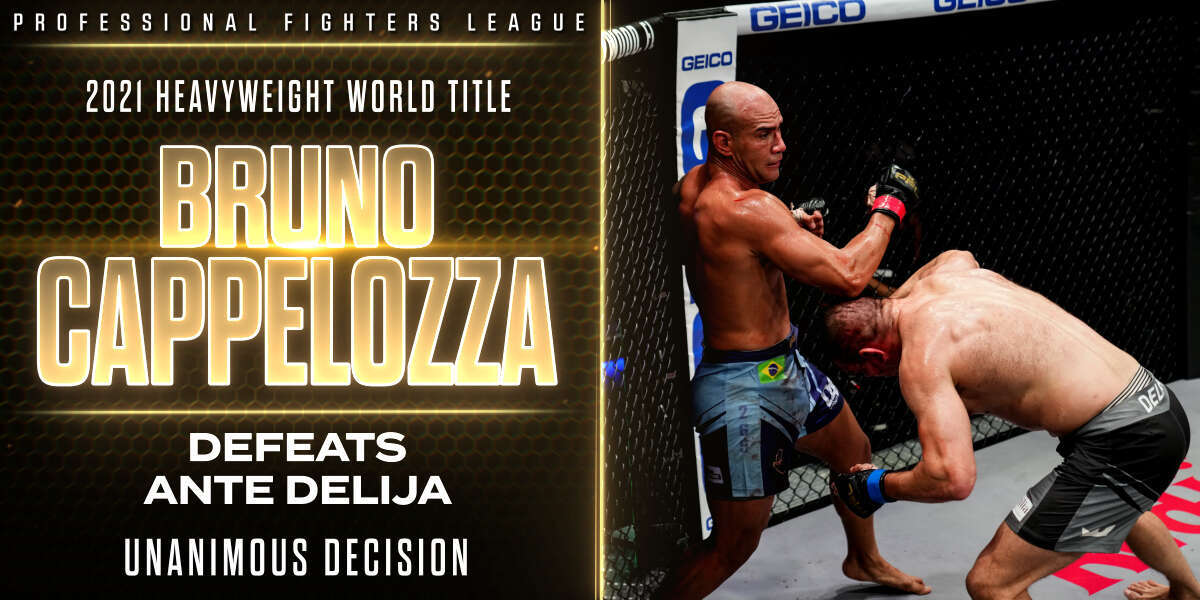 Bruno Cappelozza and Ante Delija kept the 2021 PFL World Championship fight card rolling Wednesday evening inside the Seminole Hard Rock Hotel & Casino, slugging it out for a shot at the PFL Heavyweight World Title and $1 million.

That alone provided plenty of intrigue for the matchup, but things got even juicier when digging into the details. Cappelozza previously defeated Delija via knockout back in May during the 2021 PFL Regular Season, making this a can’t-miss rematch with massive implications.

In the end, one man seized the opportunity and earned the biggest victory of his life. Here’s what happened:

Bruno Cappelozza enters the SmartCage! We are moments away from crowning another Millionaire and Heavyweight World Champion!#PFLChampionship pic.twitter.com/HupRAcL6em

Cappelozza is known to start quickly, but it’s Delija immediately shooting a takedown just moments into Round 1. Cappelozza immediately sprawls and lands a powerful left of his own, putting Delija on the mat.

From there, Cappelozza uncorks some vicious ground-and-pound, forcing Delija to tie up in an attempt to weather the storm. We’re just two minutes in here, and Cappelozza has already done serious damage to Delija’s face.

Now, Cappelozza looks to pass to a more dominant position, but Delija’s using the cage wisely for leverage in an attempt to get out of danger.

Cappelozza persists and advances to mount, where he searches for the arm-triangle choke. Delija shuts it down momentarily, but Cappelozza’s back at it. He releases the submission and opts for ground-and-pound, but Delija explodes back to his feet and powers forward with a series of hard punches of his own.

What a wild sequence to close the round! Just as it seemed Delija was done, he came roaring back with his best offense of the fight. Buckle up. Round 2 upcoming.

Delija shoots another takedown early in Round 2, and Cappelozza sprawls. Now, they’re pressed against the cage, with Cappelozza landing a knee before separating and cracking Delija with a quick left upstairs.

Another long-distance shot from Delija comes up empty, and they’re back in the clinch. Outside leg kick lands for Cappelozza as Delija marches forward. Now, Delija cracks Cappelozza with a right hand, clearly staggering Cappelozza.

He uses that momentum to score a takedown and uncorks some vicious ground-and-pound. What a turn of the tables! Cappelozza just hangs on, appearing to barely cling to consciousness here. Referee Keith Peterson was close to stopping that one, ladies and gentlemen, but Cappelozza survives.

A north-south choke attempt fails, and now Cappelozza returns the favor and reverses position. He’s going to work from Delija’s back, landing powerful shot after powerful shot. This is just absolute madness, and the crowd is loving it.

Cappelozza closes the round on Delija’s back.

Cappelozza’s out quickly in Round 3, putting Delija on his heels. He’s firing away with an absolutely ridiculous, video-game-like combo against the cage, and Delija eats it all before firing back with heavy leather of his own.

What are these dudes made of?!

Delija weathers yet another storm and pushes forward, looking for the takedown. He doesn’t get it, but they clinch against the cage, regrouping momentarily. They’re content to rest and pepper away with short shots here, and it’s tough to blame them.

With 1:45 left in the round, Peterson separates them, and they’re back at striking range. Delija plows forward and shoots from the outside but Cappelozza shrugs it off. Jab misses the mark from Cappelozza but he follows it with a nice body shot.

Strong right hand lands for Cappelozza as Delija once again enters with a sloppy shot. Cappelozza easily avoids the takedown and holds on until the end of the round.

Once again, Cappelozza comes out looking fresh and aggressive, and Delija shoots. Nothing there, and Cappelozza counters, dragging Delija to the mat and taking his back.

From there, he works some ground-and-pound, but Delija is able to avoid serious punishment and stand. They’re back against the cage, working from the clinch. They separate, but Delija shoots immediately, this time getting it done and planting Cappelozza on his back. He goes to work from half guard.

Delija maintains control here, but Cappelozza is working back to his feet, using the cage to help. He pops up, and the crowd acknowledges the effort. They separate with 30 seconds left in the round.

Another shot from Delija, and Cappelozza stuffs it. They end Round 4 clinching against the cage. We will see Round 5 … somehow.

Final round. Delija with a sloppy shot, and Cappelozza makes him pay with a sprawl and some strong punches. They go to work back against the cage.

Cappelozza dives on Delija’s legs and gets a big takedown, landing initially in half guard, but Delija quickly recovers full guard. Just as it seemed Cappelozza was content to work from there, he steps over and gets back to half guard, where he unleashes some ground-and-pound.

Delija scrambles to create space, but Cappelozza shuts it down and remains on top. Now Delija’s rolling once more, giving up his back in the process. Cappelozza takes the opportunity, but he’s too high, and Delija escapes out the back. They’re back on their feet, with Cappelozza pressuring Delija against the fence.

Another explosion from Cappelozza, and Deljia’s back on the mat. With 30 seconds to go, that could’ve sealed the deal for him.

Everyone thought that fight would rule –– but it somehow exceeded even our loftiest expectations.

That’s a heavyweight scrap worthy of a $1 million prize.

Coming into this fight, all 13 of Cappelozza’s career victories came via knockout.

Now, he adds a decision victory to the resume –– but something tells me he’ll be just OK with that. He takes home the unanimous decision, the PFL heavyweight title, and a cool $1 million check at the 2021 PFL World Championship.