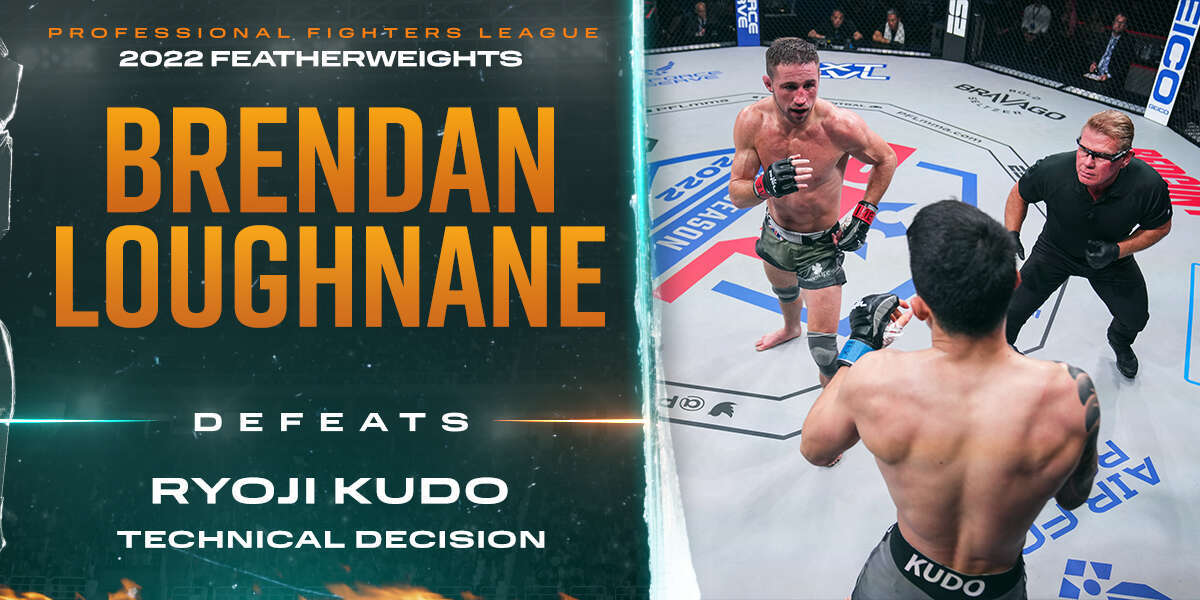 One of the breakout stars of the 2021 PFL season, playoff semifinalist and Manchester’s fighting son Brendan Loughnane (21-4) returns to action against Japanese newcomer Ryoji Kudo (10-2-1).

Loughnane went 2-1 last season with a highlight reel KO over Sheymon Moraes to start his campaign and a fight of the year contender with Tyler Diamond to secure his spot in the playoffs where he dropped a split decision to eventual champion Movlid Khaybulaev despite breaking his hand in the Diamond fight. When asked about his 2022 plans, Loughnane stated “all roads lead to Loughnane this season”.  He enters the 2022 season confident and ready to claim a championship and a million dollars.

Kudo, a martial arts lifer who began training at 5 years old, makes only his second ever appearance outside his native Japan.  Kudo has won 7 of his last 8 and has never been stopped.  He enters this fight looking to ingratiate himself with PFL fans by putting on a show and showcasing his skills in wrestling, judo, and karate, all of which he has trained since he was a child.

The bell rings and instantly Loughnane is looking to establish his jab and build his game from there, the true sign of a great MMA striker. The first minute of the fight is uneventful with Kudo trying to find a home for some kicks and Loughnane managing to get out of the way and not get touched early.

Kudo having a bit more success now but still not landing anything significant, Brendan will need to turn the output up eventually.

WOW! Just like that Kudo clips Loughnane with a left hook and sends him careening to the mat! Kudo swarms and starts firing away with ground and pound shots while Loughnane tries to recover.  Kudo fighting smart and not emptying the tank looking for a finish.

After about 30 seconds Loughnane appears to have his wits back about him and gets back to his feet but he still looks a bit shaky, throwing a naked low kick that almost gets countered in a big way.  Loughnane is dropping his hands on the exit and Kudo seems poised to take advantage.

With about 90 seconds left Loughnane is finally able to put together some offense and lands a few good shots of his own, but Kudo is mostly unfazed.

Kudo feints a level change and bullrushes with a hook that doesn’t connect and that will take us to the end of the round. Loughnane, a -1200 favorite, gets dropped and loses the round as a result.  He’ll need to clean up his exits and stop throwing naked low kicks to turn this one around.

Loughnane comes back more aggressive to start the 2nd, opening with an overhand right that grazes Kudo.  Loughnane keeps getting caught out of position and almost sprinting to get away, Kudo keeps throwing a hook as he does and Loughnane really needs to be careful with his footwork.

Kudo lands another big hook similar to the one that dropped Loughnane in the 1st round but Loughnane keeps coming forward. He’s still throwing that low kick naked and dropping his hands on the break, this may be the sloppiest we’ve seen Loughnane look in his PFL career.

2 minutes into the round Loughnane initiates the clinch and drives Kudo back into the cage, but Kudo is quickly able to break Loughnane’s grip and circle off.

Kudo shoots a takedown of his own but can’t secure it.  Loughnane appears to be having a little trouble with his right knee possibly.

Kudo is doing a great job of pressuring and coming forward and making Loughnane uncomfortable.  Loughnane again clinches and starts throwing knees.  Again, Loughnane backs straight up with his hands at his waist and gets clipped with a hook.

With 30 seconds to go Loughnane is attacking a bodylock and looking for takedowns but there isn’t much there, the fighters break and Loughnane clips Kudo! Kudo stumbles but recovers quickly, there’s a chance that final exchange was enough for Loughnane to steal the round, but he and his coaches should not bank on it.

Final round begins and let’s see how both fighters come out. Kudo shoots a telegraphed takedown early and Loughnane easily fights him off.  Loughnane initiates the clinch and takes Kudo’s back, quickly dragging him to the mat.

Just as quickly as Loughnane got it to the mat, Kudo gets back to his feet and starts working to break the clinch.  It takes a little time and positioning but with 3:30 to go Kudo breaks it and the fighters get back to the center of the Smartcage with Loughnane controlling.

Loughnane again takes Kudo’s back and slams him down hard but isn’t able to control or maintain position and again Kudo is right back to his feet.

Half a round remains and Loughnane needs to up the urgency.  Loughnane is on his bike a little as Kudo chases and we have an unintentional clash of heads as both men change levels simultaneously.

The ref brings the doctor in for a gnarly cut on the top of Kudo’s head.  The desk notes we have completed 2.5 rounds and if Kudo can’t continue we would go to a technical decision.

As the doctor tries to patch Kudo up, the ref decides it’s not getting taken care of and calls the fight, we’ll go to the judges’ scorecards for the aforementioned technical decision, a rarity in MMA.

Doctor comes in after accidental clash of heads. This one is getting stopped.#2022PFL2 pic.twitter.com/E2oMMImHQL

A strange ending to say the least! Brendan Loughnane goes ekes out a razor-close technical decision over Ryoji Kudo as a -1200 favorite to start his 2022 PFL campaign. Loughnane joins the other 3 featherweight winners with 3 points each at the top of the standings.