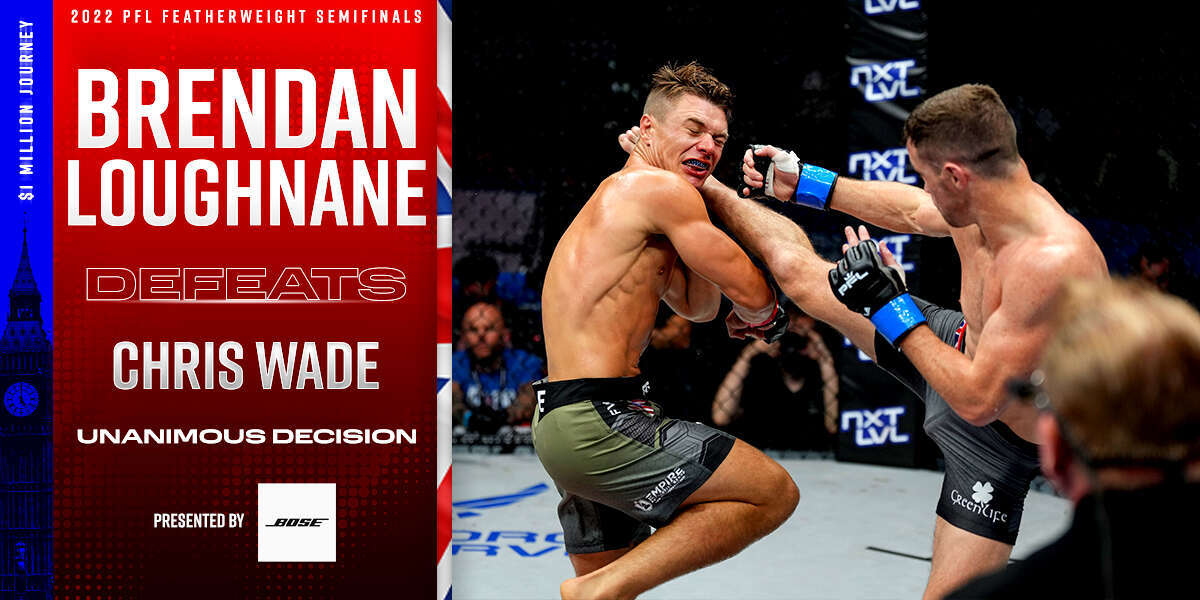 In our co-main event of the evening, bitter rivals Chris Wade (22-7) and Brendan Loughnane (23-4) clash in a #1 v. #4 seed semifinal matchup.  The only 4 time Semifinalist in PFL history, Long Island’s Wade looks to finally get over the hump this year and secure a PFL Championship and 1 million dollars. In order to do that, Wade will need to get past the UK’s own Loughnane, who Wade calls a “spoon fed Brit”. Loughnane and Wade have been nothing short of hostile in the build up to this fight in what may very well be the most heated rivalry in the PFL. Loughnane put the finishing touches on this training camp by working with heavyweight boxing champion Tyson Fury and Ricky Hatton and expects the full support of his hometown crowd in what should be a violent affair from bell to bell!

Shocking to no one there will be no touch of the gloves tonight as Wade rushes to control the center of the SmartCage and both fighters start probing with the jab to find the range.

Loughnane catches Wade with a nice counter hook on the entry but Wade is able to power into the clinch where he can use his wrestling advantage, but Loughnane isn’t going down easy, landing a big knee to the body before eating one himself and then breaking off the cage and returning to striking range.

It’s now Loughnane coming forward but Wade lands a big kick as Loughnane dips his head and Loughnane is hurt! Wade bulls over Loughnane and lands in the closed guard where he begins peppering ground and pound and working to stack and pass, but Loughnane is able to push off the hips and get back to his feet.

Loughnane lands a big left hand now and Wade looks a little wobbly! Loughnane doubles up and lands the left again before Wade gets in deep on a single leg.  Wade elevates the leg and Loughnane is warned not to grab the cage again as he manages to keep it on the feet by any means necessary.

Wade is working very hard for the takedown here and Loughnane is fighting him off well, forcing the break and landing a big right that Wade counters with a left! This fight is every bit as advertised so far!

Loughnane throws a spinning back kick and misses before deciding to shoot a takedown of his own as the round winds down.  Wade is able to fight it off and get back to the feet and that’s where a very back and forth round will end.

This round will open similarly as Wade rushes to the center of the SmartCage looking to establish control.  Loughnane however lands a pair of heavy body kicks before going to his jab.

Wade swings big with a high kick and Loughnane snaps his head back with a counter jab, Wade is going to need to find an answer for that jab soon as Loughnane is landing it at will.

Wade lands a nice hook before Loughnane comes back with a massive 1-2 and it appears that the strikes of Loughnane have been significantly more impactful early as Loughnane rips a heavy hook to the liver and Wade counters with a teep kick and a lead hook.

Again Loughnane lands a heavy jab which he is using very effectively to keep Wade at bay as the fighters both exchange low kicks.  Loughnane lands another headkick and he seems to be picking up momentum now.

However, Wade is still chopping with those low kicks and Loughnane’s lead leg appears to be compromised slightly as Wade lands big to the body and Loughnane returns with a 1-2.

Loughane times up Wade’s teep kick and lands a big right hand over the top! He seems to have Wade timed up now as again he counters a kick with a straight punch and he’s landing big and countering almost at will.

What a pace by both fighters as the round comes to an end.

Loughnane opens the 3rd by hyping up the crowd and both men still look fresh and quick in there as they exchange short punches in the pocket.  Wade lands a nice counter left hook and interestingly Loughnane has changed his stance, perhaps in response to some damage on that right leg.

Loughnane is starting to pull away in these in close striking exchanges landing heavy straight punches at will before countering with 2 big hooks that both land flush on the face of Wade!

Loughnane lands a spinning backfist as he’s starting to pick up some momentum here halfway through the round and Wade, perhaps starting to feel the urgency, attempts to engage the clinch but is quickly pushed away as they return to the center and Loughnane lands yet another massive counter right.

Wade punches his way into the clinch once more but with only 90 seconds remaining he may very well need a finish at this point.  They break and return to the center of the SmartCage with a minute remaining and Loughnane’s nose is now busted up badly.

Wade engages in the clinch again but Loughnane quickly reverses position, seemingly content to ride out the last few seconds of a competitive bout with an insane pace.

The bout ends and Loughnane is quickly playing to the crowd as we await the judges scorecards.

In perhaps the best performance of his career to date, Brendan Loughnane outclasses Chris Wade with his striking to clinch his first PFL Championship appearance!