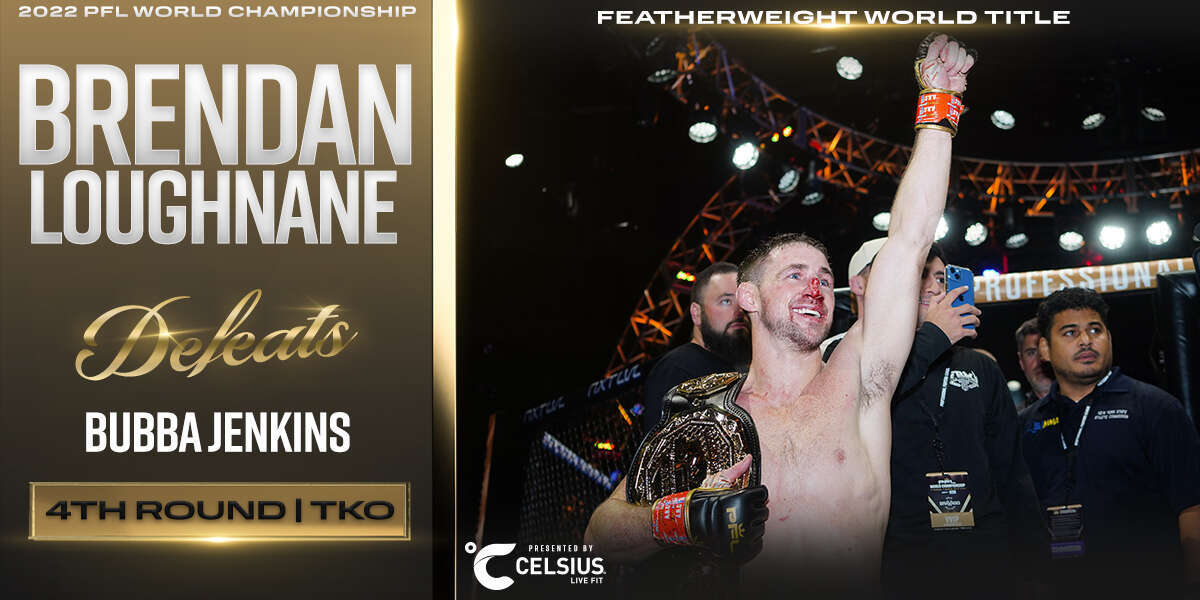 In perhaps the most anticipated bout of the evening, #3 seed Bubba Jenkins (19-5) takes on Manchester’s own #4 seed Brendan Loughnane (24-4). Both men enter this fight off arguably the biggest wins of their professional careers as they lock horns for the 2022 PFL Featherweight World Championship and accompanying million dollar prize.  In a classic stylistic clash, Jenkins enters as an incredibly credentialed wrestler, winning a national title in 2011 at Arizona State while Loughnane should hold the edge as a career striker.  With both fighters sitting at 5-1 under the PFL banner, something has to give in this tantalizing World Championship matchup!

Jenkins wastes no time trying to get the fight to the mat as he shoots but Loughnane defends well and returns with a low kick.  Jenkins is working to establish his jab early as Loughnane continually switches stances and makes himself difficult to read.

Jenkins lands a nice outside low kick of his own before firing a high kick that Loughnane just blocks.  Jenkin’s striking looks crisp early as the crowd gets behind the American.  Again, Jenkins shoots but can’t finish the takedown as Loughnane scampers out of his grasp.

Now Jenkins seems to be getting his timing down, landing a crisp right hook as he enters and changes levels for another takedown.  Loughnane is making him work for it however, landing a flurry of hammerfists behind the ear and forcing Jenkins to adjust his position.  Jenkins is working hard to finish this single leg at this point and he’s doing a good job peppering in short uppercuts to keep Loughnane thinking and a step behind.

Loughnane lands a nice straight right that gets some respect from Jenkins as they reset in the center of the SmartCage.  With a minute remaining in the round, Loughnane seems to be turning the tide and finding his range and rhythm, landing a nice straight right and a heavy calf kick to the lead leg of Jenkins.

Just as the momentum was swinging Loughnane’s way, Jenkins lands a big hook that moves him back and that will end an exciting back and forth opening round.

Round 2 opens with a low kick from Jenkins as both fighters land straight punches.  Loughnane lands a nice outside low kick and follows it up with a jab, but Jenkins answers quickly with a looping left hook that finds the target.

Jenkins is once again finding a home for his jab and mixing in low kicks well to keep Loughnane guessing.  Jenkins changes levels once again and he’s in deep on a double with his hands locked under the hips.

Loughnane however stays resilient and manages to break the grip of Jenkins before returning to the center of the SmartCage.  Loughnane lands another nice low kick but he’s having trouble landing punches and seems a little tepid to commit because of the takedown threat Jenkins poses.

Loughnane fires a heavy head kick but can’t find the mark as Jenkins gets his hands up at the last second before returning fire with a low kick.  It cannot be understated how much Jenkins has improved as a striker over his PFL tenure.

Jenkins fires a kick and Loughnane catches it and returns fire with a spinning back kick but can’t find a home for it.

Just as the round is coming to a close, Loughnane catches Jenkins below the belt and we’ll have a brief break in the action.  They restart and Loughnane lands a heavy roundhouse to the body before the bell and can’t help but talk a little talk as the round ends.

Loughnane likely enters round 3 down 2 rounds and will need to make something happen here, but Jenkin’s pressure is unrelenting as he keeps coming forward and landing straight shots and low kicks.

Jenkins catches Loughnane with a big right hand that appears to briefly stun him, but Loughnane is still fighting and coming forward.

The lead leg of Loughnane may be compromised as he’s having some trouble with his movement now, but despite that he lands a beautiful combination punctuated by a kick to the body.

Loughnane lands a nice teep kick followed by a heavy low kick but Jenkins still seems to be dictating the pace.  Loughnane seems to be picking up some steam now as he strings together some combinations with punches and kicks.  Jenkins however continues moving forward and landing his jab and attacking the legs in what is quickly becoming a war of attrition.

Jenkins decides to shoot but telegraphs his entry, allowing Loughnane to defend and fend off any danger.  Notably, Jenkins appears much fresher at this point in the fight than he has in the past in his career as Loughnane lands a beautiful uppercut.

It’s mostly kicks now for Loughnane and he’s having a lot of success going to the body.  With 30 seconds left Jenkins seems to be hurt bad! Loughnane senses his opportunity and unloads with a knee to the head and punches behind it! Jenkins is able to get on his bike and survive the end of the round but not before Loughnane lands 2 more big punches at the bell.

The championship rounds are underway after Loughnane had his best round of the fight so far.  Jenkins is doing a good job of making Loughnane pay for misses by chopping at the legs or firing the jab.

Loughnane lands another nice teep to the body but Jenkins catches it and attempts another takedown, but he’s unable to secure it as Loughnane quickly breaks and gets back to his feet.

Interestingly, the live odds have swung heavy in Loughnane’s favor, perhaps signaling the oddsmakers think Jenkins doesn’t have the gas tank to continue this pace for 2 more rounds.

Oh! Loughnane lands a big right hand right down the pipe and knocks Jenkins down! Jenkins attempts to recover but Loughnane refuses to give him the opportunity, following him to the ground and pouring on the damage with ground and pound!

What a come from behind victory!

Brendan Loughnane TKOs Bubba Jenkins in the 4th round to bring a PFL Featherweight World Championship back to Manchester!