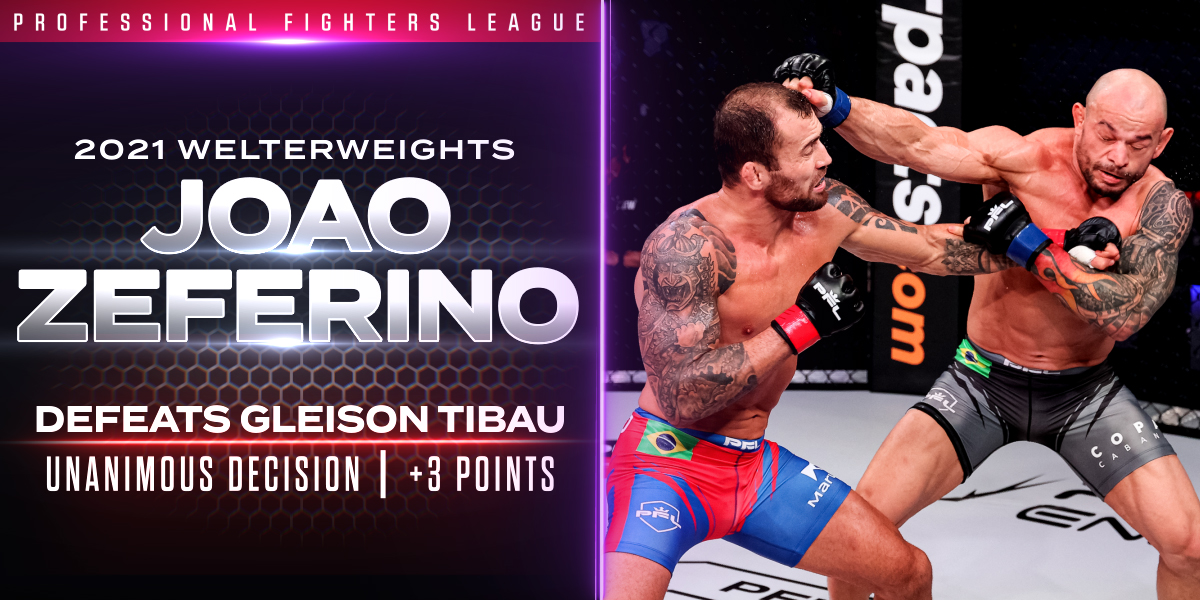 Two experienced Brazilians collided in the welterweight division on the PFL 2 main card as João Zeferino (25-9) made his PFL return against longtime UFC veteran Gleison Tibau (35-15). The two BJJ black belts have resumes littered with submission finishes. Zeferino qualified for the 2018 PFL playoffs, but was forced out due to injury. Tibau’s league debut marked his 50th career fight.

Zeferino pawed with his jab to start the fight. Both stepped into the pocket, but neither fighter was able to connect. Zeferino landed a heavy body kick and the pair traded heavy punches from boxing range. Another body kick from Zeferino found the midsection of Tibau. Zeferino looked for a choke, but Tibau easily defended and the pair clinched. After jostling for position, they separated and returned to range. A head kick from Zeferino missed and he spun with a backfist. Tibau fired a left hand, but it did not connect. The round closed with a final exchange on the feet.

Tibau powered his way into a double-leg takedown early in round two. Zeferino used a sweep to get back to his feet. The jab of Zeferino continued to be a weapon from range, as he kept Tibau at bay. The length of Zeferino seemed to frustrate his fellow Brazilian. They both winged power punches, but neither was able to land clean. Another body kick from Zeferino caught Tibau with a thud, but he took it well. A long left hand Tibau failed to connect as Zeferino was able to evade. A late clinch proved to be a stalemate as the frame concluded.

The chess match between the two veterans continued in the last frame. Zeferino landed a heavy right hand which prompted Tibau to shoot for a blast double. The takedown attempt was stuffed by Zeferino and the fighters returned to striking range. Tibau landed a left hook and was met with a hook to the liver from Zeferino. The action picked up with two minutes left as both fighters swung for the fences. A right hand from Zeferino backed up Tibau. He was able to control the distance with his jab and keep Tibau from landing anything of significance. Like the second round, they jostled for position to end the stanza.

The judges were called upon to decide the outcome and it was Zeferino who took the decision. He claims three points in the welterweight standings with the victory.