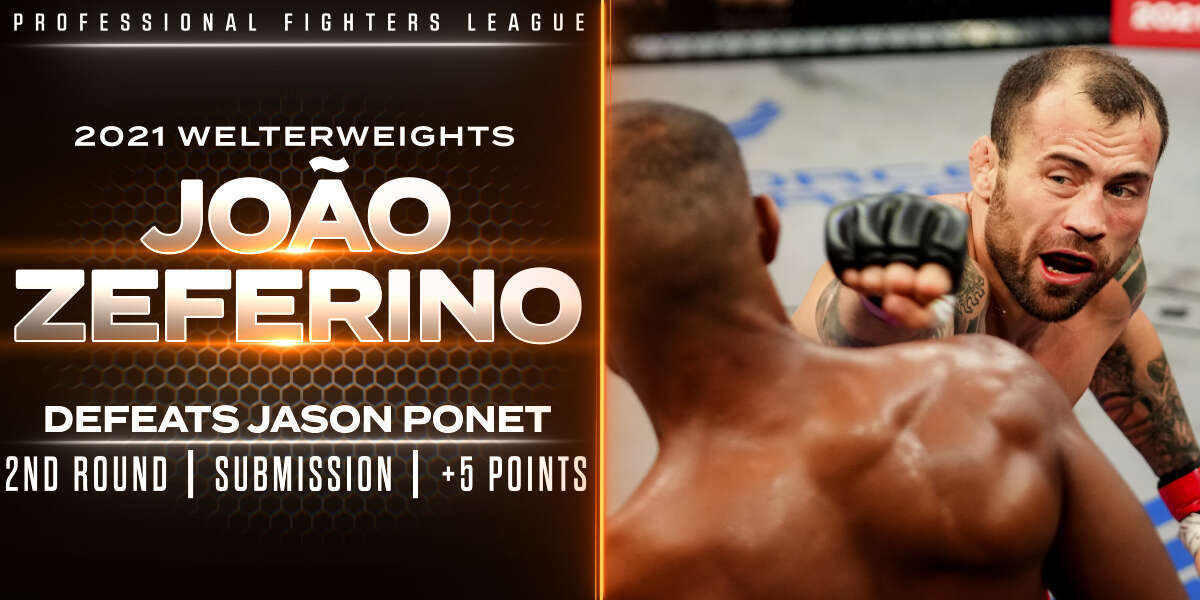 Zeferino storms back, punches ticket to Playoffs with submission over Ponet

PFL 5, 2021 featured some Samurai vs. Samurai action on ESPN+,  as “The Brazilian Samurai” Joao Zeferino took on the “Amazonian Samurai” Jason Ponet in a Welterweight showdown.

Zeferino entered the bout on a tear, winning four straight fights (two via finish) and most recently defeating Gleison Tibau via unanimous decision at PFL 2, 2021 to earn three points in the Welterweight standings.

Ponet, meanwhile, lost his last fight via submission against Ray Cooper III and needed a quick finish to re-establish himself in the 170-pound standings.

Would that motivate him to push the pace in search of the finish?

Zeferino literally sprints out of his corner and throws a flying strike. Ponet wisely steps aside, but the action is ultra tense early. Ponet drops Zeferino with a counter and follows up with a powerful shot on the ground. Referee Vitor Ribeiro takes a close look, but Zeferino continues to defend himself.

They’re back to their feet, Zeferino still shaking out the cobwebs. The pace slows considerably, and Zeferino clinches Ponet, pushing him against the cage. Zeferino drags Ponet to the mat briefly, but they pop right back to their feet to strike at range.

Low kick from Ponet lands. Now, Ponet presses forward with a rush of punches, and Zeferino is happy to counter. Ponet slips beautifully and rips back with a counter of his own, however, and Zeferino is again looking for the takedown. Another successful defense from Ponet, and he’s looking relaxed and at ease early.

Zeferino catches a kick from Ponet and puts him on his back, immediately passing to half guard. It appears Zeferino is working to set up an arm-triangle choke, but there’s not much there yet. Zeferino moves to mount, and Ponet bellies out, giving up his back, where Zeferino hammers away with punches.

Definitely a strong finish from Zeferino, but Ponet owned the early-goings there. That will be an interesting round for the judges to score — if they’re needed.

Ponet can still clinch a Playoffs spot with a stoppage in this round. Can he do it?

They paw at each other early, feeling out the action and waiting to see if one fighter will make a mistake. Zeferino scores with a strong straight right and immediately shoots, securing the takedown. He’s in Ponet’s half guard, hammering away with strikes.

Zeferino briefly threatens a kimura and releases it, moving to side control in the process. He steps over for mount. Easy money for the Brazilian here on the mat. Now, Zeferino’s looking for the arm-triangle choke, and he has it, squeezing his way to a victory as Ponet’s had enough. A tap, and it’s over.

It’s deja vu for Ponet, as he’s now lost his last two fights via arm-triangle choke. With the win, Zeferino earns five points and secures his place in the 2021 PFL Playoffs.