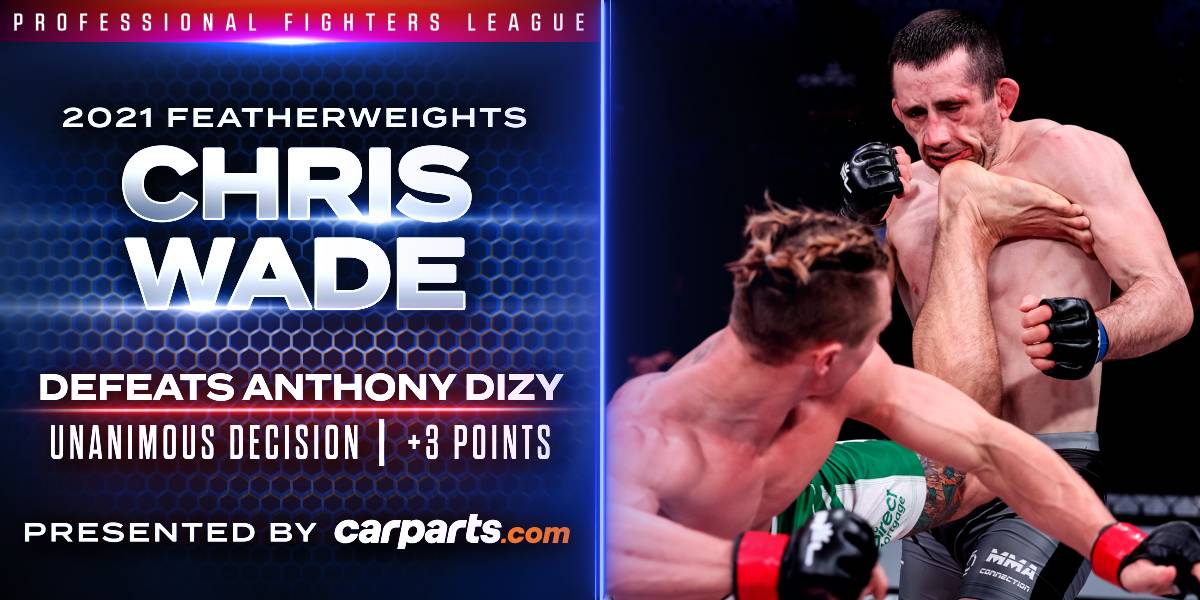 Veteran Chris Wade (18-6) is back for a third PFL season, having made the lightweight semifinals in both of his previous appearances. This time, however, the UFC alum is competing at featherweight and the American welcomed France’s Anthony Dizy (13-4) to the PFL cage in the season’s first event.

Wade rushed forward to open the contest and Dizy cracked him with a stiff jab. Just a few seconds later, Dizy caught him again and it allowed the Frenchman to secure a body lock. He took Wade to the ground along the fence. Dizy moved to side control, but it gave Wade a chance to return to his feet. It was short lived, however as Dizy brought him back to the mat. Wade attempted a kimura, but Dizy was able to defend and again moved to side control. Wade turned to his knees and Dizy moved to his back, but he could not secure both hooks. Wade reversed the position and attacked the neck of Dizy against the fence. Dizy did not panic and was able to escape the choke attempt. The wrestling pressure of Dizy continued until the round’s conclusion.

A body kick from Wade found the midsection of Dizy early in round two. Dizy wasted no time in closing the distance and looking to grapple. He used a body lock to put Wade on his back again, but Wade scrambled well to take top position. Wade hung on the neck of Dizy and delivered a steady stream of right hands as the French fighter fought to regain control with his wrestling. Dizy moved to the back of Wade with a minute remaining in the frame. Wade was able to create separation late and connected with a pair of kicks before the bell to end the round.

Dizy barreled into the clinch in round three, but Wade was able to prevent a takedown. When they returned to the center of the cage, Dizy changed levels and put Wade on the ground. The scrambling ability of Wade was on display as he worked back to his feet. A body kick from Wade was caught by Dizy and he pinned him to cage once more. Wade separated and launched a flying knee that split Dizy’s nose. Dizy sought a takedown as his nose leaked blood badly. The grueling affair went the distance.

The New Jersey judges were called upon to render a verdict and it was the heavy betting favorite Wade who earned three points in the featherweight standings for the decision victory.