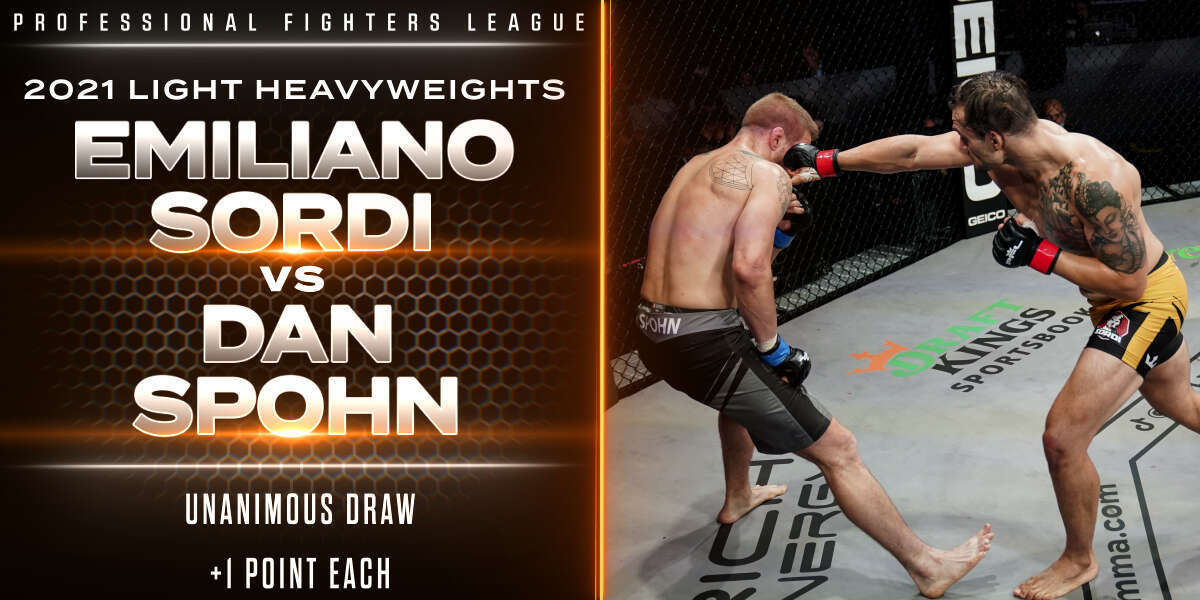 Sordi, who captured the 2019 PFL title with a dominant run of finishes, came into the bout off a unanimous decision victory over Chris Camozzi at PFL 2, 2021, earning him three points in the process. That said, his three points wouldn’t be enough to squeak into the Playoffs, and he knew he’d need a win of any sort to secure his spot.

Spohn, meanwhile, was in full desperation mode heading into his scrap vs. Sordi. After dropping his most recent fight to Marthin Hamlet via submission, Spohn found himself in a finish-early-or-go-home scenario against the former PFL 205-pound king.

Here’s how the action played out on fight night.

Spohn capitalizes on his distracted opponent and slams him to the mat, immediately working for a rear-naked choke. It looks deep, but Sordi defends and shakes Spohn off the top, where he goes to work with some ground-and-pound of his own. Spohn turtles and has no answers here before finally rolling and regaining half guard.

Sordi is a man possessed here, landing hammerfirst after hammerfist, some catching Spohn in the back of the head. Spohn verbally complains to the referee, but it doesn’t slow Sordi’s attack.

Spohn bumps out once more, giving up his back in the process, and Sordi tees off with more shots. Now, referee Vitor Ribeiro stops the action, citing shots to the back of the head. He takes one point from Sordi, and the action resumes.

Sordi throws a heavy right hand and dives on a leg, but Spohn counters with a front headlock. A roundhouse-back kick combo misses from Sordi, and Spohn survives the round.

The two fighters touch gloves once again to open the round. Sordi throws a body kick, which Spohn counters nicely with a 1-2 up top. Spohn lands a nice combination to Sordi’s dome, finish with a crispy left.

Sordi backs up Spohn and lands a nice head kick, putting Spohn on the defensive. The Ohioan looks for the takedown, but Sordi shrugs it off, and the two resume trading blows on the feet. This is slowly turning into a slugfest, and the fans love it, with each man getting in his shots. Spohn finds some success with uppercuts from the clinch, and Sordi’s had enough, dragging the fight to the mat with ease.

Just as it appears Sordi would transition to full mount, Spohn reverses him and winds up on top. That’s short-lived, as Sordi gives up his back and eventually shrugs off Spohn, who’s too high and loses position.

Now, Spohn turns into Sordi and regains top position. This is one grinding, tiring fight, and both fighters are showing it. Spohn works from Sordi’s back, and Sordi drops for a heel hook with seconds remaining in the round.

No dice, but it ignited the crowd and the commentary crew alike. Onto the final frame we go.

Spohn opens the round with a jab into a wild left hand, then scores with a leg kick. Sordi pushes him back, but Spohn counters nicely and catches Sordi’s attention. Low kick from Spohn lands, and Sordi again begins to push forward.

A low kick from Spohn turns into a cup-check, and Sordi immediately doubles over in pain. Spohn apologizes, Sordi recovers, and we’re back on with 3.5 minutes remaining.

The two exchange at range, with neither man landing anything of note. Spohn does appear busier, but Sordi is finding his openings as well. An apparent eye poke causes a brief delay in action once again, but they’re back at it with a minute remaining.

Spohn shows some desperation and opens up with his hands, but Sordi is still game, winging right back at his opponent with bad intentions. Sordi clinches and pushes Spohn against the fence with 10 minutes remaining, but Spohn defends. The fight ends there, and the two congratulate each other on a hard-fought effort.

That means both fighters earn one point, and Sordi squeaks past Cory Hendricks to lock down the fourth and final spot in the 205-pound Playoff picture. Despite having four points of his own, Hendricks loses out to Sordi via tiebreaker since Sordi fought twice in the regular season. Unreal.