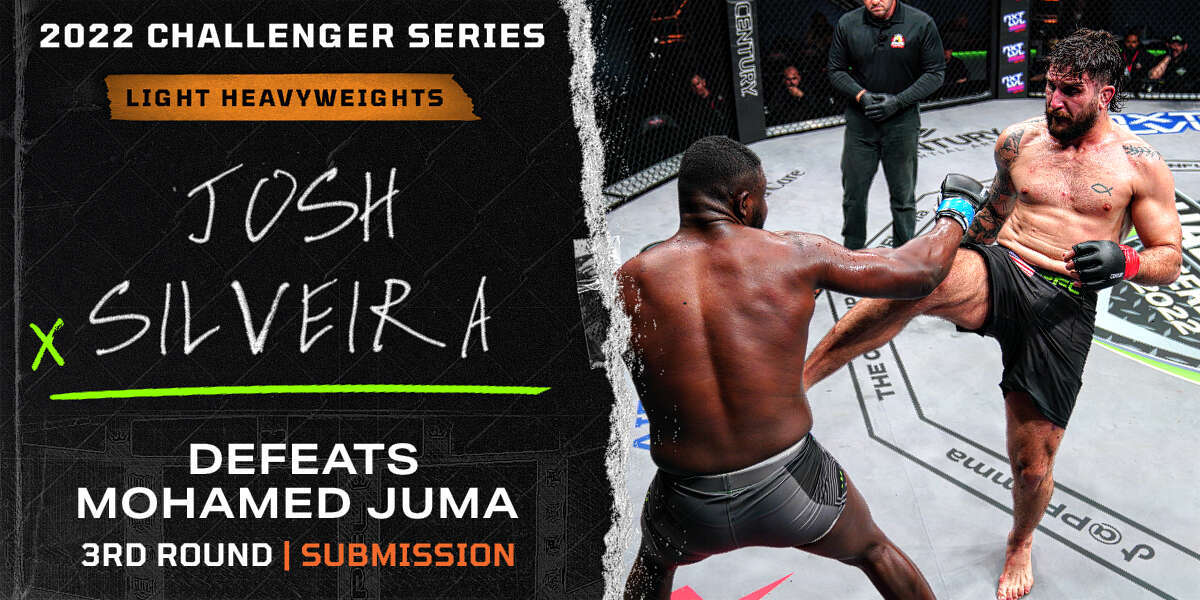 The 2022 PFL Challenger Series capped off its Friday evening festivities with a high-profile showdown between light heavyweights Josh Silveira (7-0) and Mohamed Juma (8-2).

Silveira, the son of American Top Team coach Conan Silveira, captured both the LFA middleweight and light heavyweight titles already in his young MMA career. Is a PFL world title in his future, too?

Juma wants to answer that question with a definitive “no.”

The Egyptian fighter is coming off just the second loss in his 10-fight professional career, a fight he dropped via disqualification due to a fishhook at UAE Warriors 23. Prior to that, he’d won eight straight –– all via finish.

This one’s underway, and they’re getting after it already. Juma appears completely unfazed by Silveira’s credentials, as he’s pumping a quick jab out there that caught his opponent’s attention.

Silveira closes the distance and elevates for a huge slam, immediately looking for an arm-triangle once they hit the ground. Juma, though, defends the choke, and he’s briefly back to his feet before Silveira dumps him once more with a strong body lock.

Juma works to the fence, and he’s back to his feet once again. Silveira lands a leg kick and circles away, resetting. Juma fires away with some punches at range, and Silveira looks to close the distance, but Juma circles.

Kick from Juma glances low, and Silveira needs a second to regroup.

They’re back at it, and Juma comes out aggressively with a series of strikes. Silveira uses that aggression against him though, clinching and forcing the fight back into his world.

The round ends with the two fighters clinching against the cage.

Silveira runs to the middle of the cage, but it’s Juma spamming 1-2s and forcing his opponent backward. He’s upping the aggression here, clearly pursuing a finish. Silveira ducks and secures the takedown, but Juma reverses, briefly winding up on top.

They scramble, and Silveira looks for a guillotine. He drops to his back, clamping down on the choke. Juma defends, and his head pops free, but the referee halts the action.

Interesting. Juma fishhooked Silveira to get free. Unreal. Remember how we mentioned he lost his last fight via fishhook?

The referee takes a point, but Silveira is OK, and the fight resumes. Silveira is understandably unhappy here, and he’s immediately back on a single as they get back underway.

Now it’s Juma looking for the guillotine, but there’s nothing there. Silveira gets the fight to the ground, and he’s immediately threatening the arm-triangle from half guard. It’s not there, but he advances to mount nonetheless.

Silveira ends the round in mount, raining down blows. He’s clearly unhappy with Juma at this point. One more round to settle it.

Silveira’s out aggressively, pushing Juma against the cage. Nice right hand lands for Silveira as Juma circles away. No wrestling or clinching from Silveira with one minute down in the final frame.

Strong body kick lands, and now Silveira changes levels and clinches. He drags Juma to the ground and immediately takes the back. The choke looks deep here, but Juma is somehow surviving.

There’s the tap, a two-handed tap nonetheless, and Silveira is fired up.

He’s in Juma’s face, letting him know that fishhook was the wrong move.

JOSH SILVEIRA GETS THE FINISH IN THE 3rd ROUND!#PFLonFuboTV pic.twitter.com/8pK9HE5fQD

Juma didn’t make it easy for Silveira, but the undefeated super prospect keeps his spotless record intact in the end with a third-round submission victory.

Cooler heads prevail, and Silveira and Juma appear to have squashed their beef, hugging it out after the final bell.