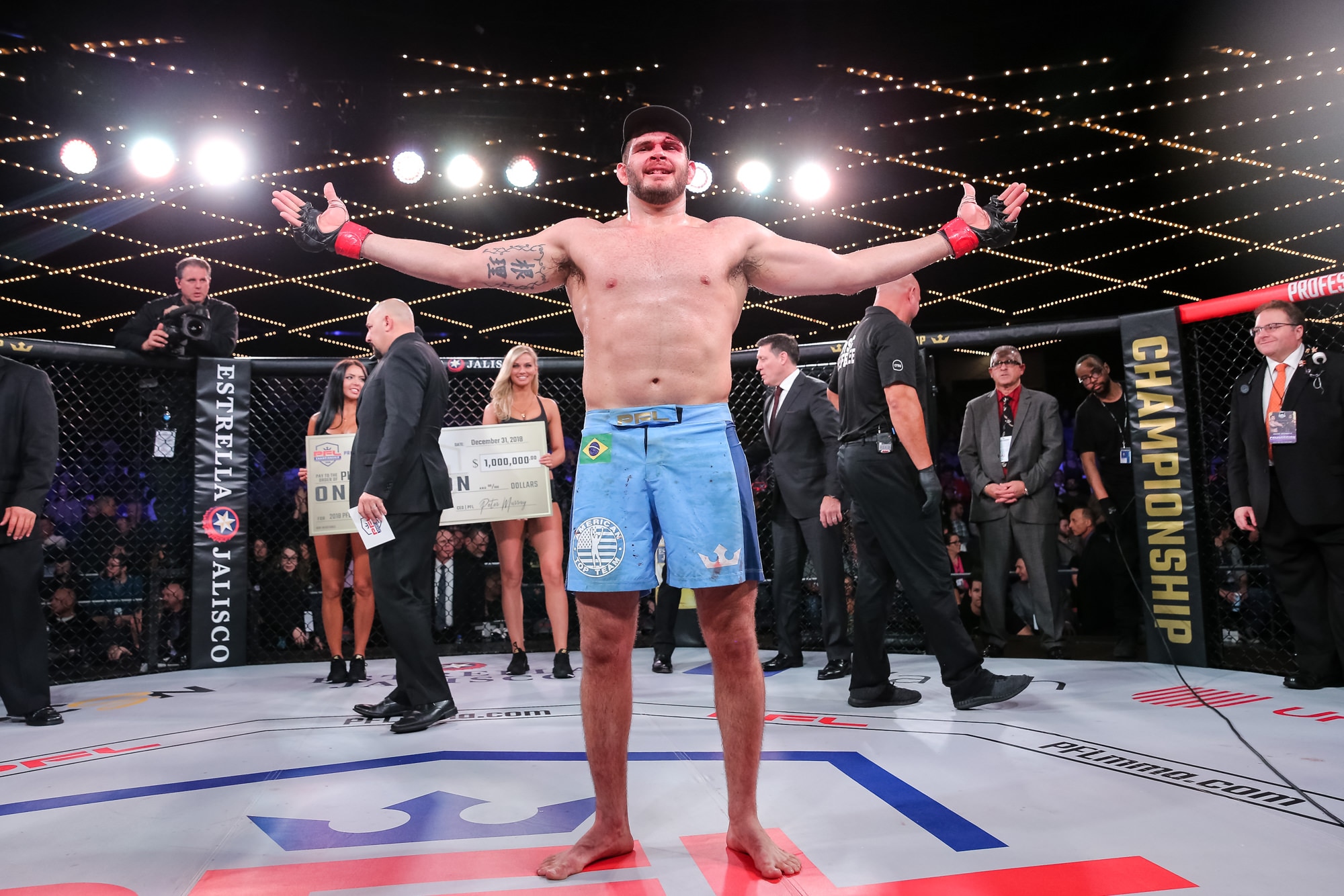 HEAVYWEIGHT: Lins, a former light heavyweight, made the smart move to bump up to the heavyweight division, and it netted him a cool million dollars for winning the Professional Fighters League’s tournament. He went 4-0 in 2018, finishing all four of his opponents, three of whom were UFC veterans. Though it was not a great year for heavyweight violence on the whole, Lins showed his well-roundedness, and while it was seldom pretty, it was highly effective. His long right hand dropped Alex Nicholson like timber, and he used the same punch to drop tournament favorite Jared Rosholt on his face. It took him less than a minute to lock up a guillotine on Caio Alencar for the win. In the final, with the seven figures on the line, he showed some diversity to his standup by going to the clinch and drilling Josh Copeland with vicious knees. Lins’ 2018 run is more proof that skill beats size, but “Monstro” made sure there was savvy violence all the way.

WELTERWEIGHT: I know that Cooper blew it in his PFL welterweight tournament final against Magomed Magomedkerimov, which is a noteworthy example of the fact that the 25-year-old still needs to improve his lacking ground game. Even still, “Bradda Boy” went 4-1 on the year and absolutely destroyed his previous four opponents, including two demolition jobs on the perennially underrated Jake Shields, who is at worst one of the 25 best modern MMA fighters ever. Of course, it is not just that he generated stoppages. Cooper is a positively savage, two-handed puncher with serious power. While he polished off the heavy-hitting Pavel Kusch in a mere 18 seconds in August, he is not necessarily a one-hitter quitter. What makes Cooper more than a standard puncher is that he has a natural knack for finishing opponents on the ground. Look at how he finished Shields both times, as well as how he pounded out Handesson Ferreira. Cooper’s accurate, swiping blows on top are the kind of thing you just cannot teach. I may be biased since I cut my teeth in this sport watching his father smash dudes in the face in Shooto, but this Cooper appears to be the finest, most violent form of the fighting family.

LIGHT HEAVYWEIGHT: Full admission, I have an affinity for O’Connell, but not just because I have done multiple radio shows with him for SiriusXM Radio. Actually, that angle buttresses part of my point here: O’Connell is a smart, savvy guy who just happens to love the throes of MMA war. Typically, we laud fighters who are “above the sport” and can navigate their careers in and out of the cage in such a way to minimize damage and maximize profit. Well, “The Real OC” in 2018 was not afraid to dive into the fire for a million dollars. After punching out UFC vet Ronny Makes in June, he took a vicious spinning back kick to the body from Bozigit Ataev. Did it deter him? No. O’Connell leaped into the Professional Fighters League’s 205-pound tournament bracket, outpunched Dan Spohn and then clobbered favorites Smealinho Rama and Vinny Magalhaes. There is nothing fancy about O’Connell’s game. At best, he is a marginally above-average athlete but makes up for it with a never-say-die attitude and a cleverness about how he chooses to brawl. I think there is something truly beautiful in this sport when you see someone who is smart as a whip but so down in the trenches and beholden to the violence of MMA that they cannot operate any other way. Think about someone like Joe Lauzon, who does not need this sport but just loves it. That describes O’Connell, too, and that sort of ill-advised badass nature earned him a million dollars when he made tourney favorite Magalhaes quit on New Year’s Eve and allowed him to retire with seven figures and then ride off into the sunset. That is how you punctuate an MMA career, folks.