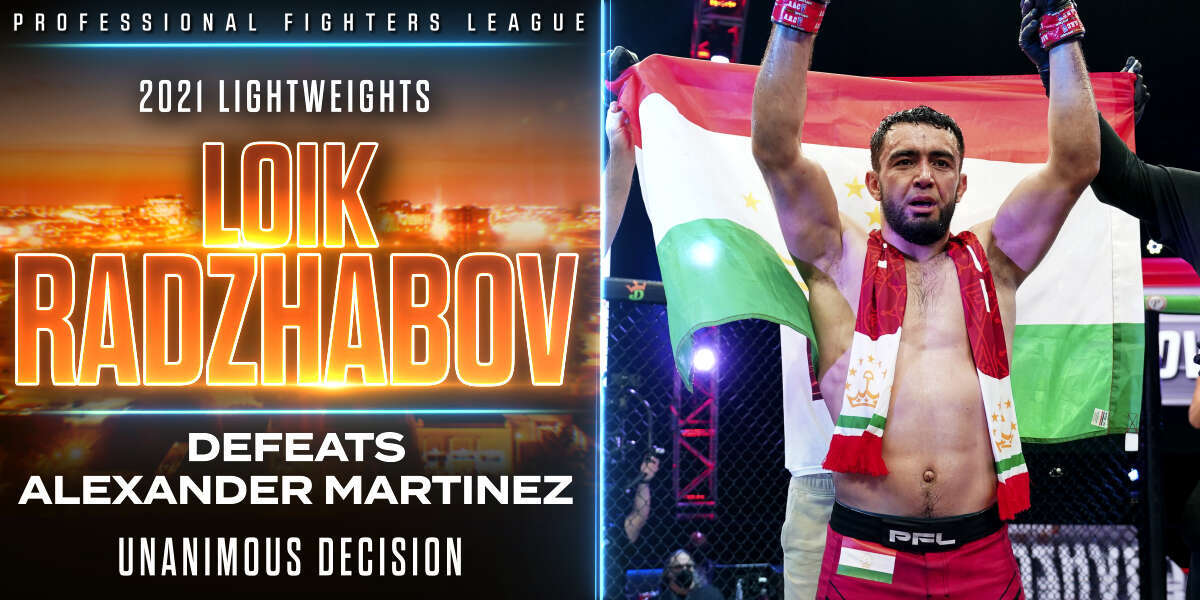 The PFL Playoffs 1, 2021 fight card kicked off on ESPN2 with a rematch between No. 1 seed Loik Radzhabov and No. 4 seed Alexander Martinez. Previously, Martinez defeated Radzhabov via split decision, bringing plenty of intrigue to the table when the two squared off Friday evening in Hollywood, Fla.

Would Martinez do it again, or would the top-seeded Radzhabov learn from his mistakes and adjust?

Radzhabov wastes no time getting inside, pushing Martinez against the cage. Martinez smartly backs away though, and they resume striking –– and they are getting after it. Strong strikes from each fighter land, with Radzhabov pushing forward and Martinez countering.

Now, Radzhabov searches for another takedown, and he gets it. Martinez works from full guard, scooting toward the cage for additional leverage. Radzhabov briefly shuts it down, but Martinez pushes away, creates space, and escapes back to his feet.

Halfway through the first frame, they’re back on their feet striking. A kick glances low from Radzhabov but Martinez shakes it off and the action resumes. Radzhabov again pushes Martinez against the cage. A strong right hand lands from Radzhabov and he’s on the hunt as Martinez retreats. Two more strong strikes find the mark, and Radzhabov’s finding his range. Somehow, Martinez eats everything and stays on his feet though, and we’re off to Round 2.

They’re right back after it for Round 2, Radzhabov pressuring and Martinez countering. Radzhabov’s in on the takedown, but Martinez reverses beautifully, briefly putting Radzhabov on his butt. Radzhabov’s smart to it, though, and he counters. They’re back to their feet.

Radzhabov lands a powerful leg kick that drops Martinez. They head to the mat, and Radzhabov takes top position before Martinez initiates a scramble. Radzhabov takes the back but can’t find the finish, and Martinez again explodes back to his feet. What a pace in this fight. They end Round 2 on the feet, slugging it out until the bell sounds.

Both fighters attempt leg kicks, and they clash shins. Radzhabov throws again, this time landing on the outside of Martinez’s lead leg. Takedown from Radzhabov, and Martinez briefly searches for the arm-in guillotine before letting it go.

Radzhabov continues to work from half guard, but Martinez initiates a scramble, giving up his back in the process. They pop to their feet, but Radzhabov drags Martinez to the mat and peppers away with strikes. He looks to sink his hooks in, but Martinez rolls instantly and winds up on top for a moment, only for Radzhabov to scramble back to his feet and reverse position yet again.

Martinez is in on a high-elbow guillotine, and it looks tight! Radzhabov falls to his back to escape, and it works, as Martinez has to readjust and loses the submission in the process. Radzhabov shoots for one final takedown before the bell. This one’s a wrap. The judges have their work cut out for them.

After an insanely high-paced grappling affair, the judges turned in their scorecards.

Radzhabov learned from his first fight vs. Martinez, and the judges took note, awarding him the unanimous-decision victory. He moves on to the 2021 PFL World Championship, while Martinez is eliminated from competition.

“I’m putting big hopes on the final fight … I have to bring this title to my home country of Tajikistan,” Radzhabov said after the fight.