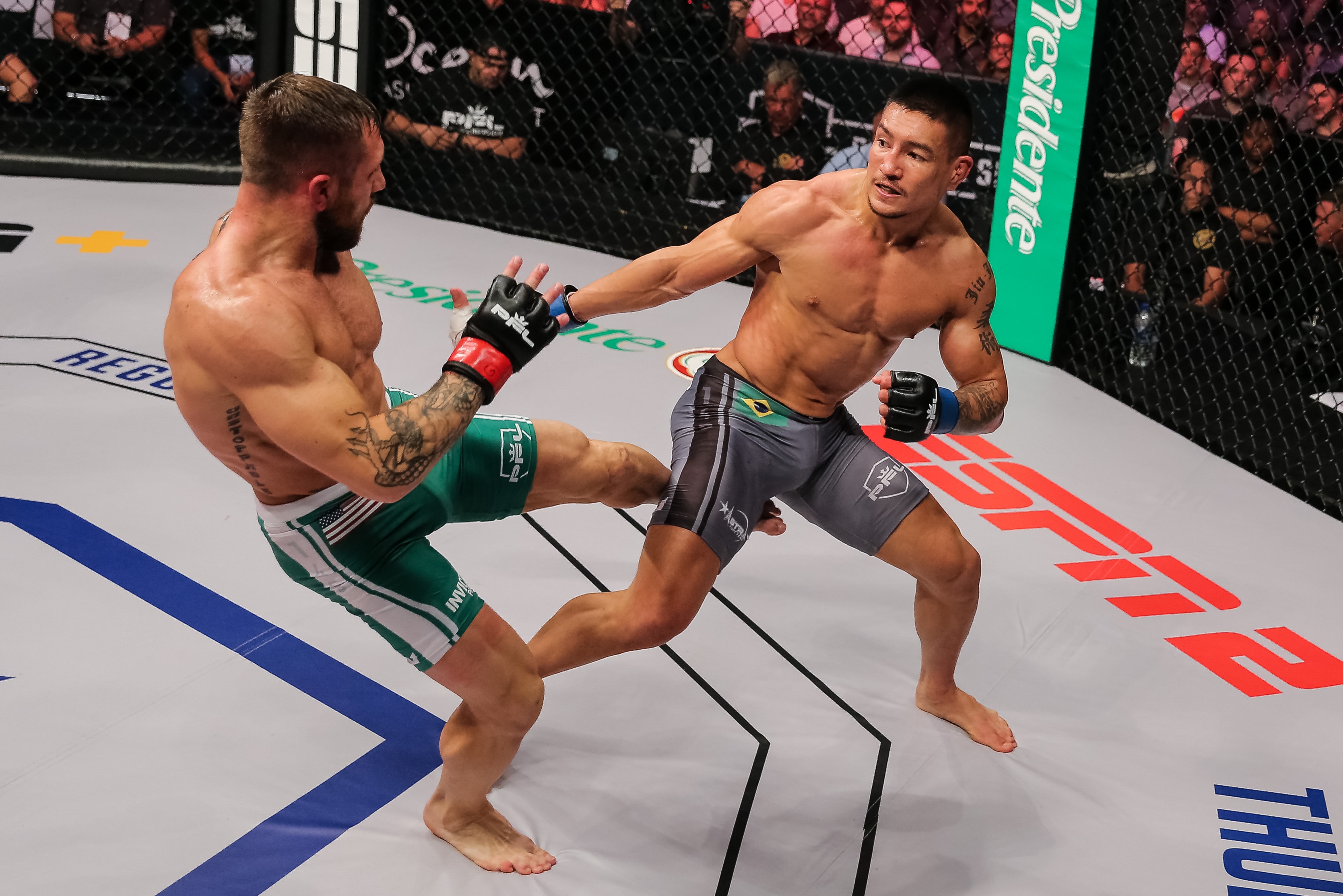 On July 25th in Atlantic City at Ocean Casino Resort, the featherweights and lightweights took to the cage for the second and final time in the regular season. It was their last chance to earn points in the standings and qualify for the playoffs. Here are some key takeaways.


“The Killer” Throws Knee of Steel in Back-to-Back Fights


At PFL 2, Movlid Khaybulaev’s flying knee made history, as he secured a 1st round 10-second knockout for the fastest finish in the PFL record books. At PFL 5 “The Killer” nearly struck again against Andre Harrison.


Khaybulaev would take his time in Atlantic City, waiting until the end of round one to strike Harrison with the most dangerous knee in mixed martial arts, but Harrison would stay alive like Vito Corleone, battling back as Khaybulaev revealed more from his playbook with devastating ground and pound. The bell ultimately saved Harrison, as the ref appeared to be seconds away from stepping in when round one ended. Khaybulaev was so focused on finishing the fight, the highly ranked featherweight would need to be dragged back to his corner, making many believe he had finished Harrison.


Harrison rose like a phoenix and lived to see the final two rounds, giving back what the dangerous fighter threw his way, forcing the judges to give both men the fight in a majority draw (1 point awarded to each fighter).


Now, Harrison and Khaybulaev’s eyes turn to Vegas. Both fighters qualified for the playoffs, Khaybulaev as the #2 seed (7 points) and Harrison as the #5 seed (4 points). Khaybulaev will face #7 Daniel Pineda in the quarterfinals, while Harrison will take on #4 Alex Gilpin.


With Jorge Masvidal’s “knee of doom” vaulting him to welterweight stardom, can Khaybulaev’s “knee of steel” lead him to championship gold this October in Las Vegas?


“The Party” rolls on, as Lance Palmer earns his first career TKO win!


Lance “The Party” Palmer’s guest list grew at PFL 5, as the 2018 featherweight champion took down Luis Rafael Laurentino in Atlantic City, securing his first career knockout with a 3rd round TKO. Palmer is now a perfect 7-0 in the PFL, and he enters October’s playoffs as the #1 seed in his mission to earn back-to-back titles.


Palmer faced championship level competition in Laurentino, who walked into PFL 5 in second place at 145 pounds. Throwing the second hardest strikes of the night, Palmer brought some serious punch in the PFL’s return to Atlantic City, stifling Laurentino’s offense as the Brazilian would only throw 18 strikes. Overall, Palmer outlanded Laurentino 90-12.

Now Palmer lines up the competition this October, as he heads to the party capital of the world hoping lady luck strikes twice.


It’s not March, but there are bracket busters and October mayhem as we head into the 2019 PFL Playoffs.


As the seeds for the featherweight and lightweight divisions were decided, two familiar faces asserted themselves at the top of the 145 and 155-pound brackets.


Lance Palmer and Natan Schulte set themselves in the best possible position to repeat their $1 million glory from 2018 by both securing the #1 seeds in their respective divisions. Now the returning champs must again fight twice and win twice in one night to earn a spot in the New Year’s Eve Championship.


Ghosts haunt both of these fighters as if they’re named Venkman and Spengler, as pivotal 2018 rematches can await both champions.


For Palmer, it’s a potential semifinal rematch with Andre Harrison. If they both win their quarterfinals, they’ll face off for the third time in their careers. Harrison won the first meeting by unanimous decision in 2017, taking the WSOF title from Palmer. “The Party” then got one back when he defeated Harrison in last season’s semifinals by unanimous decision.


At 155 pounds, Schulte can see his 2018 semifinal opponent, and a man looking for revenge, Chris Wade, if they both make it all the way to the Championship (they are on opposite ends of the bracket).


Wade has been looking for vindication since his controversial semifinal loss to Schulte by split decision last season. It was Wade’s second loss to Schulte, as he was also beat by unanimous decision during the regular season. Wade entered this year saying he’s on a mission “to right wrongs”.


Will it be straight chalk? Will Wade gain his vengeance? Can we see a magical run from a lower seed? The only way to find out is to watch things get real on ESPN, the Worldwide Leader in Sports, this October!


Cagenomics: The Fastest Strikes from PFL 5


The PFL continues to evolve the sport of mixed martial arts, as we bring you Cagenomics. Pull out your spreadsheets and get ready for the fast and furious who made an impact at PFL 5.


Lance Palmer: The Party crashed into the face of Luis Rafael Laurentino at 21.9 MPH on the road to a third-round TKO to clinch the top seed. The 2018 champion would not only crack the fastest, he’d land all but 20 of his 110 strikes thrown and send the Brazilian down twice with two takedowns on two attempts.


Peter Petties: The man who practiced “Wu Tang-Shaolin” style would be sent back into the rugged lands of Shaolin at PFL 5, but not before clocking in the second-fastest thrown punch at 145 pounds at 17.3 MPH.


Luis Rafael Laurentino: While he was dropped by the fastest man at featherweight, Laurentino threw the third-fastest strike of 17.2 mph. While Laurentino would land one of the fastest strikes of the night, he would be out-landed by Lance Palmer 90-12, as “The Party” dominated at PFL 5.


Nate Andrews: The snake’s bite would be the fastest at PFL 5, as the 155-pounder threw a shot at 2018 finalist Rashid Magomedov that clocked in at 25.7 mph, over 12 mph more than Magomedov’s fastest strike.


Loik Radzhabov: The Tajikistani fighter not only got a win over Ylies Dijroun at PFL 5 but the second fastest strike at 155-pounds, as the Jaguar’s paw attacked at 17.7 mph. Radzhabov will need that power this October, as he will face second-seeded Islam Mamedov, who has won 17 fights in a row.


Akhmed Aliev: Despite losing a unanimous decision to Chris Wade at PFL 5, Aliev still walks into October’s playoff bracket as the #4 seed. Aliev threw the third fastest lightweight strike at PFL 5 at 16.8 mph, but landed just 33% of his strikes thrown (23/70) against Wade.