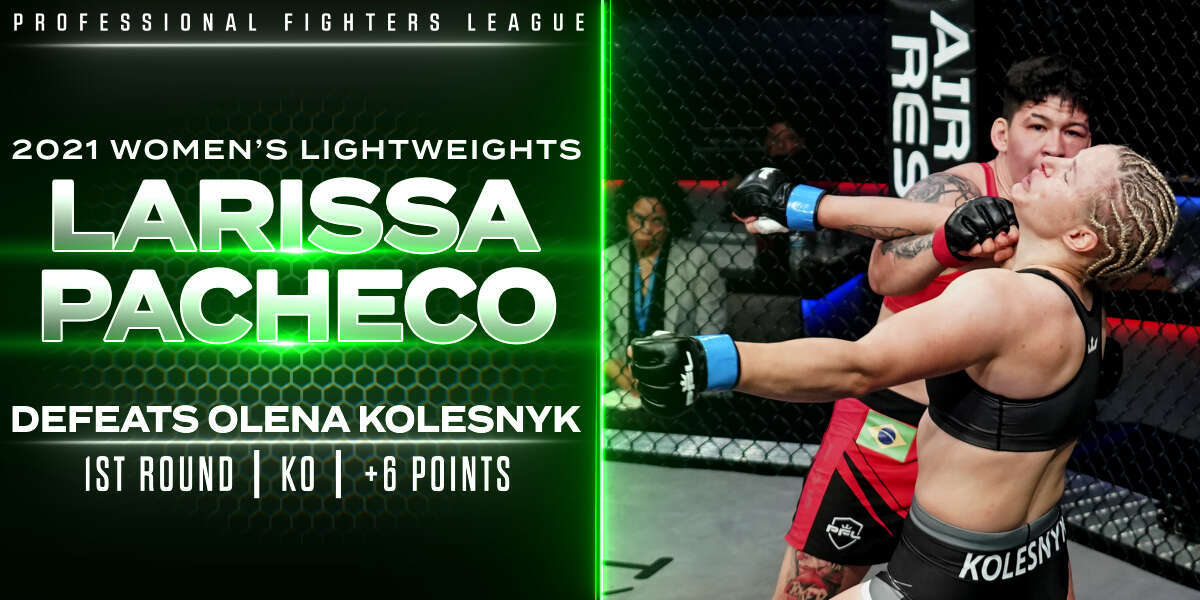 Pacheco turns tables, knocks out Kolesnyk for another six points

Fresh off a first-round TKO in the opening round of her 2021 season, 2019 PFL Women’s Lightweight runner-up Larissa Pacheco returned to action Friday evening at PFL 6, 2021 to take on Olena Kolesnyk.

While Pacheco entered the bout with momentum aplenty, Kolesnyk stumbled to the cage. She lost her last three bouts and missed weight ahead of her PFL 6, 2021 scrap against Pacheco, putting her back firmly against the wall in the process.

Could she bounce back or would Pacheco continue to roll?

Inside leg kick immediately lands from Pacheco, and they’re firing away early. Strong counter from Kolesnyk gets Pacheco’s attention, and they are swinging back and forth, each woman landing in the process. Having enough of that, Pacheco clinches and forces Kolesnyk against the cage.

They separate after a brief clinch and return to range. Kolesnyk is looking for the big left early, and it’s finding the mark on occasion but never solidly enough to put Pacheco away. High kick from Pacheco misses, and Kolesnyk taunts her for it. Pacheco responds with another clinch, securing the body lock against the fence.

Not much happening in the clinch, and they finally break away, Pacheco landing a strong punch on the exit. Kolesnyk is absolutely loving the battle at range, smiling and taunting as she charges forward with a flurry of punches.

And that is why you can’t move in a straight line with your chin in the air. Pacheco times the counter left-right beautifully, knocking Kolesnyk out just as she sensed a potential finish of her own. What a turn there.

Pacheco with another brutal first-round knockout. Who saw that coming?

Six more points for Pacheco gives her 12 total and comfortably secures her spot atop the PFL Women’s Lightweight standings. Kayla Harrison can tie with another first-round finish of her own in the night’s main event, but it’s a perfect 12 for Pacheco heading into the Playoffs.