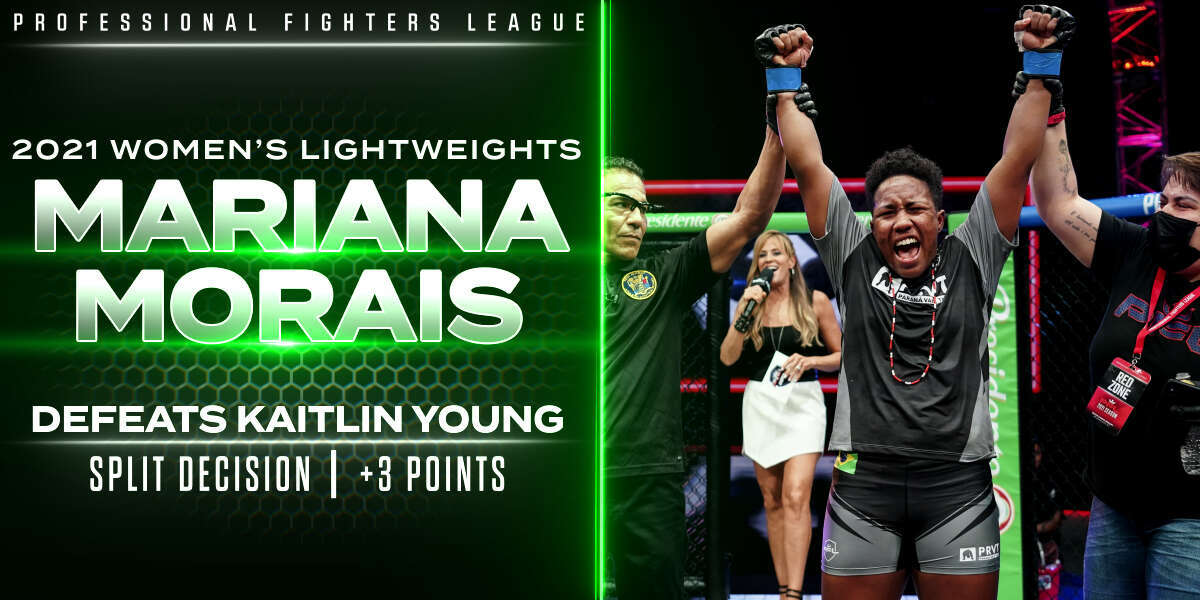 Young entered the bout fresh off a decision victory, giving her three points in the PFL Playoffs standings, while Morais most recently lost to Kayla Harrison, putting her in a must-win situation.

The two fighters feel out the action for just a moment, and Young opens up with a crispy 1-2 that Morais counters nicely. They briefly tie up and Morais looks for a throw, but there’s nothing there. They’re back to striking range.

They tie up again, and Young lands a nice right hand on the break. Young controls the distance early, avoiding any significant offense from Morais. When they engage, however, Morais is having some success with her counters to Young’s offense.

You’d never know Young had three points in hand and just needed to win to move on. These two are throwing heat, and they’re in each other’s face nonstop. Beautiful left from Morais lands, and Young is noticeably slowing her output. She doesn’t look tired, but perhaps she’s realizing Morais poses more of a threat than she may have thought on the feet.

And just as I say that, Young sets up a beautiful high kick that puts Morais on her heels. A definite momentum shift there, and Young follows up aggressively. Morais ties up and tosses Young to the mat with authority — but Young sweeps!

The round ends with Young on Morais’ back, firing away with ground-and-pound. What a final minute there.

Fighter Performance Rating (FPR) had Young at 83 and Morais at 80, further highlighting just how effective each woman was in Round 1. They get right back to action for Round 2, with Young pressing forward and landing an early combo to Morais’ dome.

Young looks a little slicker here, moving her head and slipping punches rather than simply plodding forward and engaging in a fire fight. That said, there’s no shortage of action in Round 2, as the two appear happy to stand and trade, with each having her moments.

Young tests another high kick, but it misses the mark this time. Former UFC Strawweight Champion, Jessica Andrade calls for “more combinations” from Morais, and she obliges, throwing a series of punches toward Young.

This bout is becoming a battle of precision (Young) vs. power (Morais), with the Brazilian loading up a bit more on her punches and kicks. Young lands another head kick, but Morais powers through it and clinches, once again tossing her foe to the mat. Morais enjoys a few moments of control from the top, but Young scrambles back to her feet.

Nice 1-2 from Morais finds its mark. Young throws a nice body kick and continues to pressure as the round ends. Another close one. If this fight goes to a decision, the scorecards could go anywhere.

They touch gloves, and we’re underway for the final five minutes in this bout. FPR scored Round 2 for Morais (63), barely edging Young’s score of 59. Every metric — including the eye test — says this fight is close and these five minutes will determine a winner.

More of the same for Round 3, with both women standing at range and trading blows. They both look fresh and quick, with no noticeable decline from the opening frame. Morais looks more comfortable as the fight goes, and she’s now tying together combinations and keeping Young from landing anything noteworthy.

Morais is running away with the volume game here, landing almost at will while Young appears content to chip away with counters. Young, surprisingly, attempts a takedown with under a minute to go and winds up on her back with Morais hammering away.

The bell rings, ending the fight, and it appears Morais took Round 3. FPR agrees, giving her a 78-48 edge in the final frame.

We’ll see how the judges score the first two rounds.

The judges agree: That was a close fight. In the end, though, they saw it for Morais, giving her the split-decision victory and three points in the Women’s Lightweight standings.