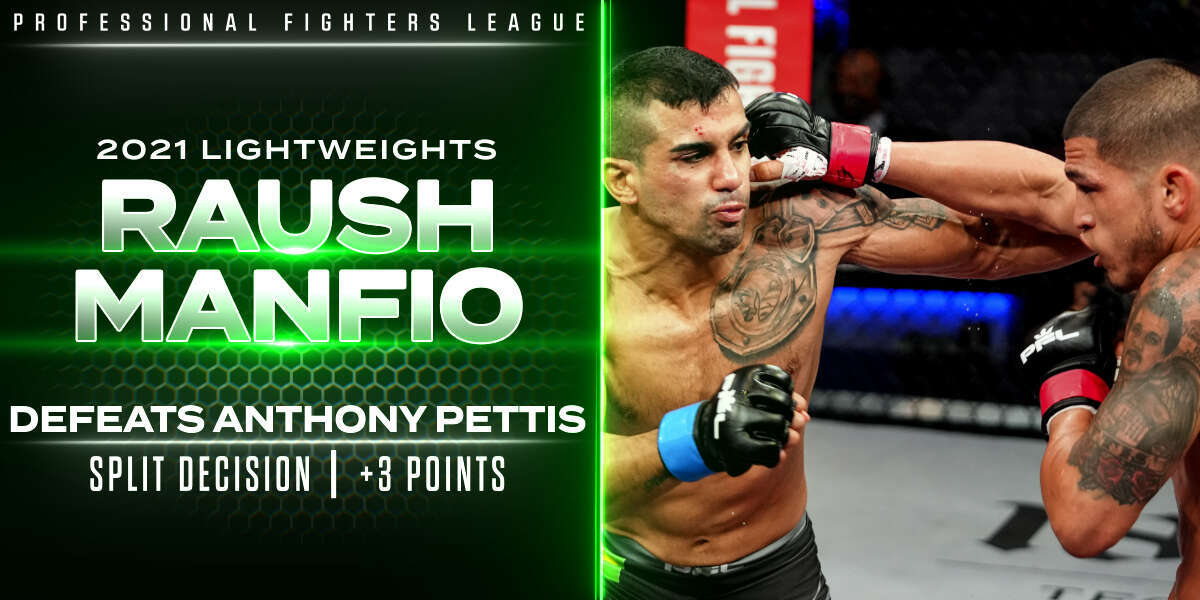 Former UFC champion Anthony Pettis came into the 2021 PFL Lightweight tournament a heavy favorite … and then he lost his opening-round matchup against Clay Collard at PFL 1, 2021.

This put Pettis in desperation mode Friday evening, as he needed to finish Raush Manfio at PFL 6, 2021 if he wanted to punch his ticket to the PFL Playoffs and contend for the $1 million prize.

They touch gloves, and Pettis lands two inside leg kicks early. Manfio looks for the straight right, but it’s not there. Pettis responds with a push kick. Solid action early, with Pettis looking completely changed from that loss to Collard. He’s active and aggressive, showcasing some of his signature creativity in the process.

A crisp left hand lands for Pettis, catching Manfio’s attention. Pettis spins, but the kick largely misses. Right hand from Manfio glances off Pettis, and Pettis circles. Manfio surprisingly appears content to strike at range, as he’s not actively pressuring or pursuing a clinch situation to this point.

Pettis lands a nice right hand, responding to the instruction from his coach Duke Roufus, who asks him to throw more punches and to not get sucked into the kicking game.

Another right for Pettis lands, followed by a leg kick, and the round is a wrap.

Pettis comes out firing once again, pressuring Manfio and landing a series of punches. Manfio lands a nice right on the exit, though, capturing Pettis’ attention. The two throw simultaneous kicks, and Manfio’s goes low, catching Pettis in the groin.

A short break, and Pettis is good to go. They’re right back to trading, with Pettis chopping away at Manfio’s lead leg. Manfio hunts him down, looking for the big counter. Pettis looking relaxed and confident here, shuffling and beginning to style a bit on Manfio.

Double jab-right hand lands for Pettis, and Manfio responds with a kick which again goes low. Pettis reacts immediately and takes a moment to recover. He’s good in just a few seconds, and they’re back after it.

Pettis closes with some taunting, sticking his chin out and attempting to bait Manfio into throwing. He doesn’t take it, and the round ends.

The round begins … and we’re paused already, as referee Keith Peterson spots a giant glob of petroleum jelly on the back of Manfio’s neck. They clean that up, and we’re officially off for Round 3.

Both fighters look active here, and Manfio lands a strong right hand, putting Pettis on wobbly legs. Manfio purses the finish, and Pettis falls to his back, seemingly happy to play guard. They return to their feet, and Manfio is all over Pettis once more, hurting him with a series of strikes. They clinch against the cage, and Manfio lands a knee, dropping Pettis again.

The finish feels near, but Pettis continues to survive. They separate, and Manfio gives him one more knee for good measure on the break. Pettis is visibly showing damage on his left eye now. Pettis slows his output now, playing things a bit safer after being clipped repeatedly here early in the round.

With two minutes left in the final frame, Pettis appears to be coming back to form, chopping at Manfio’s legs with kicks and landing a nice check hook. Manfio is still controlling the action though, and he’s narrowly missing with power shots from range.

Manfio lands a low calf kick, and it visibly hurts Pettis. Twenty seconds left, Pettis attempts a wheel kick, but Manfio crowds it and avoids damage. High kick from Pettis misses, and they swing for the fences to close things here.

If Manfio earned a 10-8 there in Round 3, these scorecards will be interesting, to say the least. Let’s see what the judges have.

The results are in, and it’s a split decision … for Manfio. He earns the biggest win of his career and another three points in the PFL lightweight standings, giving him six total and punching his ticket to the Playoffs.