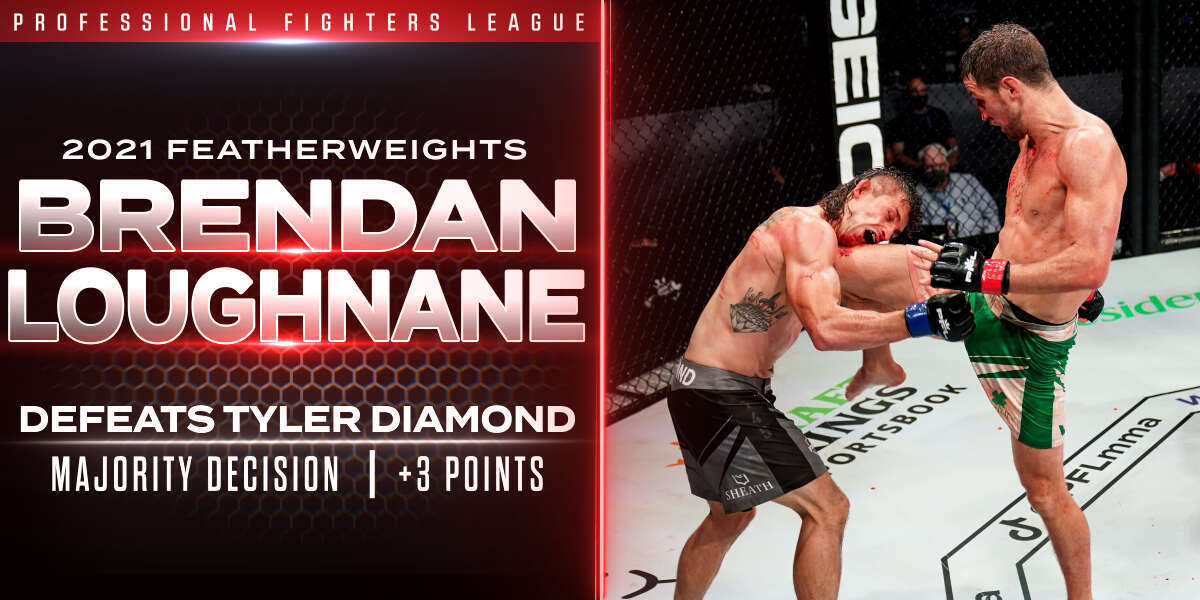 After finishing Sheymon Moraes via first-round TKO at PFL 1, 2021, Loughnane catapulted himself to the top of the 145-pound rankings with six points. Thanks to his handiwork in that bout, Loughnane enjoyed a massive opportunity against Diamond at PFL 4, 2021: Finish Diamond in any round and enter the 2021 PFL Playoffs as the No. 1-seeded Featherweight.

Diamond, himself coming off three straight victories, needed to make a statement, too. By defeating Loughnane, Diamond would not only make a push for the 2021 PFL Playoffs, but he’d steal Loughnane’s momentum in the process.

So who got the job done?

Before the fight even begins, the fights jaw at each other, setting the stage for the chaos that’s about to ensue. Loughnane looks incredibly calm and relaxed early, throwing a high kick to feel out the distance. Diamond responds with a fast right hand that comes up short of its target.

Loughnane lands a sneaky right hand before circling away from Diamond’s power on the counter. Diamond lands two leg kicks, and Loughnane responds with one of his own. Diamond lands a strong counter that catches Loughnane’s attention. Now, Loughnane pushes forward and lands the low calf kick. Diamond responds with a winging overhand right that misses the mark once again. He’s loading up on that, looking for the early show-stopper.

Loughnane with a left high kick, followed by a right low calf kick. Impressive work thus far from Loughnane in the kicking game. Now he throws a spinning back kick. Diamond just can’t close the distance and land, but he is the aggressor here, constantly moving forward and pressuring.

No time’s wasted as they open up Round 2, as Diamond and Loughnane resume throwing power shots. Loughnane again elects for the head kick, while Diamond looks to respond with that overhand counter. Thus far, Loughnane’s control of the distance has been impressive, as Diamond repeatedly comes up just short on the end of all his strikes.

A huge uppercut from Loughnane lands, and Diamond is on skates. He falls to his back, and Loughnane swarms. In pure survival mode, Diamond ties up Loughnane and avoids further punishment for now, returning to his feet and swinging away with massive shots that are miles from home.

Diamond, clearly still hurt, shoots a lazy single and flops to the canvas, giving Loughnane an opportunity to pounce. An upkick from Diamond appears to land, and Loughnane retreats. What a sequence! Now, it’s Diamond on the hunt, but Loughnane immediately shifts the momentum and scores a takedown of his own. He’s on top inside Diamond’s guard, landing shots to close out the round.

Recognizing their shared heart and grit, the two touch gloves to kick off this final frame. Loughnane shoots early and gets Diamond down, but the American pops back to his feet immediately, and they resume the striking battle. Loughnane scores with an uppercut and right hook, rocking Diamond and sending him sprawling for a low single. Nothing there. Loughnane continues to swarm, but Diamond pounces again, this time scoring the takedown and winding up in Loughnane’s half guard. Diamond just doesn’t quit.

After some top control from Diamond, Loughnane explodes to his feet and shoots for a takedown of his own. He gets it, but referee Keith Peterson determines he grabbed the fence in the process and stands them up. More power shots follow, and Diamond shoots a double. He secures the takedown, but Loughnane’s back is pressed against the cage, and he’s looking to stand. Diamond sucks out his hips and plants him on his back. Now, Diamond works from Loughnane’s half guard, and momentum appears to shift in the American’s favor.

Some ground-and-pound from Diamond puts Loughnane on the defensive, and he eventually works back to his feet. Another power shot from Loughnane lands but Diamond shoots. Loughnane shrugs it off and lands a massive knee that drops Diamond. He returns to his feet in pure zombie mode, and the two trade shots until the final bell.

BIG SHOT FROM LOUGHNANE, but Diamond ends up on top! pic.twitter.com/ov1PAOXk1j

I’m not sure what just happened there, and I’m also not sure if Loughnane or Diamond is even human. What. A. Fight.

We go to the judges’ scorecards ... and it’s a majority decision in favor of Loughnane.

A fitting result for that wild, back-and-forth affair. With that, Loughnane earns three points and officially punches his ticket to the 2021 PFL Playoffs.