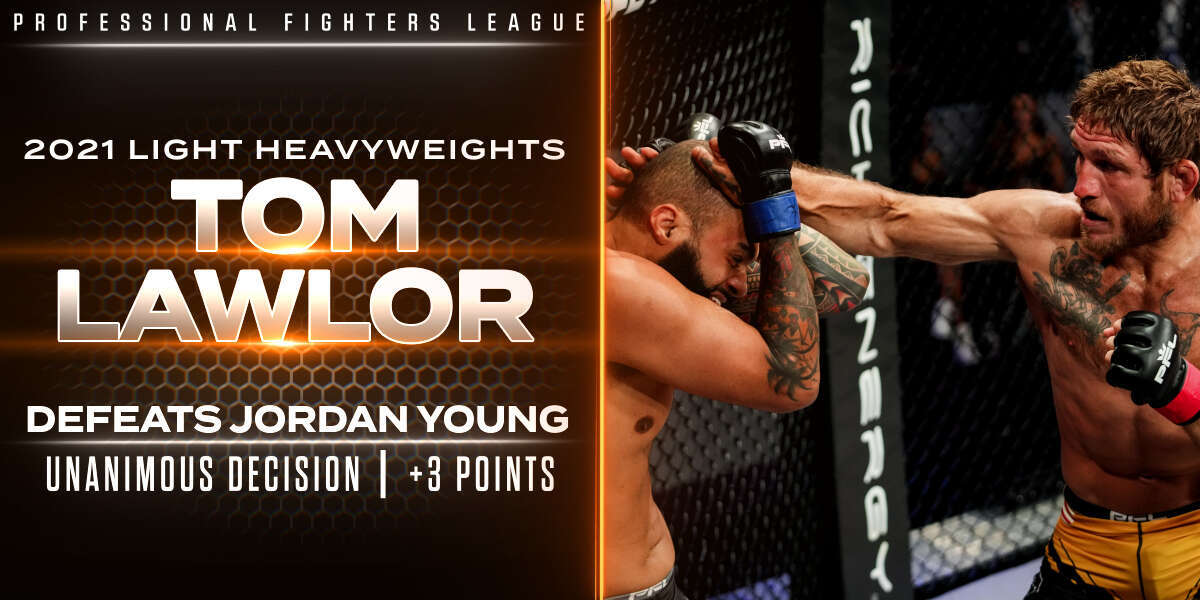 Previously, Young was scheduled to face Vinny Magalhaes at PFL 2, 2021, but Magalhaes missed weight and withdrew from the scrap, giving Young three points as he headed into the fight with Lawlor.

Lawlor, meanwhile, suffered a first-round submission defeat at the hands and squeeze of Antonio Carlos, Jr., at PFL 2, 2021, putting him in must-win mode against Young.

The two fighters touch gloves, and it’s Lawlor pressing forward early. Young lands an inside leg kick, but Lawlor catches it and plants his foe on his back immediately. Already, Young’s looking for a submission, working toward a triangle. Lawlor senses it well, counters, and passes. A scramble ensues, and Young works back to his feet.

Lawlor presses Young against the cage, and the two reverse position a few times before Lawlor rips a short uppercut that finds its mark. They separate, and Lawlor lands a nice combination on the break. Lawlor immediately gets in on Young’s legs once again, taking down his opponent while avoiding the high-elbow guillotine attempt in the process. It appears Lawlor is trying to set up an anaconda choke, but Young isn’t having it. He explodes, creating a scramble, and works back to his feet once more.

Two minutes left in the round, and it’s Lawlor pressuring Young against the fence. Foot stomps from Lawlor, but nothing much of note happening here. Lawlor breaks and looks for an overhand right, missing the mark, just before the bell.

Lawlor with a leg kick early, but Young answers with a body kick that lands. It’s Lawlor with the hands now, landing a solid combination before again initiating the clinch. Young separates quickly this time, breaking away and landing another body kick.

Lawlor’s in on a single, but Young sprawls and regroups, catching Lawlor in another guillotine. This time, Lawlor’s in trouble, and he rolls, giving up position but surviving and forcing Young to release the hold momentarily. Young’s working from side control, and Lawlor rolls to a turtle position before getting back to his feet. Nice composure from the veteran Lawlor there to survive and work back to safety.

Lawlor pushes forward with a powerful left and drops straight for the double-leg. He has Young down and immediately works to mount, where he sets up an arm-triangle choke. Young’s defending, but Lawlor’s relentless here. Young shows off some remarkable calm under fire, literally closing his eyes and waiting out the attempt until the bell saves him. Two close submission attempts that round — one from each fighter.

Young opens the round with a high kick. Lawlor’s strategy hasn’t changed. He pushes forward with strikes and clinches, looking for the takedown. One minute gone, and Young searches for the guillotine once more, giving Lawlor the opportunity he needed to drag him to the mat. He goes to work from Young’s half guard.

Young recovers full guard and immediately looks for the triangle, which Lawlor slips from almost instantly. Now, Lawlor goes to work from Young’s guard, landing a few short strikes while defending another triangle attempt. Lawlor advances to half guard and once again looks for the arm-triangle choke. Not happening, but Lawlor does move to side control before electing to move back into half guard. Almost immediately, Young recovers full guard.

Thirty seconds left, and it’s Lawlor on top, dictating the pace and the pressure. Not a ton of action, but it appears Lawlor’s done enough to lock down the decision victory.

The judges agree. Lawlor takes home the decision victory thanks to his three takedowns and 70-18 advantage in total strikes. He earns three points in the Light Heavyweight standings along with his first official PFL victory.

Lawlor, teary-eyed, removes his gloves and places them at the center of the cage — despite currently sitting in fourth place in the 2021 PFL Light Heavyweight standings, which would qualify him for the Playoffs. Keep an eye on this situation as it develops.