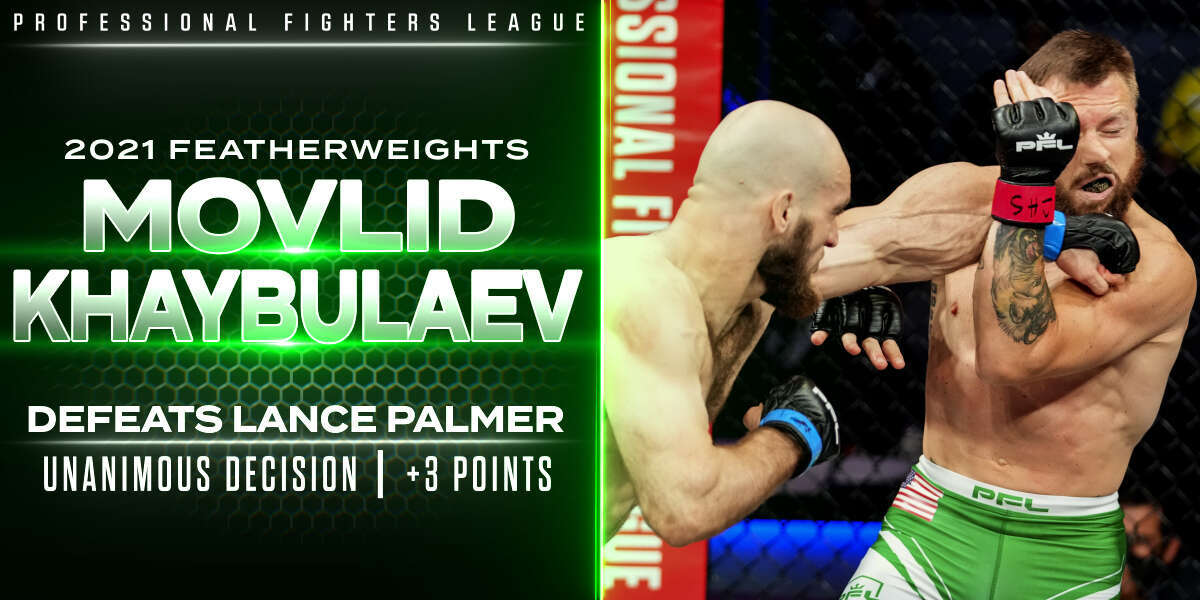 Palmer, the two-time PFL Featherweight champion, felt some serious pressure against Khaybulaev, desperately needing a big win if he wanted to qualify for the 2021 PFL Playoffs. Following a decision loss to Bubba Jenkins at PFL 1, 2021, Palmer needed to get back on track — but Khaybulaev wanted to spoil “The Party.”

Who got it done?

Both fighters look insanely quick and polished early, displaying all the skills you’d expect from top-level featherweights inside the cage.

Khaybulaev blitzes with a series of punches, and Palmer catches him on the way in, briefly putting him on his butt. It’s unclear whether that’s a slip or a legitimate knockdown, but Khaybulaev ended up on the ground nonetheless. He’s back to his feet, and he cracks Palmer with a left hook.

They return to range and close out the round striking in a relatively even, tactical contest.

Another quick start to the round, with both fighters opening up from range. Khaybulaev shoots and gets the takedown, turning the tables on the wrestler and putting him on his back. Palmer scrambles, but Khaybulaev is all over him, securing the seatbelt and maintaining pressure. He gets the body lock and takes Palmer for a ride for his second takedown of the round.

Palmer scrambles back to his feet, but Khaybulaev is all over him against the fence. With just over a minute left in the round, Palmer finally gets free, and he immediately cracks Khaybulaev with an overhand left. He needs a finish here if he wants to qualify for the Playoffs.

Khaybulaev flies in with a knee, but it’s not there, and Palmer catches him with another left. Spinning backfist from Khaybulaev misses. He follows that with a leg kick that lands on Palmer. Now, Palmer rushes in, and Khaybulaev catches him off balance.

Ten seconds to go, and Palmer lands a left hand, but it’s not quite enough. He’ll miss the Playoffs regardless of what happens in the final round.

While Palmer can’t make the Playoffs here, a victory still would push Khaybulaev out of contention and give the fourth and final seed at 145 to Sheymon Moraes.

They open up the round trading strikes, with Khaybulaev taking a conservative approach early on, staying at distance and relying on his movement and distance control to avoid anything major from Palmer. He knows a decision victory advances him to the Playoffs, and it looks like he’s content to let that happen.

Palmer rushes, but Khaybulaev makes him pay with a crisp combo of his own. Despite the more conservative approach, Khaybulaev looks phenomenal here in Round 3, landing at will and avoiding any serious punishment from Palmer.

On command, Palmer stuns Khaybulaev with a hard left and aggressively pushes forward. Khaybulaev fires right back with a flying knee and a hook that appears to hurt Palmer. He recovers quickly, though, and the two end the fight on the feet trading punches.

Palmer didn’t get the early finish — and he didn’t win at all. Khaybulaev takes the unanimous-decision victory and a spot in the PFL Featherweight standings as a result, pushing Moraes out of contention and solidifying the 145-pound bracket.

The win ties Khaybulaev with Bubba Jenkins at six points, and their seeding will be determined via coin flip at a later date. Brendan Loughnane secured the No. 1 spot and will face one of those two, while Chris Wade is at No. 2 and will face the other.