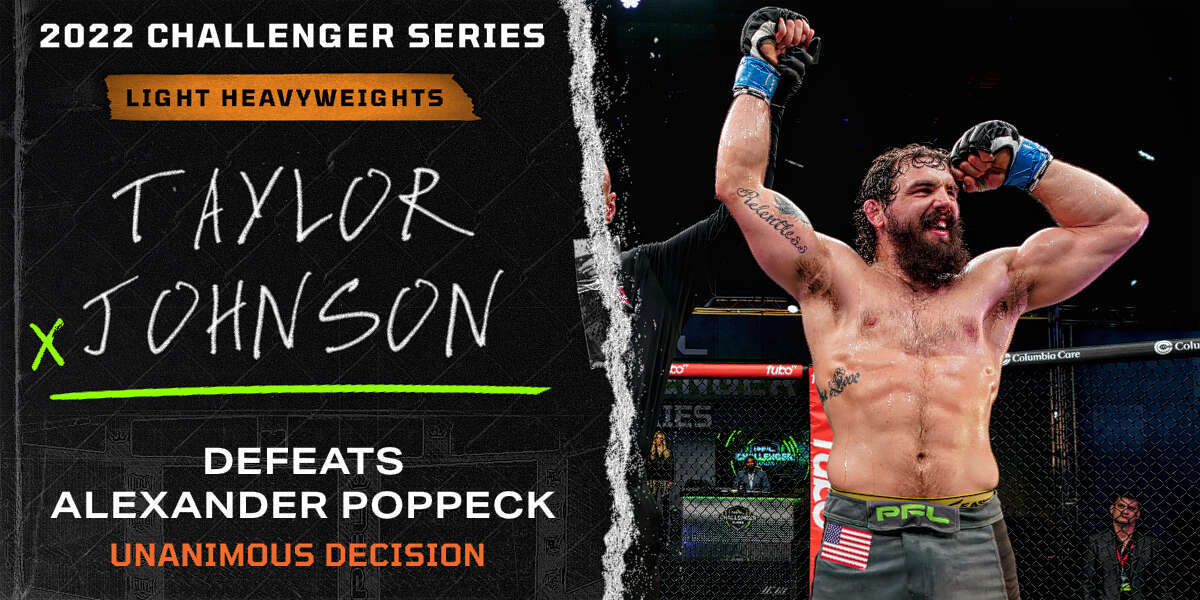 The 2022 PFL Challenger Series continued Friday evening with its third fight of the night: Alexander Poppeck (12-3) vs. Taylor Johnson (7-3).

Germany’s Poppeck has earned seven of his 12 wins via knockout (five in the first round), while the United States’ Johnson has finished all seven of his professional wins to date (five knockouts, two submissions).

You just get the feeling someone is going down in this one, eh?

A touch of the gloves opens the action. Both men look extremely calm here, with Poppeck stalking from range. Big left hand sets up the shot for Johnson, and Poppeck’s on his back just like that.

If the goal for Johnson was to get this fight to the ground, consider that mission accomplished 30 seconds into Round 1.

Poppeck wisely uses the fence to stand, but Johnson’s clinging to the body lock against the cage. Not much happening here, and the referee separates them.

No doubt Poppeck is pleased with that decision, as he immediately gets to work with a nice series of leg kicks. Another nice kick, this time to the body, from Poppeck.

Uppercut from Poppeck gets Johnson’s attention, and now he fires back with a few kicks of his own. Johnson again looks to close the distance with punches, but Poppeck smartly evades and circles away as Round 1 comes to a close.

They’re back after it, Poppeck gauging a high kick early. It misses, and Johnson presses forward, landing a body kick in the process. Both men look a little more active on the feet early here, clearly sensing the need to take over the fight.

Poppeck initially shrugs it off, but Johnson re-shoots, and it’s successful. Just like in the first round, however, Poppeck utilizes the cage to get back to his feet, and they’re circling once more.

Slowly, Poppeck’s taken control of the standup portion of this fight. He’s landing with both more power and more volume, keeping Johnson guessing and looking for counters instead of imposing his own game.

Twenty seconds left in the round. Johnson scores with a heavy combination of punches, and he shoots for a takedown. It’s not there, and the round ends with the two pressed against the fence.

Johnson’s aggressive to start it, closing the distance and looking for the finish with big power shots. None lands solidly, but a kick glances low, forcing a brief stoppage.

Poppeck’s OK, and they’re back at it.

A huge left hand connects for Johnson, planting Poppeck on his butt. He pops right back to his feet and shoots a takedown of his own. Johnson isn’t having it, though, and he counters with a gorgeous throw, landing right in mount.

That lasts just a moment, though, as Poppeck uses the momentum to scramble to half guard. What a sequence there.

Johnson’s working from the top, but Poppeck’s defending well, avoiding any serious punishment while working his way to the cage in an attempt to stand.

The round comes to a close with Johnson dominating the grappling exchanges, briefly taking Poppeck’s back before threatening an arm-triangle from mount as well.

Strong finish from the American there. We’re off to the judges’ scorecards.

This one felt like two rounds for Johnson (one and three) vs. one round for Poppeck (Round 2).

And the judges agreed.