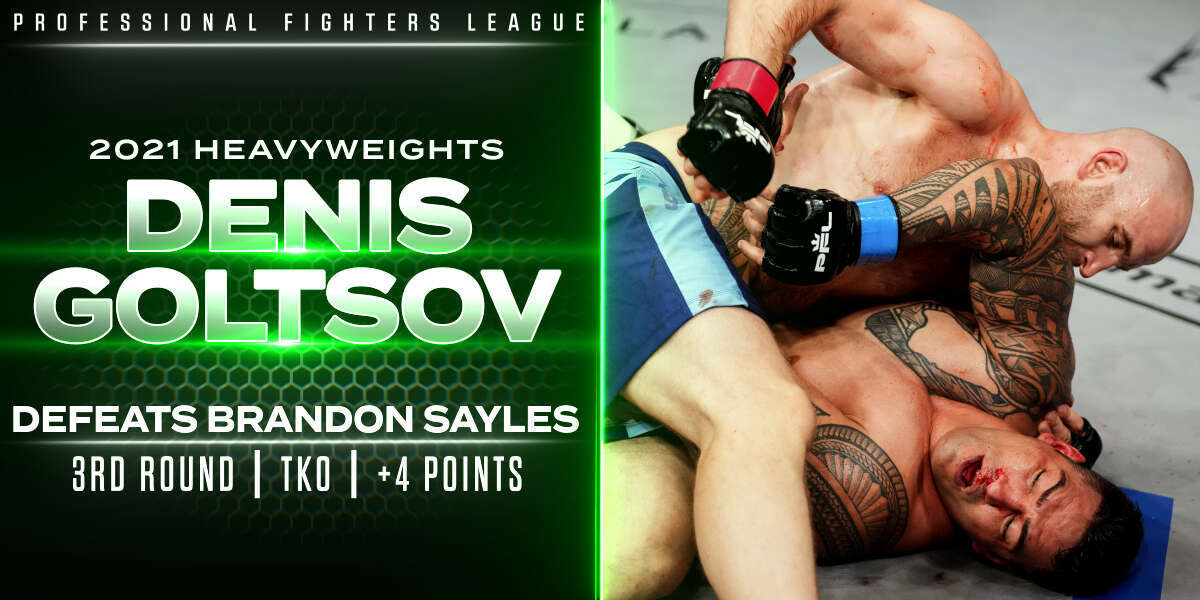 Goltsov finishes strong vs. Sayles, earns No. 2 seed in Playoffs

Entering the bout with six and five points, respectively, Goltsov and Sayles each impressed in their first-round matchups at PFL 3, 2021 in May. With a logjam atop the Heavyweight standings, however, neither man could simply coast to victory, making this an intriguing matchup on all levels.

In fact, Sayles needed to win outright to qualify for the Playoffs despite his second-round victory at PFL 3, 2021. Could he topple Goltsov?

Here’s how it played out:

A touch of the gloves gets us started, and Sayles immediately fires a leg kick. Goltsov returns the favor and follows with a stiff jab. Another leg kick from Sayles, who follows it with a left hook but eats a leg kick for his efforts.

Another jab from Goltsov finds its home, followed by another. That’s looking sharp early. Sayles with a front kick, but it glances off Goltsov. Big overhand right followed by a lightning left hook from Sayles, but neither punch finds Goltsov’s chin.

Sayles continues to push forward, making Goltsov fight moving backward. The jab from Goltsov caused some visible damage on Sayles already, as he’s bleeding from the nose/mouth area. Lunging left hook from Sayles misses, and Goltsov makes him pay with another leg kick.

With a minute left in the round, Goltsov shoots, but Sayles stuffs it and forces his opponent against the cage. They work in the clinch, and Goltsov hits a beautiful trip, landing on top of Sayles and immediately looking for an Ezekiel choke. Not enough time, though, and the round ends.

Fighter Performance Rating gives Golstov Round 1 with a 59-39 edge over Sayles. That feels correct, as he worked well behind the jab and scored the late takedown.

Round 2 begins, and they’re aggressive early, Golstov landing two high kicks. A strong left lands behind the ear of Sayles, and Goltsov’s finding his groove. They clinch, and Goltsov trips Sayles, immediately transitioning to mount and setting up another Ezekiel choke attempt.

Sayles squirms, and it’s just enough to prevent the submission, as Goltsov has to let go and re-establish position. That’s short-lived, though, as Goltsov is right back on the Ezekiel, and Sayles once again bucks and essentially bench-presses his way to safety. Wild.

Third time’s a charm? Goltsov is back searching for the Ezekiel, but he abandons it quickly this time. He instead steps to side control and moves to north-south, looking for a D’arce. Sayles slips out immediately, and now he’s on top, working from side control with 20 seconds to go.

There’s no time for him to mount any significant offense, though, and the bell ends, sending us to the third and final frame.

Sayles looks tired here as the third round opens. He’s moving slowly, and Goltsov senses it, cracking him with a hard right to start Round 3. Another right, followed by a high kick, and Sayles is in trouble. They clinch against the fence, and Goltsov gets the fight back to the mat.

He hammers away with brutal ground-and-pound, and the referee is forced to intervene. Sayles showed heart and toughness, but that wasn’t enough tonight against Goltsov.

Four points and the No. 2 seed in the Playoffs goes to Goltsov, who earns his second-straight finish inside the PFL cage. With the loss, Sayles is eliminated from Playoff contention, and Jamelle Jones will take the fourth and final spot with his six-point performance earlier Friday evening.

It will be Goltsov vs. Ante Delija and Bruno Cappelozza vs. Jamelle Jones in the Heavyweight semifinals Aug. 27.