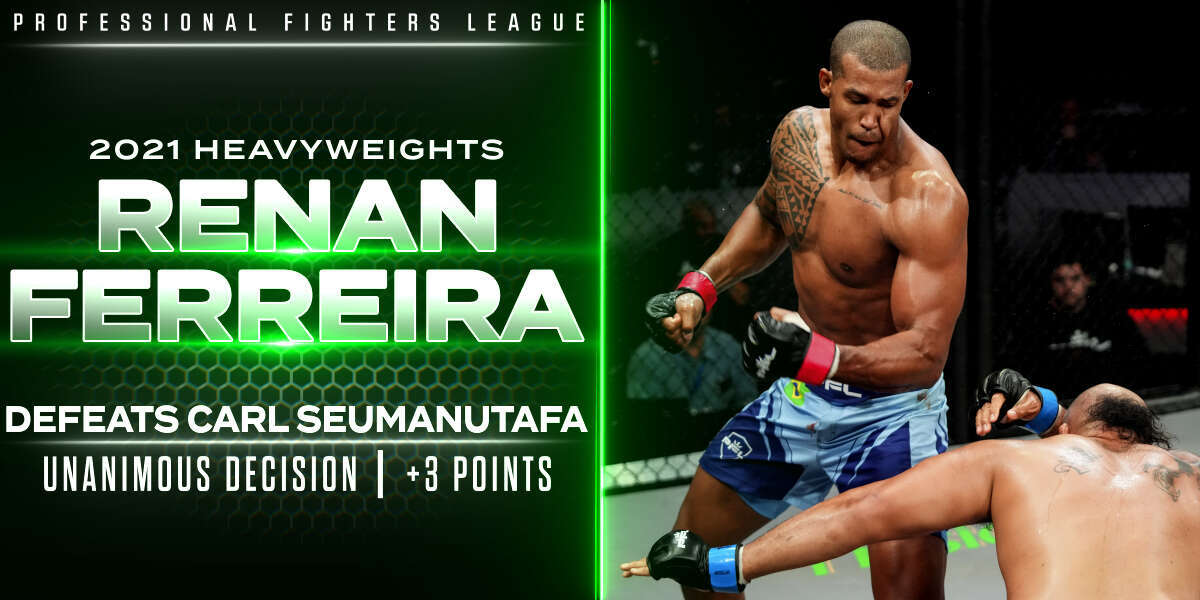 After back-to-back scraps in the Women’s Lightweight division, PFL 6, 2021 turned back to the big boys with a Heavyweight throwdown between Renan Ferreira and Carl Seumanutafa.

Ferreira most recently defeated Fabricio Werdum at PFL 3, 2021 via first-round TKO, only to have that result overturned to a no-contest. In that fight, Werdum caught Ferreira in a triangle choke that seemingly forced him to tap out. While the referee didn’t stop the fight, Werdum asserted he felt the tap and released the submission, allowing Ferreira the opportunity he needed to strike his way to the TKO finish.

Against Seumanutafa, Ferreira looked to bounce back and notch a win inside the PFL cage — for real this time.

No touch of the gloves here. Both fighters feel out the action from range early, with Ferreira feinting before throwing a front kick that narrowly misses the mark. A heavy calf kick lands from the Brazilian, and Seumanutafa shoots for a takedown.

Ferreira counters it beautifully, first with an uppercut and then with some strong hips, reversing position and winding up on top, throwing hammerfists to the head alongside brutal shots to the body.

Midway through the round, and it’s all Ferreira. He’s repeatedly landing heavy ground-and-pound, and Seumanutafa has no answers. He’s doing well to move and avoid being finished, but he can’t escape, and he can’t stifle the attack from Ferreira thus far.

Seumanutafa works his way back toward the cage, pressing his back against the fence. He creates space momentarily but Ferreira pounces on his neck and punishes him with more ground-and-pound. The round ends there. All Ferreira early.

To this point, Ferreira has landed 84 of his 86 attempted strikes, a wildly efficient display of dominance. Ferreira now looks for an Ezekiel choke, but it’s not there. Seumanutafa tells referee Keith Peterson he’s OK, and Ferreira continues to work from the top.

Ferreira continues to land heavy ground-and-pound, and he senses an opening, going for the arm-triangle choke. It looks tight, but Seumanutafa repeatedly gives the thumbs up, drawing chuckles from the commentary crew. Ferreira gives up the attempt and transitions back to mount, finishing the round with — you guessed it — more ground-and-pound.

Credit to Seumanutafa here: He doesn’t seem shook or discouraged or anything of the sort. Ferreira is having his way everywhere the fight goes, but Seumanutafa is still here, and he still looks ready to finish strong.

They touch gloves this time, and Ferreira goes for a switch kick, showcasing impressive athleticism, especially at 6-foot-8. Seumanutafa ducks it, but hey, style points and all.

Now, Seumanutafa bullies Ferreira against the cage and elevates, slamming his foe to the canvas — by far his best offense of the fight. Seumanutafa wants to inflict damage from the top, but Ferreira works to the cage, pressing his back against the fence. Not much happening here, as Seumanutafa maintains top pressure to prevent Ferreira from wall-walking.

With 10 seconds to go, Ferreira scrambles to his feet and throws a flying knee, but it doesn’t land, and we’re off to the judges’ scorecards.

It’s a dominant decision victory for Ferreira — but that’s not enough. All three judges see it 30-26 for the Brazilian, and he earns three points with the victory, giving him four of the season and putting him just out of the PFL Playoffs after Jamelle Jones’ first-round finish earlier at PFL 6, 2021. It’s a season, not one fight, and Ferreira came up just short.