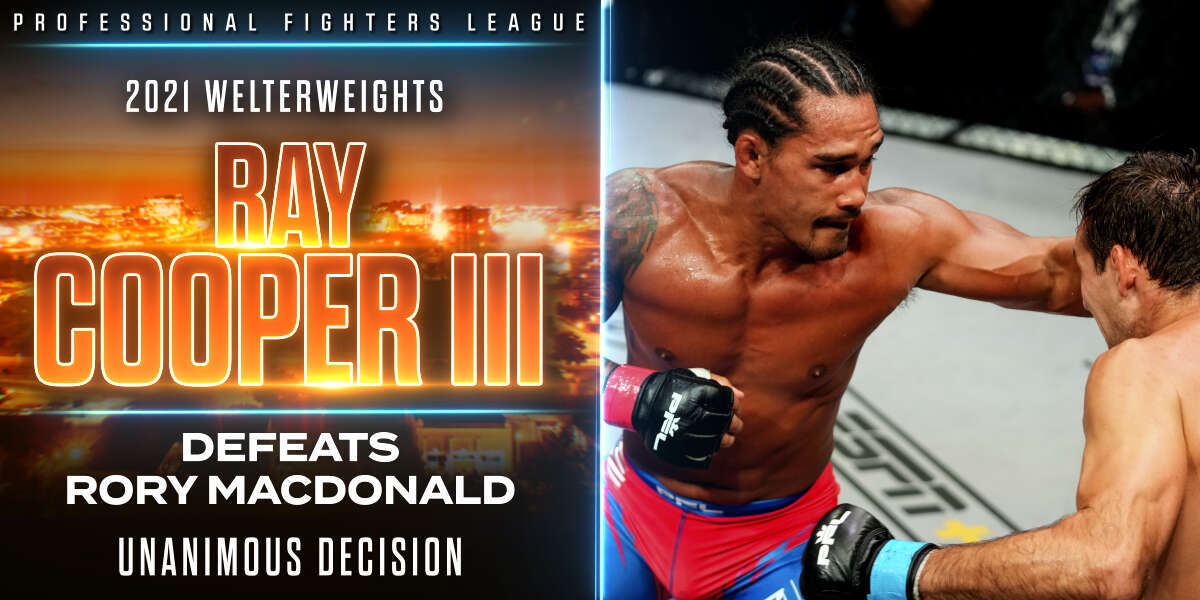 With Magomed Magomedkerimov securing a spot in the Welterweight Finals one fight earlier on the card, the No. 2 seed MacDonald and the No. 3 seed Cooper scrapped it out for the final position in the 2021 PFL World Championship at 170 pounds.

Cooper’s out of the gates aggressively (surprise!), and MacDonald pumps the jab to keep his opponent at bay. Cooper closes the distance, and MacDonald snatches a single leg, eventually forcing Cooper against the fence. They clinch here, with MacDonald landing some short inside knees and shoulder strikes.

Two minutes into the round, MacDonald continues to dictate the pace by holding Cooper against the cage. Cooper attempts a trip which knocks MacDonald off balance briefly, and he lands a knee as MacDonald re-establishes position. Now it’s Cooper dropping for a single, and MacDonald defends well, but Cooper re-enters and gets it, dumping MacDonald on his back and going to work from top position.

Cooper works from half guard as MacDonald attempts to get his back to the cage and work back to the feet. Now Cooper’s looking for the arm triangle, and it’s tight but he can’t quite get to the angle he needs due to the fence. With 10 seconds to go, MacDonald simply hangs on and survives.

Ray Cooper III ends the 1st round with Rory locked up in a choke! Was it enough to win the round?#PFLPlayoffs LIVE NOW
🇺🇸 ESPN+ & ESPN2
🌍 https://t.co/WfOt9XBfzk pic.twitter.com/hc5UguL1Vl

Cooper’s out quickly again, and he dumps MacDonald on his back immediately. He’s on top once again with 4:30 to work. Cooper’s working from half guard, but not much of significance is happening here, and referee Gary Copeland notices and stands them up.

With 1:30 to go in the round, they’re back on the feet, and Cooper presses forward aggressively once more, dumping MacDonald back to the mat. MacDonald appears to be setting up the early stages of a triangle choke from the bottom, but there’s nothing there, and Cooper hammers away with shots from the top as the round comes to a close.

They come out swingin’, with Cooper getting the better of the exchanges. MacDonald notices and shoots, but Cooper latches onto the neck and forces MacDonald to his back.

MacDonald looks for the armbar, but Cooper shuts it down quickly, stacking his opponent and avoiding any damage. Cooper returns to half guard, and MacDonald once again looks to snatch an arm, this time via kimura. Again, Cooper closes that window of opportunity and goes back to work from the top.

One minute to go in the fight, and Cooper has MacDonald pressed against the cage, working from top position. Referee Gary Copeland stands them up with 12 seconds to go, and they trade blows, but nothing of significance finds the mark. This one’s a wrap, and Cooper appears to have wrestled his way into the PFL World Championship.

The judges had an easy job in this one, as Cooper controlled the action and maintained top position for the vast majority of the fight.

For his efforts, he takes home the unanimous decision victory and punches his ticket to face Magomed Magomedkerimov in the PFL World Championship. Will he repeat as PFL World Champion and add another cool $1 million to his bank account?

We will  find out Oct. 27 at the 2021 PFL World Championship at Seminole Hard Rock Hotel & Casino.