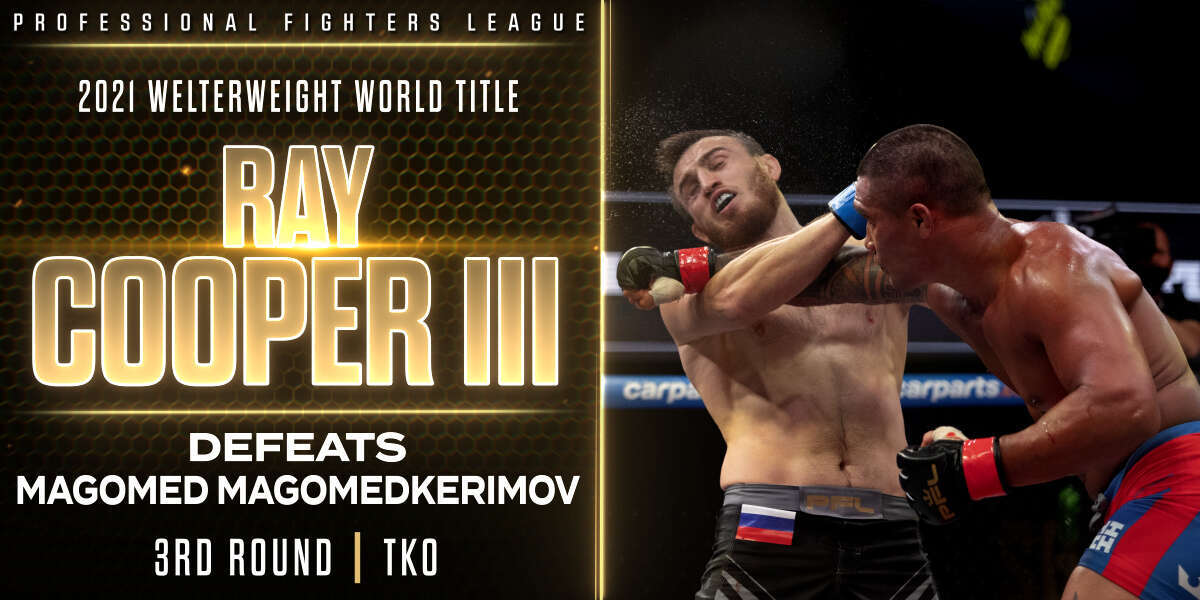 Oh yes. It doesn’t get much better than this.

Two of the best fighters in PFL history clashed in the co-main event of the 2021 PFL World Championship Wednesday evening, as Ray Cooper III faced Magomed Magomedkerimov in a welterweight title showdown.

Magomedkerimov won the promotion’s inaugural welterweight finals in 2018, defeating Cooper via second-round guillotine. He couldn’t defend his title in 2019, however, as he was forced out of competition with an injury. That gave Cooper the chance to step in and step up, and that’s exactly what he did, winning PFL gold in 2019 with an impressive title run that saw him knock out back-to-back opponents in the semifinals and finals.

Now, one of these two men will leave the SmartCage with his second PFL title –– and his second $1 million check. Who will it be?

The main event is LIVE NOW on ESPN & ESPN+!#PFLPlayoffs pic.twitter.com/BhMvbkCjSr

Cooper pushes forward behind his jab early, and Magomedkerimov digs a heavy leg kick into Cooper’s lead leg. Another kick from Magomedkerimov catches Cooper low, and there’s a brief pause in the action.

After the restart, Magomedkerimov presses forward and get the body lock, taking Cooper to the mat. Cooper ties up nicely, negating any major damage, as Magomedkerimov searches for his signature Ezekiel choke. Cooper, wise to it, shuts it down before it gets close.

Magomed gets the takedown with plenty of time left in the 1st round!#PFLChampionship LIVE NOW
🇺🇸 ESPN2 & ESPN
🌍 https://t.co/WfOt9XBfzk pic.twitter.com/S0jQvsLOcj

They stand with 1:15 to go in the opening frame. Magomedkerimov lands a nice right hand but lunges forward and nearly eats a massive counter from Cooper in the process. Cooper’s double jab finds a home, but Magomedkerimov is keeping him guessing with a variety of kicks, punches, and feints.

The round ends with Cooper stalking Magomedkerimov around the cage.

Possibly feeling a sense of deja vu, Cooper calmly works Magomedkerimov to the fence, escapes, and then works to finish his takedown without falling into a submission in the process. He gets it, and Magomedkerimov immediately gets to work on the bottom.

Cooper, however, looks composed here, and he’s avoiding any serious danger. He begins to open up with some big shots from the top, and the crowd comes to life as he moves into half guard.

Now, Cooper’s looking for the arm-triangle, but Magomedkerimov defends. The round ends with Cooper on top, controlling the fight from that position.

Magomedkerimov lands a massive right hand 50 seconds into the round, getting Cooper’s attention. Immediately, Cooper turns to his wrestling, but he’s unable to get the fight to the ground.

Magomedkerimov separates, and he’s back to slinging heavy leather, landing at will on Cooper. While Cooper looks to counter, Magomedkerimov remains just out of range, avoiding any return punishment.

Cooper looks winded, injured, or both here, and Magomedkerimov notices as he lands yet another big right hand. The momentum is fully on Magomedkerimov’s side here as he continues to wear down Cooper.

And just like that, Cooper is suddenly not just OK but $1 million richer.

Out of nowhere, he explodes, flattening Magomedkerimov with a series of powerful punches. The first right hand stung him, the second one put him down, and some follow-up ground-and-pound put Magomedkerimov out for good.

Just as it seemed Magomedkerimov would run away with the fight, Cooper showcased his game-changing power, flattening Magomedkerimov and getting revenge for that 2018 PFL Finals showdown.

The knockout marks Magomedkerimov’s first loss under the PFL banner and snaps a 13-fight winning streak.

With the win, Cooper becomes a two-time PFL Welterweight World Champion and further cements himself as one of the most dangerous 170-pound fighters on Earth.