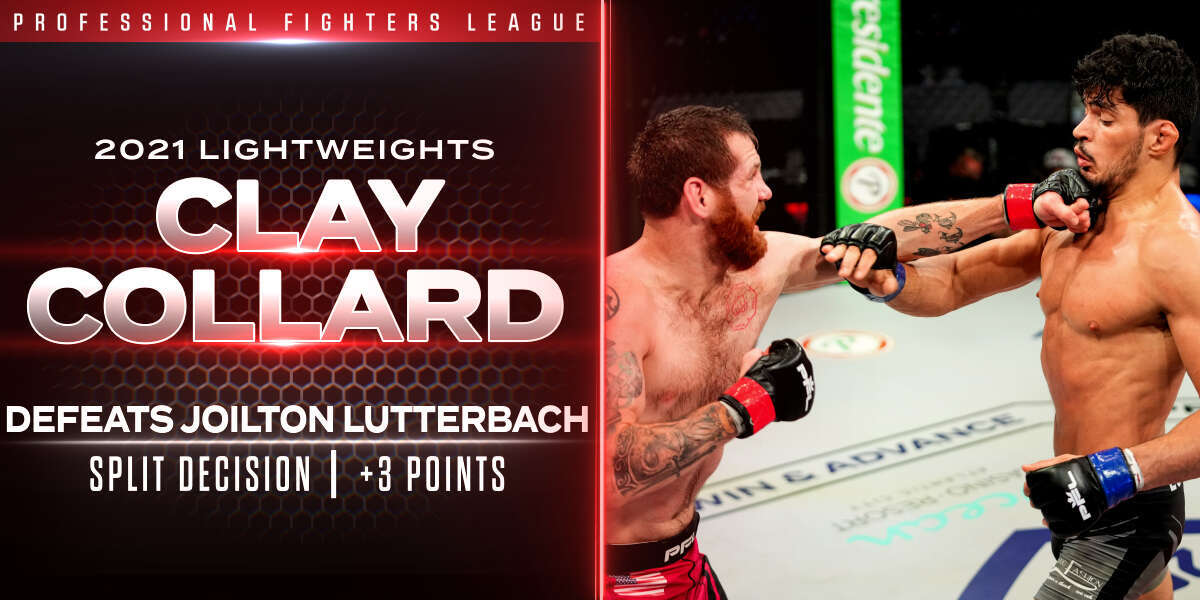 Clay Collard found himself in the driver’s seat heading into this PFL 4, 2021 throwdown against 44-fight veteran Joilton Lutterbach. By upsetting former UFC champion Anthony Pettis back at PFL 1, 2021, in April, Collard registered three points in the 155-pound standings and set himself up for a spot in the Playoffs.

Then, Lutterbach missed weight ahead of PFL 4, 2021, guaranteeing Collard another three points by night’s end. With that, Collard could have played it safe and cruised to victory, knowing his opponent had already been deducted a point and could not earn any points in the matchup.

He didn’t. Here’s what happened.

Gary Copeland claps his hands, and we’re off here in the PFL Lightweight division. Collards eats a leg kick from Lutterbach early but presses forward and threatens with punches early. Lutterbach times Collard’s advance perfectly, securing the counter takedown and going to work from Collard’s guard.

Collard sees an opening and explodes, but Lutterbach pounces on a power guillotine, and it’s tight. He flips Collard while hanging onto the choke, and just as the end appears near, Collard slips out of the submission and returns to his feet. He punishes Lutterbach with a body kick and a flurry of hard punches for his troubles. Unfazed, Lutterbach notches another takedown, but Collard is able to avoid any punishment this time and return to his feet. Clinging to a body lock, Lutterbach again drags Collard to the mat with just under a minute to go in the round.

Collard pumps a jab quickly in Round 2, attempting to regain some control. Lutterbach clinches and Collard shrugs it off, but Lutterbach returns immediately with a double-leg shot that puts Collard on the canvas. This time, Collard bounces back to his feet and stalks his opponent around the cage. A nice counter knee seems to land, but Collard eats it well and continues pressing forward.

Another takedown attempt from Lutterbach misses the mark, and Collard punishes him with strong kicks to the body. Lutterbach returns to his feet, and they exchange blows along the perimeter of the cage. Now, Collard presses forward for the clinch, and they separate, where Collard lands a strong left hand. Another exchange, and Collard again lands a crispy combo with the hands, putting Lutterbach on his heels for a moment.

A beautiful toss from Lutterbach puts an end to that offense, but Collard pops to his feet once more. After some brief exchanges, Lutterbach shoots again and this time is able to plant Collard on his back. Collard counters with a kimura, hoping to find the finish with 30 seconds remaining in the round.

Collard returns to his feet while fighting off a front choke, and the round ends.

With Round 1 likely going to Lutterbach and Round 2 looking razor-thin, both fighters come out swinging in Round 3. Lutterbach attempts to bait Collard to the ground, but the American isn’t having it, instead opting to play out the fight on the feet.

Back to his hunting ways, Collard presses forward, and Lutterbach continues to look for the takedown. Two failed attempts later, they strike at a distance, and Collard cracks Lutterbach with a hard punch. Showcasing his beard, Lutterbach shakes it off and takes down Collard, winding up in his opponent’s full guard.

Collard goes to work with slaps from the bottom, using his arms to generate space to get back to his feet against the cage. Lutterbach clinches, and Collard drops for a kneebar, but Lutterbach defends and elevates Collard for a massive, Matt-Hughes-style slam. Collard looks for a kimura, but it’s not there, and the time expires on the fight.

To the judges’ scorecards we go.

Lutterbach scored eight takedowns to Collard’s zero throughout the fight, but two out of three judges didn’t think that was enough, giving Collard the unanimous decision victory.

With six points after the victory, Collard clinches a spot in the 2021 PFL Playoffs.