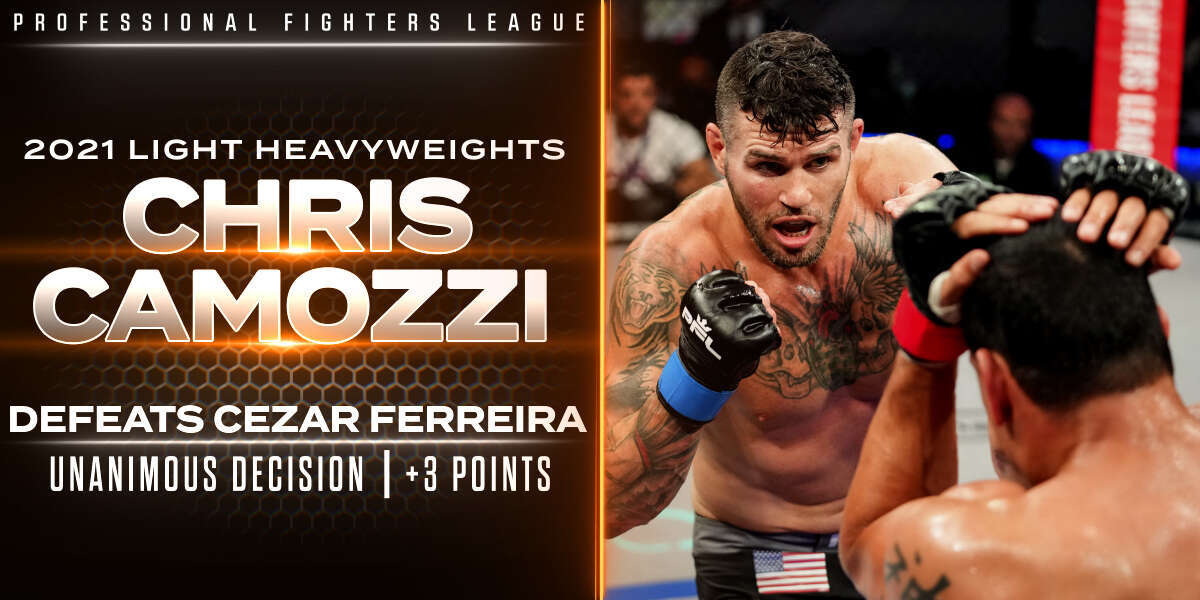 Camozzi endures rough first round, storms back for decision victory vs. Ferreira

The PFL 5, 2021 main card kicked off on ESPN2 Thursday evening at Ocean Casino Resort in Atlantic City, N.J., with a Light Heavyweight scrap between a pair of UFC veterans in Cezar Ferreira and Chris Camozzi.

The two combatants entered the fight in polar-opposite positions, as Ferreira enjoyed full control of his destiny in the PFL Playoffs picture thanks to a first-round knockout of Nick Roehrick at PFL 2, 2021 on April 29. With that, he earned six points, and any victory against Camozzi would propel him into postseason action.

Camozzi, meanwhile, dropped a unanimous decision against Emiliano Sordi at that event, putting him in a win-or-go-home situation against Ferreira at PFL 5, 2021.

Could he get it done and squeak into the Playoffs?

Camozzi takes the center of the cage and puts Ferreira on his heels early. Ferreira lands the first strike of the fight, a low kick. The two trade low calf kicks, and it appears Ferreira’s are effective already, getting a reaction from Camozzi.

Ferreira drops for the blast double and gets it, putting Camozzi on his back early with almost four minutes to work. Camozzi does well to stifle any significant offense from Ferreira, but the Brazilian manages to land some ground and pound and work from the top nonetheless.

Camozzi scrambles, and Ferreira threatens with a front choke. The submission isn’t there, but he wisely uses the position to control Camozzi’s posture, landing some knees to the shoulder in the process. They stand to close out the final 10 seconds of the round. Camozzi lands a series of three rights to Ferreira’s face, but it’s not enough to close the show. They go to Round 2.

Nice low kick from Ferreira opens the round, and Camozzi pays him back with a flurry of punches. It seems Camozzi is feeling the urgency in this round, and he’s clearly more aggressive and opening up with a variety of strikes as he forces Ferreira backward.

Content to counter, Ferriera allows Camozzi to strike first in these exchanges. A beautiful body shot followed b excellent head movement from Camozzi and a crisp left drops Ferreira. He jumps into his opponent’s guard to try to finish the job, but Ferreira ties him up well.

Camozzi imposes his will and lands some ground-and-pound here, but Ferreira isn’t in danger and appears to have entered full defensive mode, controlling Camozzi’s posture and avoiding major punishment.

An armbar attempt from Ferreira is easily shrugged off by Camozzi, and he finishes the round on top. Dominant comeback round for the American there.

Camozzi opens the round with a low calf kick and follows up with a double jab. Ferreira wants the low single, but Camozzi makes him pay with a guillotine attempt. Ferreira drops to his back, and Camozzi releases the hold. The two spring back to their feet in short order.

Now, Camozzi looks like the much fresher fighter, and he’s setting up combos nicely on his opponent. Ferreira, meanwhile, is largely throwing one shot at a time, looking for the home run. The Brazilian shoots a takedown, but Camozzi counters and winds up on top after a scramble. He goes to work from half guard.

After some brief work, they stand once more, and Camozzi still looks smooth in the stand-up department. He lands shots to the body and legs of Ferreira, forcing his opponent to work off the back foot.

All three judges saw the fight for Camozzi, who fired back with a polished, effective attack after a rough first round against Ferreira. One judge gave Camozzi a 10-8 for his efforts in Round 2, but the verdict remained the same. Camozzi wins and takes home three points.

Unfortunately for Camozzi, the PFL Playoffs are still out of reach, while Ferreira qualifies with his six points. The result also sends Marthin Hamlet (five points) into the Playoffs despite his loss to Cory Hendricks earlier on the PFL 5, 2021 fight card.