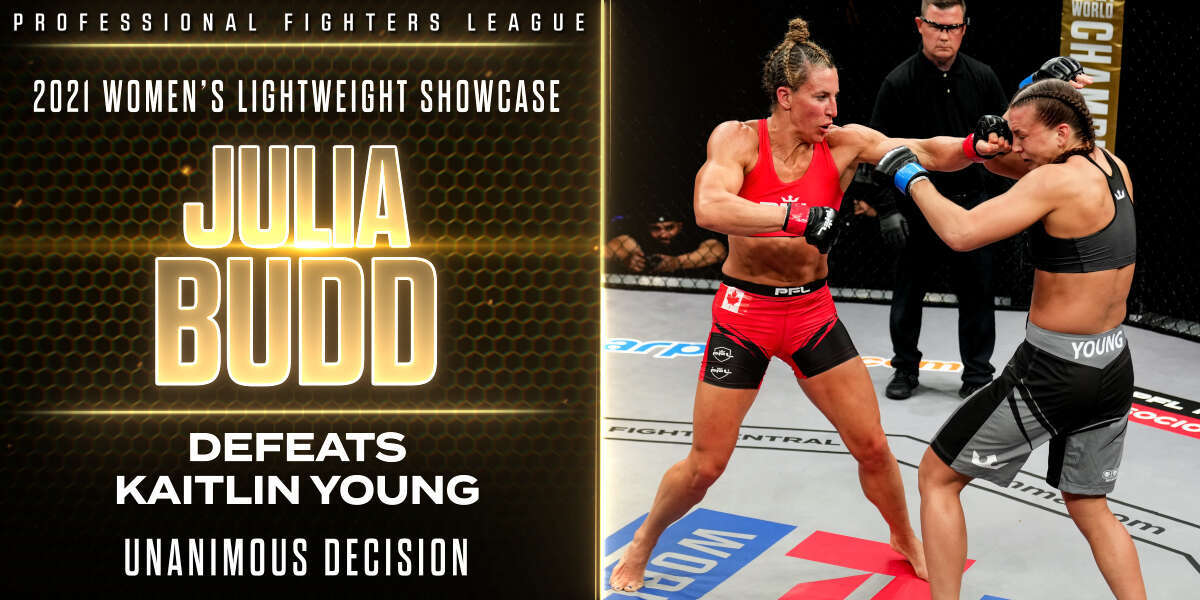 Julia Budd, one of PFL’s most highly anticipated new signings, made her promotional debut Wednesday evening against Kaitlin Young at the 2021 PFL World Championship.

With Kayla Harrison headlining the event against Taylor Guardado for $1 million and the PFL women’s lightweight title, Budd strolled into the cage with plenty of excitement and expectations.

Would she establish herself as a contender for the title in 2022, or would Young halt the hype train in its tracks?

Here’s what happened inside the Seminole Hard Rock Hotel & Casino.

Immediately, they clinch, and both women land nice knees on the inside. They separate, and Young looks to establish the jab before finding a home for the left body kick.

Jab-kick combo from Young lands, and Budd is looking reactionary thus far. She’s just a step behind Young, who is moving nicely and getting out of range after throwing. Outside leg kick from young lands, and Budd barrels forward, initiating the Thai clinch. Some dirty boxing ensues, then they separate.

Strong lead left hook from Young lands and appears to rock Budd. She recovers quickly, but that was by far the most damaging blow of the night.

With a minute left in the round, Budd shoots a double-leg and gets it, planting Young on the mat. Perfectly timed from the former Bellator star. Budd passes to half guard briefly, but Young recovers full guard almost immediately.

They close out the round there, and we’re off to Round 2.

ITS OVER! Kayla Harrison is heading back to the #PFLChampionship!#PFLPlayoffs pic.twitter.com/0TYzpC53M2

Budd opens the round with a series of push kicks, and they re-engage in the Thai clinch. Two solid shots from Young land, and they separate.

Young steps forward to throw a combo, but Budd counters beautifully, landing a strong right hand that catches Young’s attention. Low kick-straight right lands for Young as she looks to re-establish her rhythm and control the pace of the fight.

Budd just misses with a knee then comes forward with a series of punches. Young ducks beautifully and gets the body lock, taking Budd to the mat.

Young immediately gets to work, searching for the armbar, but she loses position and Budd capitalizes, reversing her foe and winding up on top, the two pressed against the cage.

One minute to go in the round, and Budd maintains position from the top, working from half-guard. Young has avoided any major damage, but there’s little doubt she’s losing the round so long as she’s on her back.

Budd chips away, and the round ends.

Budd wastes no time in Round 3 looking for the takedown, shooting just 20 seconds into the final frame. Young sprawls perfectly to avoid the initial attempt, but Budd is relentless and she powers through to complete the takedown.

She goes to work from full guard with four minutes to go. Young throws up an armbar attempt, but it’s not there, and Budd passes to side control after shrugging off the submission attempt. That was short-lived however, as Young recovers full guard almost immediately.

Two minutes to go, and Budd’s working from half-guard. Heavy pressure from Budd on the top here, as it appears she’s looking for a choke. It’s not a full Ezekiel attempt, but Young is clearly uncomfortable, and Budd uses the opportunity to advance to mount.

She locks in an arm triangle and slips to side control just as time expires.

Julia Budd ends the 3rd round with a submission attempt! We go to the judge's scorecards...#PFLChampionship LIVE NOW
🇺🇸 ESPN+
🌍 https://t.co/WfOt9XBfzk pic.twitter.com/E0eGRhq5k6

That’s a wrap. We’re off to the judges.

Budd landed 86/117 total strikes to Young’s 47/71 while mixing in two takedowns and some heavy top pressure in Round 3 specifically, giving the judges all they needed to make their decision.

It’s a successful PFL debut for Budd, as she takes the fight on all three scorecards.