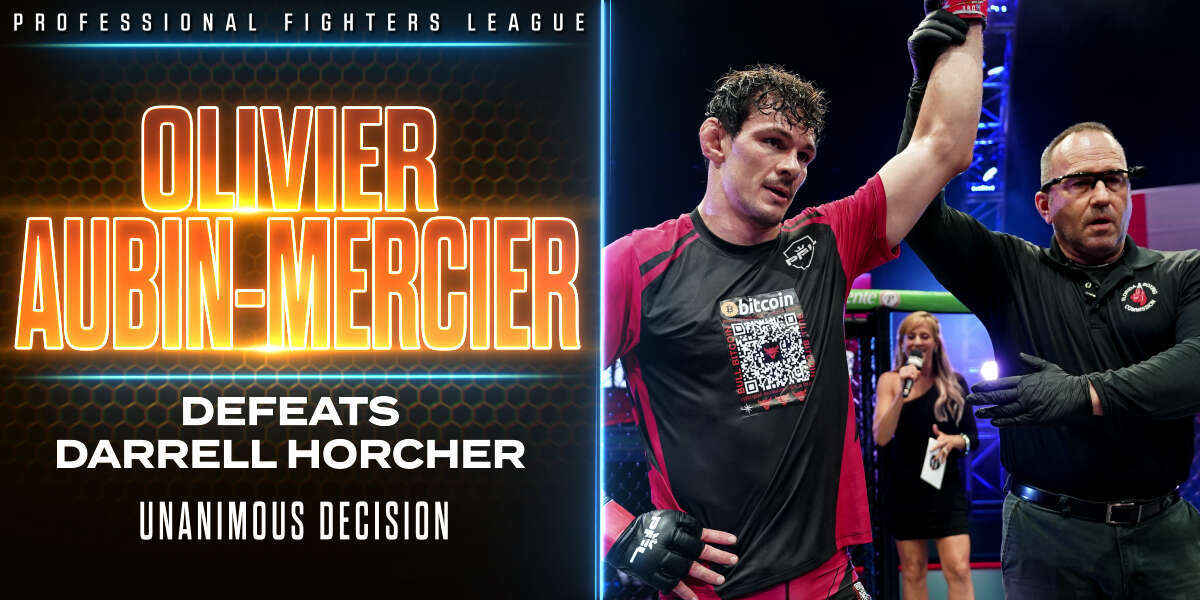 Both fighters left the UFC on losing streaks but bounced back impressively. Aubin-Mercier earned a dominant decision victory over Marcin Held at PFL 4, 2021 in June, while Horcher knocked out Vadim Ogar at CFFC 91 in December of 2020.

Friday, Horcher made his PFL debut, and Aubin-Mercier represented a stiff task in that inaugural scrap. Could he snag the victory?

They touch gloves, and it’s game on. Aubin-Mercier goes to work early with the leg kicks, and they’re finding their mark, putting Horcher on his heels and staggering him. Now, Horcher begins to check the leg kicks well, raising his lead leg in anticipation.

Horcher takes the center of the cage and pushes Aubin-Mercier backward toward the cage, firing away with powerful shots. The Canadian fires back, though, clipping Horcher on the end of a crisp right hand.

Two minutes remain in Round 1, and Horcher returns to the center of the cage. Aubin-Mercier looks for the leg kick, but Horcher counters beautifully, rushing in and landing a left hand that collapses Aubin-Mercier.

Horcher Blitzes OAM and gets a Knockdown in the first round! OAM Survives!#PFLPlayoffs LIVE NOW
🇺🇸 ESPN+
🌍 https://t.co/WfOt9XBfzk pic.twitter.com/oARKv4nJ6U

Somehow, Aubin-Mercier recovers almost instantly, and he’s back to his feet, pushing Horcher against the fence and securing a takedown. What a shift of momentum there.

The round ends with Aubin-Mercier on top, hammering away with short shots. Horcher landed the most significant blow, no doubt, but how will the judges view the late control and top position from Aubin-Mercier?

Aubin-Mercier looks fully recovered here, and he’s right back to work on Horcher’s right leg. Clearly, the strategy’s having an effect, too, as Horcher is noticeably ginger and calculated with his steps.

Horcher’s leg is cooked. As the round opens, he stands still, and Aubin-Mercier moves in, dumping him to the mat with ease. He goes back to work from half guard. They grapple against the fence, with Aubin-Mercier controlling the pace and position.

Less than 90 seconds in the fight, and Aubin-Mercier continues to grind away on top of Horcher.  The fights ends there, with Aubin-Mercier in total control.

Horcher scared Aubin-Mercier with that early left, but that marked his best offense of the fight, as the Canadian took over completely from there.

After some dominant grappling from top position, Aubin-Mercier takes home the unanimous-decision victory.