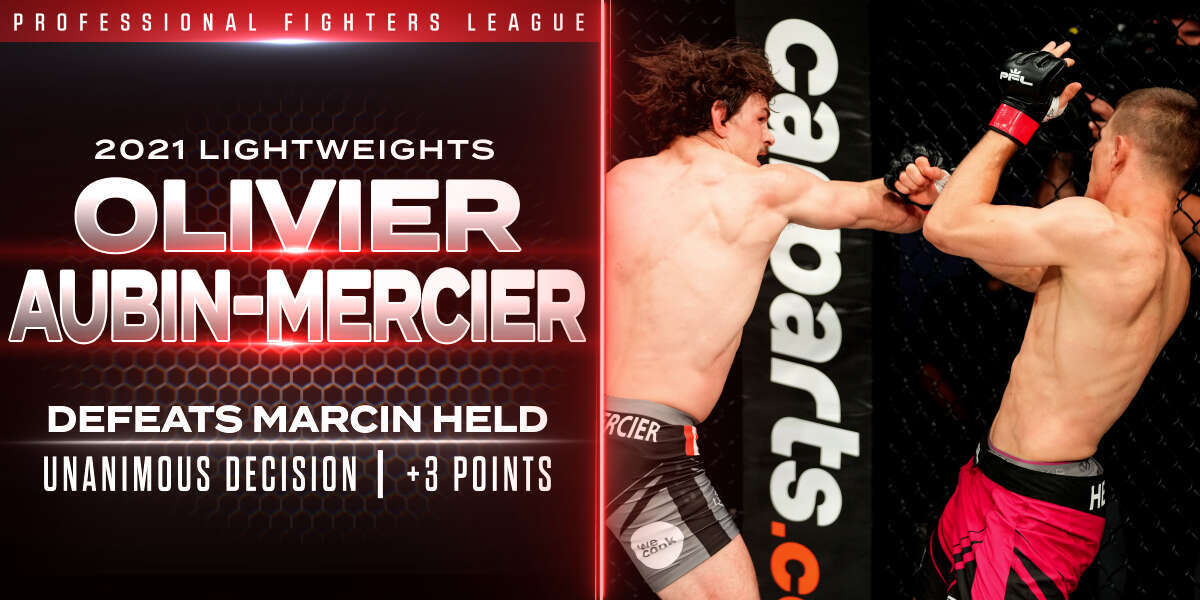 Aubin-Mercier showcases power and precision in victory over Held

Fresh off an impressive victory over Natan Schulte at PFL 1, 2021, Marcin Held looked to keep the momentum rolling against promotional newcomer Olivier Aubin-Mercier. Two well-known names in the Lightweight division, Held vs. Aubin-Mercier promised to deliver high-level, exciting action at PFL 4, 2021 — and it delivered.

Heading into the fight, Held could clinch a spot in the 2021 PFL Playoffs with a stoppage in any round. But did he get it?

Aubin-Mercier brings the pressure from the jump, forcing Held back toward the cage and keeping the heat on his opponent with punches. Held senses the opportunity to clinch and takes it, working Aubin-Mercier against the cage and attempting to finish the single-leg takedown. Aubin-Mercier underhooks and breaks away with 1:30 gone in the round.

At range, Aubin-Mercier catches Held with a nice left hand, but Held immediately responds with a body kick of his own. Aubin-Mercier throws a high kick that Held blocks nicely. Held again clinches and bullies Aubin-Mercier against the cage, but the Canadian once again separates and returns to the center of the cage. Aubin-Mercier looks for the big left straight, narrowly missing his target. He tries again, this time landing it to Held’s body. The two fighters clinch against the cage but are separated.

Following the separation, violence strikes as Aubin-Mercier shifts his stance and drops Held with a vicious right hand over the top. Sensing the finish, Aubin-Mercier swarms, but Held is able to hang on (literally) and ride out the final 15 seconds of the round. Still on shaky legs, Held returns to his corner to regroup for Round 2.

Held charges aggressively out of his corner, putting Aubin-Mercier on his heels. The two exchange strikes, with each man landing both to the body and to the head. With 1:20 gone in the round, Held shoots for the takedown, failing with his initial attempt but winding up clinging to the position against Aubin-Mercier on the cage. With nothing happening there, the referee separates them.

Two minutes left in the round, Aubin-Mercier opens up once again with big shots, seemingly hurting Held in the process. The two fighters clinch against the cage, with Aubin-Mercier this time the aggressor. The Canadian eventually drags the fight to the ground and works from top position, landing some shots and ending the round on top.

Held wings a massive left hand to open the round, missing as Aubin-Mercier smartly ducks out of the way. Undeterred, Held maintains the pressure and pace, making Aubin-Mercier think defensively for the bout’s opening minute. Despite the attack, Aubin-Mercier moves beautifully and avoids any serious punishment, landing a nice right hook-right uppercut combination before engaging Held against the cage.

Held drops for an inside heel hook, and Aubin-Mercier scrambles to defend — which he does beautifully. The two separate, and Held scoots toward Aubin-Mercier, hoping he’ll re-engage on the ground.

Returning to a standing position, the two strike for a bit before Held dives unsuccessfully for a takedown. Aubin-Mercier again clips Held with an uppercut, and they return to the cage once more. Again, Held drops for the leglock, but Aubin-Mercier easily steps out and returns to range. A clean check hook from Aubin-Mercier catches Held on the way in, and now the Canadian fighter initiates the clinch and presses Held against the cage.

Referee Gasper Oliver quickly separates them, and they strike at range to close out the fight. Again, Aubin-Mercier is just a step ahead, repeatedly countering Held and likely earning the decision victory.

And there it is.

Aubin-Mercier takes home the unanimous decision and three points in the process. While he’ll still miss the Playoffs, Aubin-Mercier proved he still has plenty in the tank and is still improving as a fighter.

Oh, and that victory — which prevented Held from gaining points — sends Loik Radzhabov into the 2021 PFL Playoffs. First a 27-second knockout victory and now a ticket to the Playoffs?

Not a bad night for Radzhabov, eh?