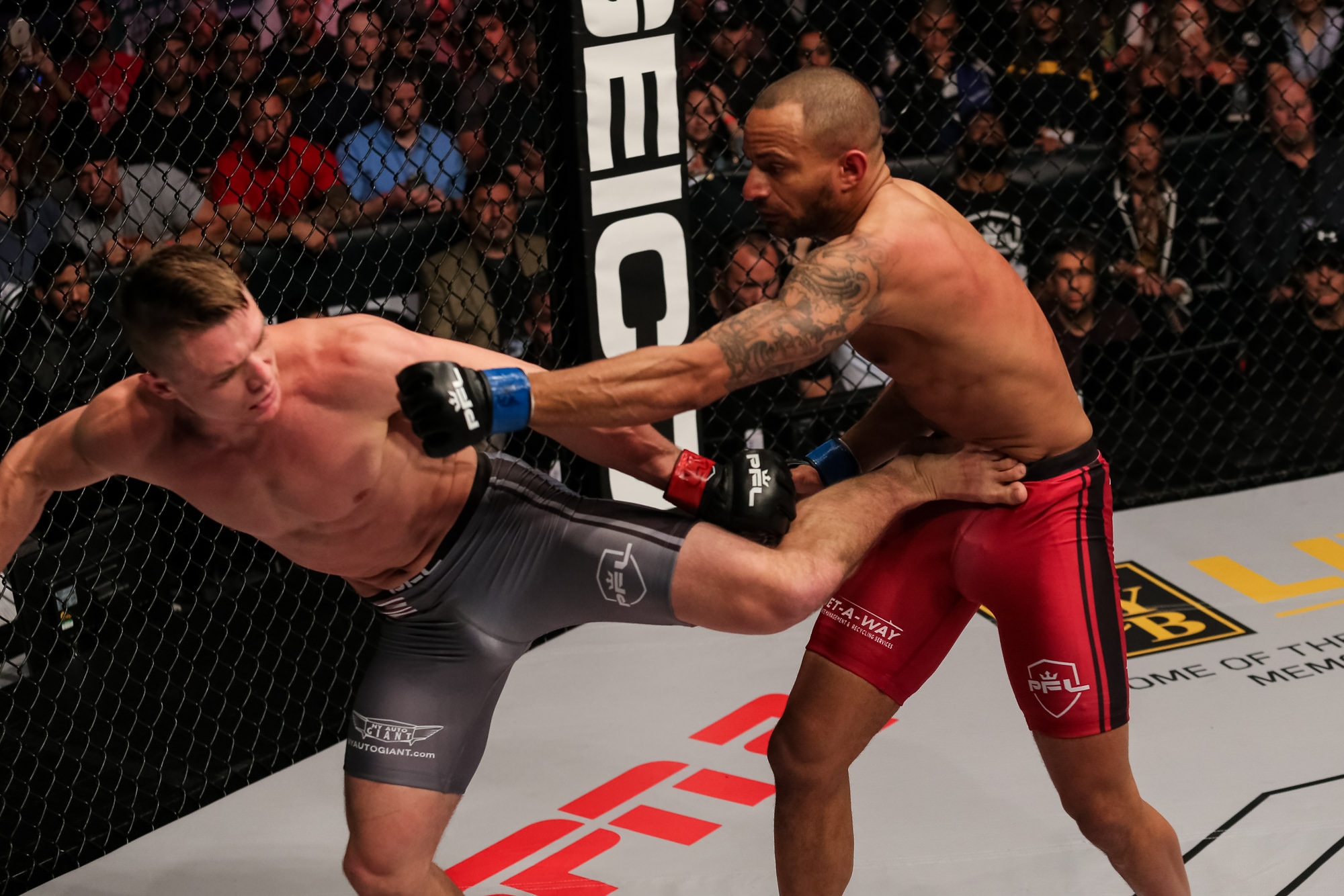 NEWS | What We Learned From PFL 2

The Professional Fighters League returned to NYCB Live’s Nassau Coliseum on Thursday, May 23 for the second installment of its second season and once again, the action didn’t disappoint. From top to bottom, the card produced four electrifying finishes and a plethora of entertaining bouts, including the fastest knockout in the history of the PFL.

In the featured bout of the ESPN+ portion of the card, 2018 PFL featherweight champion Lance “The Party” Palmer returned to action, scoring a unanimous decision victory over Alex Gilpin while earning three points in the process. 2018 PFL lightweight champion Natan Schulte was also in fine form with a first round, 6-point submission over new challenger Bao Yincang.

Also on the ESPN+ portion of the card, Long Island’s Chris Wade took on Nate Andrews in what turned out to be a highly intriguing back-and-forth lightweight bout. In the end, Wade, now nicknamed “The Long Island Killer”, picked up a unanimous decision victory and earned himself three points.

With the event now in the rearview mirror, let’s take a look at five things we took away from PFL 2.

10 Second Knee You Have To See

At the PFL’s first event of 2019 just a few weeks ago, Sadibou Sy scored a vicious 17-second knockout victory over David Michaud in what turned out to be the second fastest stoppage in PFL history at the time.

Just one event later, that trend of fast stoppages continued. At PFL 2, undefeated featherweight Movlid “Killer” Khaybulaev shook the arena with a sensational flying knee knockout that came just 10 seconds into his bout against Damon Jackson. Not only was it a vicious and perfectly timed strike, but the finish ranks as the fastest in the history of the PFL.

With the finish, Khaybulaev earned six points while soaring to the top of the 145-pound standings. He’s certainly a fighter to watch out for moving forward.

The Party is Getting Started

In the featured bout of the ESPN+ portion of PFL 2, returning featherweight champion Lance “The Party” Palmer returned to competition against Alex Gilpin.

Last season, the 32-year-old Palmer ripped through the PFL ranks, winning five-straight fights on his way to earning the 2018 145-pound title and $1 million. With that in mind, Palmer, now training under Mark Henry in New Jersey, was looking to pick up right where he left off on Thursday.

Early on, Gilpin, a former collegiate wrestler who held a 12-1 professional MMA record prior to PFL 2, seemed to be giving Palmer a bit of trouble. The defending champion then got the party started, however, dropping Gilpin with a powerful left hand in round one.

From that point on, Palmer continued to gain momentum and used his wrestling to control the action for the remainder of the bout. In the end, he scored a unanimous decision victory, earned three points, and proved to those watching that he was once again going to be a force to be reckoned with at 145 pounds.

Regardless, the 31-year-old has often admitted that last season did not turn out as he planned. The results led him to do some self-reflection and he’s vowed to bring a new and more aggressive style to the PFL cage in 2019.

Now dubbed “The Long Island Killer”, Wade certainly came out aggressive against opponent Nate Andrews on Thursday night, coming forward and throwing a plethora of kicks in the opening minutes of the bout.

Over the course of three rounds, the two went back-and-forth in a highly competitive fight, but it was Wade who gained the upper hand and earned three points with a unanimous decision victory. Not only did his revenge tour continue, but he proved that he’ll once again be a player at 155 pounds.

In a similar way to how Wade reminded us that he remains a player in the lightweight division, defending champion Natan Schulte did the same on Thursday night.

The 27-year-old Schulte, who now owns a 16-3-1 professional record, put together a 4-0-1 record throughout the PFL’s first season culminating in a decision victory over Rashid Magomedov that earned him the 155-pound championship.

And to begin his second season under the PFL banner, “Russo” once again let the masses know that he’s an elite level lightweight, the Brazilian made quick work of opponent Bao, finishing the fight via submission just minutes into the first round.

Schulte earned six points for his victory and took a first step towards securing another PFL lightweight title.

Despite being only 26-years-old, Luis Rafael Laurentino is a highly experienced combatant, having held a 33-1 professional record prior to PFL 2. And on Thursday night, he proved that he belonged on the sport’s grandest stage.

Taking on a highly touted contender in Jeremy Kennedy, who has had success competing against the sport’s best – 3-1 in UFC competition - many felt as if Laurentino would have a tough test in front of him.

When the opening bell rang, however, it was Laurentino who came out firing, controlling the action and getting off big shots. And it only took him 23 seconds to make a statement, landing a head kick and then finishing “The Bandit” off with a barrage of ground strikes.

While Laurentino may have been getting a bit overlooked prior to the start of season two, he’s now certainly established himself as a contender at 145 pounds.