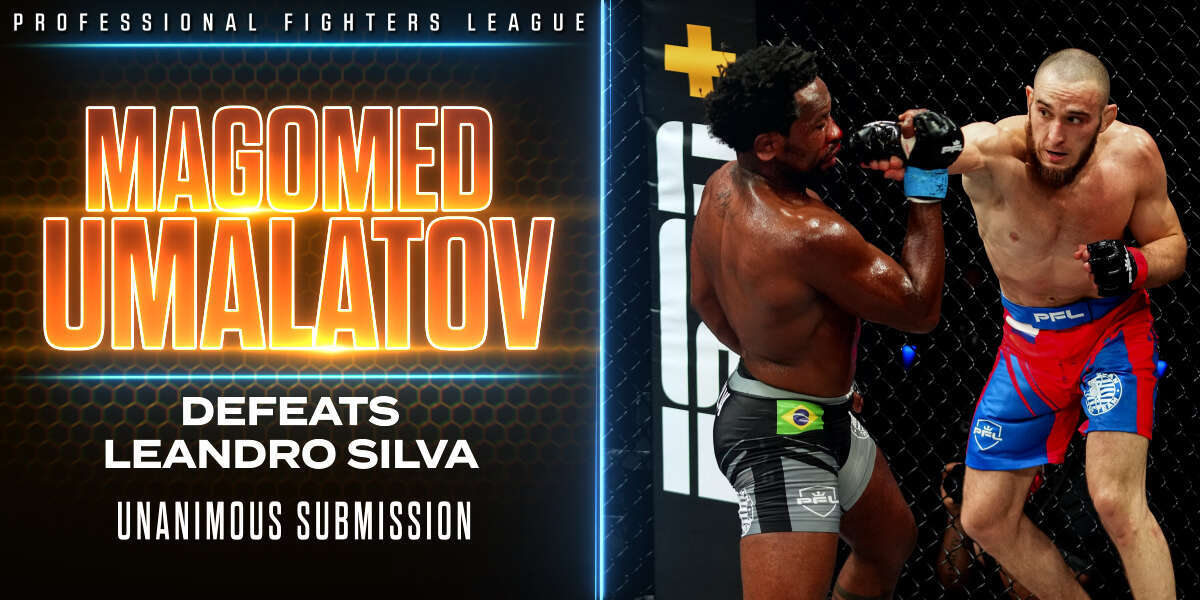 The undefeated Magomed Umalatov returned to the cage to take on UFC veteran Leandro Silva Friday evening at PFL Playoffs 1, 2021.

They touch gloves, and we’re underway. Cautious start to this one, with each man feeling things out and throwing light leg kicks and feints. Silva throws a hard leg kick and Umalatov grabs it, dumping his foe to the mat. He gives Silva time to get to his feet though, and they touch gloves, acknowledging the exchange.

Right hand from Umalatov glances off Silva, and they return to the center of the cage. More feints and some light kicks land before Umalatov uncorks a head kick. Silva defends well, blocking it without absorbing damage.

One minute left in the round, and Silva picks up the pace, pressing Umalatov on his heels momentarily. Umalatov launches a strong right hand in return, but Silva counters it beautifully, catching his foe on the return.

They finish the round as it began –– trading strikes on the feet. Tough round to score there, as each man had his moments of success with nothing of significance landing from either side.

Inside leg kick from Umalatov lands early, and he’s looking a bit more aggressive this round. Silva’s game though, countering well and landing a short uppercut inside as Umalatov moves forward. A series of kicks to the legs and body lands for Umalatov.

Umalatov looks to establish the jab, but Silva manages the distance well and avoids any punishment. Strong right hand counter lands for Umalatov, and Silva presses forward in return, looking to turn the tables. Nothing’s home, and Umalatov continues to press forward.

One minute left in the round, and it remains difficult to score. Both men appear to respect each other’s power, and neither has found the mark to this point. Silva attempts an Anthony Pettis-style “Showtime Kick” off the cage to end the round.

Silva pushes forward to begin Round 3, taking the center of the cage and moving Umalatov backward toward the fence. Umalatov moves well laterally, landing a series of leg kicks and some jabs in the process. Silva attempts a spinning attack but nothing’s home.

Flying knee glances off Umalatov, and a brief scramble ensues. Neither man establishes a dominant position, though, and they separate, returning to the middle of the cage to strike.

Less than one minute to go in the fight, and Silva remains the aggressor. Umalatov is countering well, and Silva continues to press forward, but nothing of major significance lands as the fight comes to an end.

Silva motions for Umalatov to “bring it” and they exchange strikes as the final bell sounds.

Nothing but respect after 3 rounds! We go to the judges. How did you score it at home?#PFLPlayoffs LIVE NOW
🇺🇸 ESPN+
🌍 https://t.co/WfOt9XBfzk pic.twitter.com/vOmHetdnLw

Umalatov held a 59-to-36 advantage in total strikes landed throughout the three-round affair, but was it enough to secure the decision?

He takes home the unanimous-decision victory and moves to 11-0 as a pro. That was a close fight, no doubt, but it represents valuable experience for the 29-year-old Russian as he continues his promising career.