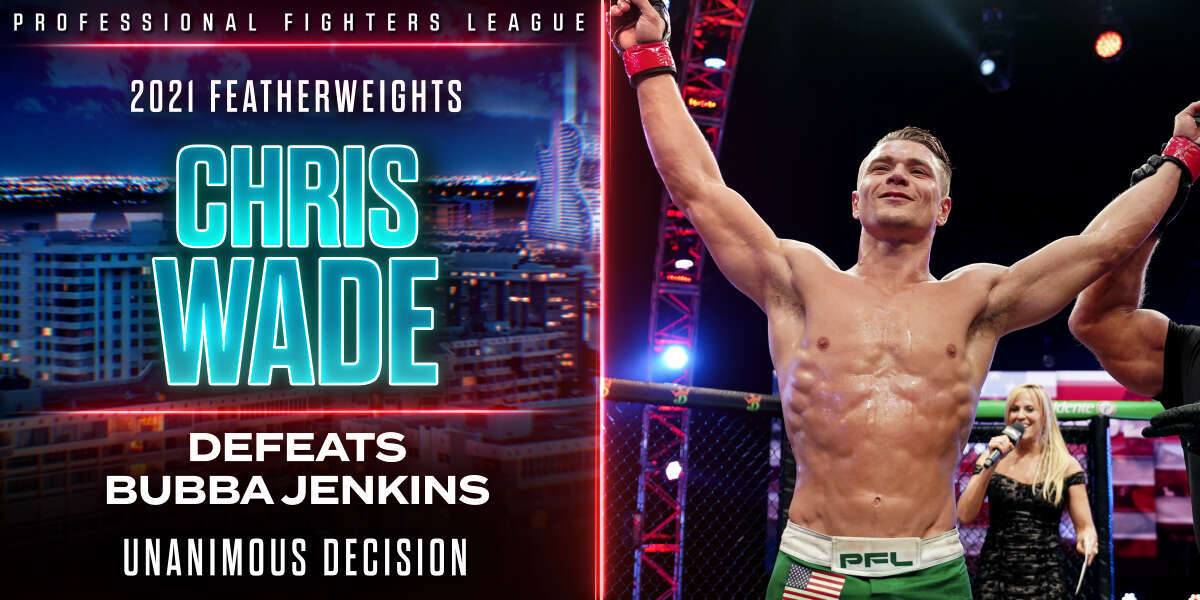 Third time's a charm for Chris Wade, who earns way to PFL Championship with decisive win over Bubba Jenkins

Wade (19-6), who trains out of Long Island MMA, makes his third consecutive trip to the PFL playoffs. This time around, however, the final was on his mind after his past two playoff runs were cut short in the semifinals.

Jenkins (16-4) joined PFL after an 8-3 run in Bellator. The former BRAVE featherweight champion was also a D-1 NCAA champion during his time at Arizona State. Jenkins snapped Lance Palmer's 11-fight winning streak in his PFL debut and aimed to keep the momentum of his five-fight winning streak rolling.

There was no feeling out process in this one. Immediately out of the gate, Jenkins came leaping in with a flying knee but soared over Wade. After a wild scramble, Jenkins was able to grab ahold of Wade and wrestle him to the mat. Jenkins was relentlessly trying to improve his position. Wade worked his way back to his feet, but Jenkins continued to hold onto his back and wasted no time getting the fight back to the mat. Wade threatened with a guillotine attempt, before Jenkins exploded out of danger and escaped to his feet. As Wade attempted a takedown of his own, Jenkins dug some heavy body shots into Wade’s ribcage. As the men grappled for position, Jenkins attempted an inverted triangle, but Wade was able to slip out of danger and ended up in top position with one minute to go. Jenkins was working to his feet, but Wade beautifully used the cradle to reverse position and put Jenkins back on the mat as the round expired.

Chris Wade uses a cradle to get on top! We go to the 2nd round!#PFLPlayoffs
LIVE NOW ESPN2 & ESPN+
🌐 https://t.co/WfOt9XBfzk pic.twitter.com/0kMpgyGmoM

Wade continued to put the pressure on Jenkins in the opening moments of the second round. Jenkins used a looping right hook to get inside and dropped levels into a takedown attempt. Wade used the cage to his advantage to avoid going to his back, before using a kimura to improve his position. Wade then switched to an anaconda choke and dug it in deep. Jenkins fought through until Wade broke his grip. Wade continued attacking Jenkins’s neck and chaining his submissions with another threatening choke that had Jenkins in full defense mode. Wade again threatened with a rear-naked choke while dominating position until the bell.

Wade opened the final round with a heel kick to the side of Jenkins’s face. Jenkins quickly managed to get the fight to the ground. Jenkins attempted to go for Wade’s but Wade escaped through the back door and ended up back in top position. Wade was staying in north south position until Jenkins figured a way back to his feet. Wade stayed on the ground and ended up in a bulldog choke that Jenkins quickly gave up on before going for the back. Jenkins took Wade’s back and began working on getting his hooks in, but both men were too slippery and Wade again shook Jenkins off. Wade took Jenkins’s back as the back-and-forth grappling exchanges continued. Wade again threatened with a guillotine choke and began celebrating as the final seconds ticked off of the clock.

Has Chris Wade finally gotten over the playoff hump? He could be heading to the #PFLChampionship. Official decision coming up!#PFLPlayoffs
LIVE NOW ESPN2 & ESPN+
🌐 https://t.co/WfOt9XBfzk pic.twitter.com/sbMDYOFPuc

The third time was a charm for Chris Wade, who entered the night as the betting underdog. When it was all said and done, it was Wade who was able to weather the early storm from Jenkins and put on a dominant performance over the stretch of the final two rounds. Wade was able to control the positioning throughout the fight and constantly threaten with submission attempts to keep Jenkins off of his game. Up next is the long-awaited crack at the $1 million championship prize.