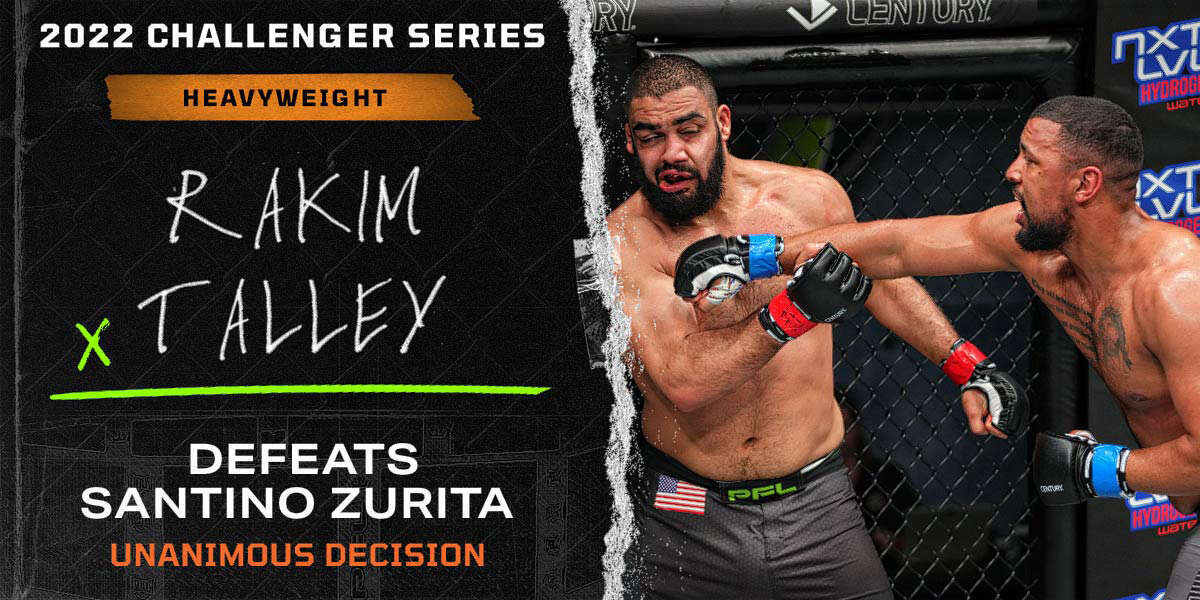 From the featherweights to the heavyweights we go. One fight after Daeri Alderman kicked off Week 7 of the 2022 PFL Challenger Series with a win, heavyweights Santino Zurita and Rakim Talley took center stage.

Fighting out of Xtreme Couture, Zurita makes his pro debut after just one amateur fight, a split-decision win back in October of 2018. While his amateur record isn’t exactly robust, he also fought for an amateur title in IKF Kickboxing and is a regular sparring partner of UFC heavyweight champion Francis Ngannou, so that’s gotta boost his confidence coming into this fight with Talley.

Across the cage, Talley brings a polar-opposite resume to the table. He fought 11 times as an amateur, going 9-2 with seven victories via finish. He is the former V3Fights amateur light heavyweight champion and now makes his professional debut at the age of 30 inside the PFL cage.

No touch of the gloves here, just big dudes getting to it immediately. Talley throws a high kick … and pokes Zurita in the eyes immediately. We have a break in the action here.

Zurita’s OK thankfully, and they’re back at it. Talley fakes a shot twice then comes in with an uppercut, and a furious exchange ensues. Both men are slinging heavy leather here.

They clinch against the cage with a minute gone, Talley pummeling under and looking to establish some control. Big knee into a left hook from Talley lands. That was slick and clean. More dirty boxing ensues here. They separate and exchange again, with Zurita getting the better of Talley this time.

Two minutes to go in Round 1, and they’re clinching against the cage, mixing it up with some more dirty boxing (much to the delight of celebrity judge Randy Couture).

They separate, and Talley throws a front kick that misses the mark. Left hook lands for Talley, and Zurita looks for the counter, but his foe’s just out of range. Zurita finds an opening and takes it, landing a series of nice punches there. Ten seconds to go in the round, and Talley finds two nice knees up the middle from the clinch.

Nice, back-and-forth round there. We’re off to the second frame.

They exchange jabs to start Round 2. Leg kick from Zurita hits the mark, and Talley pushes forward, closing the distance with punches. They hit the mat briefly, with Talley landing on top for just a second, but Zurita’s right back to his feet, and they clinch against the cage.

The action’s slowed a bit here, but Talley finds an opening from the clinch once again, firing away with some knees right up the middle. Zurita sneaks in an overhand right, and they clinch in the center of the cage. Some dirty boxing here and they separate.

The round ends in a clinch against the cage. That round definitely slowed the pace a bit, and it remains a tough fight to score, with neither man landing much of note or securing dominant position for any significant amount of time.

We’ll see if we get some clarity in Round 3.

Final round, and it’s kinda goofy early. Talley turns awkwardly out of a leg kick, and Zurita appears to land a shot to the back of the head in the process. The referee warns him, but there’s no break in the action.

Now, Zurita opens up with a nice combination, but Talley’s having none of it, and he’s immediately in on the clinch. This time, he’s looking for the takedown via crotch lift –– and he gets it, slamming Zurita to the canvas.

Talley wastes no time once the fight hits the mat, and he transitions to mount. Zurita scrambles and hip escapes, recovering half guard. Immediately, Talley’s passing the guard again, this time threatening with an arm-triangle.

Again, Zurita defends, but he’s clearly on the losing end of these grappling exchanges. Ten seconds to go, and Talley finishes on top, with Zurita just working back to his feet as the bell sounds.

All three judges agree on this one.