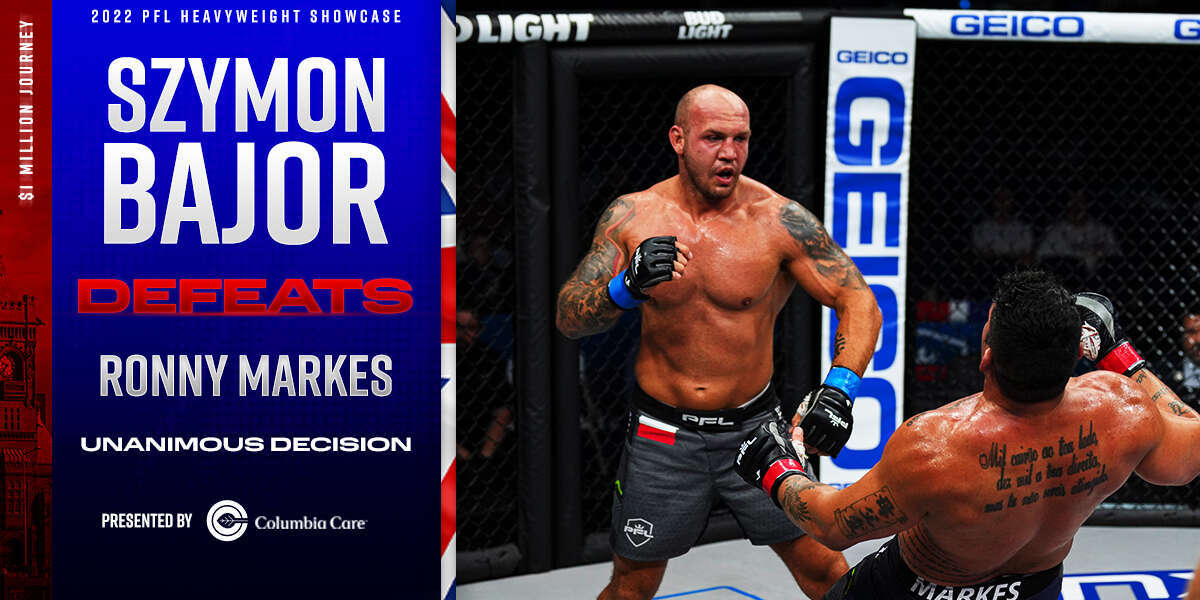 Szymon Bajor Extends His Win Streak to 4 in Impressive Showing

The PFL Playoffs return live from Cardiff, Wales for the Welterweights and Heavyweights! Kicking us off, we have a Heavyweight showcase bout between Ronny Markes (22-9) and Szymon Bajor (23-9). This will be Markes’ first fight under the PFL banner since 2019 as he steps in on only a few days notice to replace Hatef Moeil. Bajor rides a 3 fight win streak, all finishes, into this fight tonight as he looks to prove he belongs in the PFL. Notably, Bajor has not gone the distance in over 5.5 years and 10 flights!

The fighters touch gloves and we’re off! Markes opens with two heavy low kicks before changing levels and securing the takedown on Bajor.  Bajor quickly gets back to his feet but only briefly as Markes drags him back down to the mat and begins working to advance position.

Markes is doing a fantastic job mixing strikes into his attempts to improve position as he looks to pass to mount and potentially isolate the arm to set up an arm triangle.

Bajor gives his back in an attempt to get up and Markes quickly makes him pay for the mistake, taking the back and getting heavy on top to prevent Bajor from working back to his feet.  Markes is peppering knees to the thigh of Bajor before peeling him off the cage, taking the back once again, and getting both hooks in this time.

Bajor however does a good job to recover one of the hooks and he explodes out the backdoor, leaving Markes surprised and on his back as Bajor postures up and looks to do some damage with 90 seconds remaining in the round.

Now, Bajor is posturing up from half guard and raining down some heavy ground and pound on Markes, and Markes looks like he might be starting to tire.  As the round winds down, Bajor pours on the damage, ending the round in a very dominant position.

As round 2 begins, it’s Bajor on the offensive and pressuring forward backing Markes up into the SmartCage.  Interestingly, Bajor opts to shoot a takedown on the BJJ wiz, and he finishes it without much resistance.  We’re right back to Bajor getting off some ground and pound and Markes, an extremely skilled grappler, seems to have no answer right now.

Bajor passes to half guard and briefly attacks an arm triangle before Markes is able to push off on the hips and create enough space to temporarily negate the danger. Bajor is doing a fantastic job framing off the head of Markes with his forearm and then going to the body to setup a big opening up top.

Interestingly, with 90 seconds to go Marc Goddard stands the fighters up despite a relatively high level of activity from Bajor.

Bajor however is undeterred and strikes directly into the clinch and grinds Markes into the SmartCage, briefly attempting a takedown before they disengage.

On the break, Markes throws a flying knee and Bajor clips him in the air, knocking him straight onto his rear!  With 20 seconds remaining, Markes knows he just needs to survive the round and is able to do just that.

The final round is underway and it’s Bajor coming forward once again, landing a big right hand that draws a reaction out of Markes.  Markes recovers quickly and successfully shoots a double, getting the fight to the mat and taking the back of Bajor.

Markes attacks an arm triangle but doesn't have the position secure as Bajor is able to slip out and reverse position, winding up in top half guard again doing some damage.

This time, Markes is able to create a scramble and get back to his feet and disengage the clinch.  The fighters both swing wildly with both men exchanging before Bajor perfectly times up a double leg takedown.  Markes is unable to establish any real control however as Bajor is quickly back to his feet and attacking a takedown of his own.

Bajor lands a heavy uppercut in the clinch as the fighters break and return to the center of the SmartCage, exchanging some heavy punches before Markes secures his own takedown with about 90 seconds remaining in the fight. What a back and forth scrap this has been and what a pace both fighters are putting on!

Bajor returns to his feet again but Markes is attached to his back looking for another takedown, and after some jockeying for position Markes does secure a takedown briefly and that will end a fun back and forth fight!

FPR scores rounds 1 and 2 for Bajor and 3 for Markes, it’ll be interesting to see what the judges think!

Szymon Bajor extends his win streak to 4 in his PFL debut!